In this book, writes reviewer Barsanti, author Ashley Dawson sets out not just to prove how cities "are gravely threatened by climate change," but to also show how "capitalism and class feed into and even exacerbate that threat." 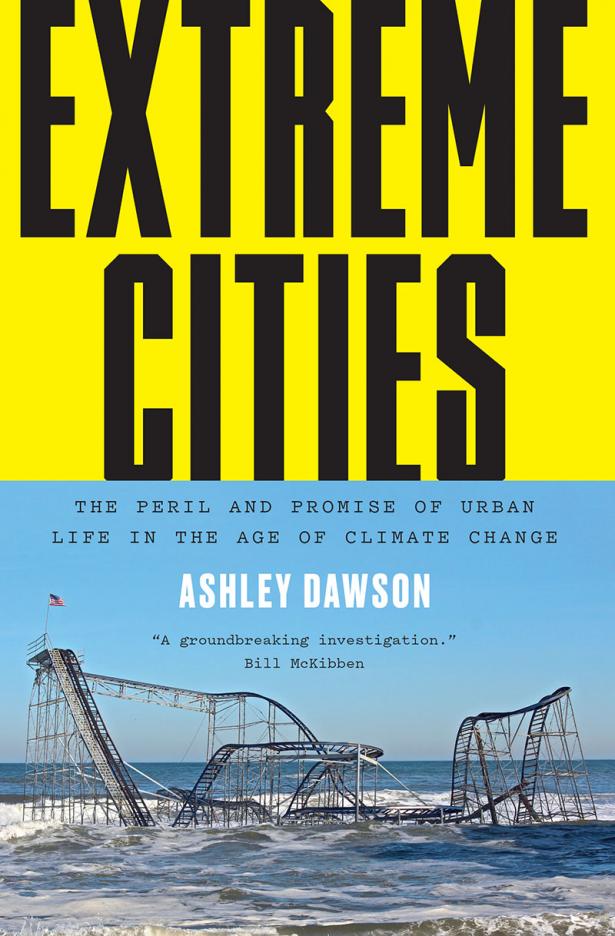 Extreme Cities: The Peril and Promise of Urban Life in the Age of Climate Change
Ashley Dawson
Verso
ISBN: 9781784780395

To an SUV-driving climate change skeptic living in some sidewalk-less exurb, most solutions proffered by environmentalists for saving the planet must seem like a kick in the teeth. Those plans' underlying assumptions are usually that energy-guzzling cars and big suburban houses are selfish and wasteful. They also assume that the cramped quarters and public transit networks of the city—where, let's be honest, a good many people who believe in environmental action already live—are virtuously efficient, by comparison. Ashley Dawson, in his scorching jeremiad Extreme Cities, wouldn't disagree with the root of that equation, but he rails with jackhammer force against the self-congratulation delivered by one set of city-dwellers to all the rest. Don't get too comfortable, Dawson says here, because cities "are at the forefront of the coming climate chaos." After all, most great cities were built around ports, and sea levels are rising.

In Extreme Cities, Dawson sets out not just to prove how cities from New York to Jakarta are gravely threatened by climate change, but also to illuminate the ways that capitalism and class feed into and even exacerbate that threat. For Dawson, a Marxist-inclined professor of English at CUNY and author of Extinction: A Radical History, cities are hardly a solution to climate change. In his anti-capitalist critique, they are emblematic of the mentality that drove humanity to this current state of affairs. He describes modern cities as money "sinks" where "real-estate speculation provides a way for economies to grow as production." So, even though logic would dictate transforming low-lying shorelines into storm surge-absorbing wetlands, planners in cities like New York and Miami continue building right up to the water line. Meanwhile, even conservative modeling has seas rising over six feet by 2100. Set against that inexorable future, Dawson's description of a "feckless capitalist culture of ruinous growth" has the ring of truth.

Extreme Cities is an angry book—as it should be. Dawson spreads his contempt around, though not always evenly; he spends little time bothering with those who doubt the reality of climate change. Rather, he conserves most of his ammunition for the impressive-sounding but ultimately futile and even harmful plans to make cities more resistant to destructive flooding. For one, those plans usually focus on protecting high-net-worth areas like lower Manhattan and pushing floodwaters into lower-income areas deemed less worth of protection. For another, Dawson argues, resiliency strategies "inadvertently build up risk by creating a false sense of security and hope."

To buttress this rationale, Dawson analyzes several urban resiliency plans. He finds nearly all of them lacking in both foresight and economic justice. A typical blueprint hatched to protect New York is the so-called BIG U, which proposed a ten-mile-long series of landscaped berms around the financial and business core of lower Manhattan. Dawson's acerbic note is a lesson in common sense: "storm surges of the future will certainly not stop in their tracks at 42nd Street, where the berm will end." He contextualizes such plans amidst a future of truly catastrophic urban environmental challenges, which he says are "likely to unfold as a slow cascade of rising mortality rates punctuated by spectacular disasters." Set against that backdrop, high-end environmentally-focused urban planning will at "at best . . . produce gated green enclaves." He excoriates the inattention to protecting working-class urban people and neighborhoods, in examples ranging from the deprioritizing of areas like Red Hook, Brooklyn after Hurricane Sandy to the lack of resilient and sustainable building in low-income areas. (Cities aren't exactly asking for LEED certifications in public housing.) At worst, according to Dawson, high-minded and highly-paid urbanists are fiddling while Rome drowns.

Heavily informed by Marx, Mike Davis, and Naomi Klein, Dawson's view of the environmental threats facing modern cities is useful for its emphasis on the interlaced nature of economics and political power structures when discussing the allocation of resources in precarious times. But there are times when this normally tight and fiery book could have used some reining in. His analysis of the decentralized, ground-up manner in which Occupy Sandy provided effective post-storm relief in underserved parts of New York is on the nose, but repetitive after a point. Dawson gives lip service to looking at the issue globally but he only truly drills down when it comes to New York. (Dawson hopefully will be able to address the devastation caused by Hurricane Harvey in future editions; he doesn't include Houston as one of his "extreme cities," but Houston's toxic brew of unplanned sprawl, unprotected petrochemical and fossil-fuel facilities, and extreme racial and economic disparities—all mashed together in a flood-prone plain whose vulnerability to climate change—exacerbated super storms was heightened by the loss of wetlands to unchecked development-works as an excellent case study for all the problems Dawson highlights.)

Like many writers before him, Dawson also falls prey to the temptation of the ever-expanding holistic viewpoint. It's one thing to point out that capitalist impulses are trapping more and more capital in doomed coastal cities. It's quite another to lambast a hero like environmentalist Bill McKibben for comparing the climate change fight to World War II. Dawson pedantically carps about this analogy because the Allied powers "were both capitalist and imperialist." Certainly that's true. But it doesn't mean the Nazis didn't need defeating.

Where it matters, though, Dawson outlines the existential dilemma facing coastal cities, and the refusal of various powerbrokers to acknowledge that reality, in bold and frequently horrifying terms. One of the book's most vivid moments comes when he's talking with Hal Wanless, a geological science professor at the University of Miami, about the status of that slowly drowning city. "I get Wall Street people calling me all the time," Wanless says, "asking if they can get eight or nine years out of a condo on Miami Beach." How many other urban districts, one wonders, have already been written off, with their residents none the wiser?