poetry What We Did in the Resistance (Part 1)

California poet Alison Luterman moves the reader from the despair of the 2016 election to the longer passage “of empire and uprising,/ extinction and evolution….” 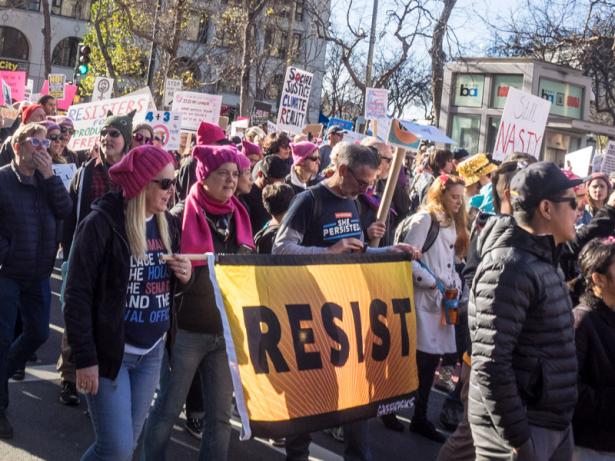 What we did in the resistance, www.jeannetteferrary.photoshelter.com

What We Did in the Resistance (Part 1)

In the beginning, we wept.

Well, some of us wept.

Some of us walked around stunned

as if pieces of sky

had fallen out of the sky and revealed themselves

to be chunks of blue plaster.

We examined the chunks.

We shook plaster dust out of our hair--there was so much dust!

We craned our necks and stared up.

Now we saw the scaffolding,

The drywall, the lath. We saw the insulation,

full of asbestos, we saw how the walls were stuffed

was revealed, yet nothing was clear.

If we were in a cunningly-devised structure

not of our making, was it a theater

or a prison, a shopping mall or a mausoleum?

In the beginning, as I have said, we wept.

We embraced on the street when we saw each other.

We sat in cafes drinking coffee, digesting our grief.

The rest of the time we sat in front of glowing screens.

We gathered at night and made signs:

Not My President and Pussy Grabs Back;

we stapled them to sticks

and marched in exultation all over the world.

We had never seen before how many of us there are.

We clicked and liked and signed and donated and called

our Congresspeople, and sent postcards and checks.

We spoke of girding ourselves for the long fight.

in the footsteps of the elders, we spoke

of coal miners in Pennsylvania and Kentucky

who had voted for Trump.

And still the cat box needed to be cleaned, the oil in the car changed,

And still the rains came down, epically, biblically--

we joked about End Times--and the witching trees

with their bare black branches sprouted the tiniest of new buds,

almost invisible at first, a red tip at the nodes, a subtle fire,

and then overnight, purple blossoms.

Trees who know nothing of elections, who preach only

the gospel of persistence. For,

despite everything, earth continued to turn

from light to darkness and into light again,

over and over it rolled,

as it had been rolling through generations of empire and uprising,

extinction and evolution, and once again

to our surprise we noticed that it was Spring.

Alison Luterman has published three books of poetry: The Largest Possible Life; See How We Almost Fly; and Desire Zoo. Her poems and stories have appeared in The Sun, Rattle, Salon, Prairie Schooner, Nimrod, The Atlanta Review, Tattoo Highway, and elsewhere. She has also written an e-book of personal essays, Feral City, and more than half a dozen plays. She performs with the Oakland-based improvisation troupe Wing It! and given writing workshops around the country, including at Omega and Esalen Institutes. She teaches memoir at The Writing Salon in Berkeley.