labor How We Won a $15 Minimum Wage and More 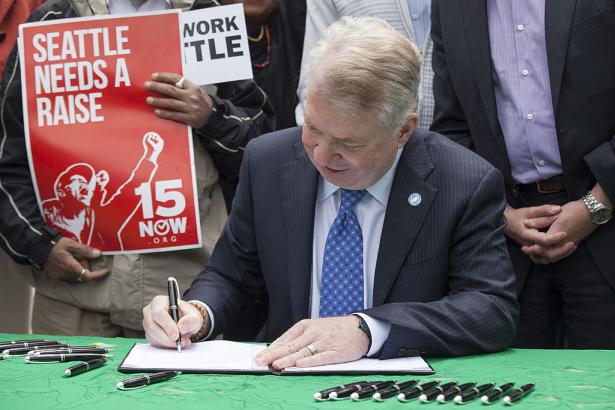 This week marks the fifth anniversary of the passage of Seattle’s $15-an-hour minimum wage law, the first such law in the country. At the time it passed in 2014, strikes were rare and victories for working-class people were few and far between, so it was a startling development. Since then, Seattle has inspired many similar campaigns and victories nationwide. The result of long, hard organizing and lobbying work by SEIU and other groups, Seattle’s law came just after the 2013 election of councilwoman Kshama Sawant, a member of Socialist Alternative, who’d made the $15 minimum wage a cornerstone of her campaign — another startling election victory back in those benighted pre-Rosanna Rodriguez days. There’s now been plenty of time to study its results, and while the policy has been a success by nearly any measure, Seattle’s experience also shows the limitations of single-issue reform.

The question of how to measure the impact of Seattle’s $15 wage is a complicated one. Some important facts are that Seattle’s wage hike, which was phased in gradually, raised hourly wages for workers and has not, contrary to right-wing predictions and liberal fears, cost jobs. According to Stephanie Luce, professor of labor and sociology and the CUNY School of Urban Studies and author of Fighting for a Living Wage, this is consistent with research on wage increases around the world. Businesses didn’t leave Seattle, nor have entrepreneurs been deterred from starting new ones there. The concern trolls have mostly been wrong and the always-touted “unintended consequences” have not come to pass.

However, one study, conducted by the University of Washington’s Jacob Vigdor and co-authors, using extensive state employment data, did find that employers cut back on entry-level workers’ hours as a result of the policy, undercutting overall earnings gains. That study had its critics, who noted that Vigdor and his colleagues excluded some large chain stores, for example. I’d also add that one of Vigdor’s co-authors was on Amazon’s payroll! A 2017 study by the Institute of Self-Reliance found that while warehouse workers are generally badly paid, Amazon is a standout in this space: in the eleven metro areas studied, the company paid its warehouse workers, on average, 15 percent below the prevailing wage. So, the company just might have an interest in this topic.

But regardless of the merits of any given study, the Left should acknowledge that it’s possible for single-issue reforms to backfire on some workers. In fact, without reducing the systemic power of bosses and increasing that of workers, it’s nearly impossible to design policy that doesn’t hurt someworkers. “Employers are always going to find ways.” says Luce. “They’re going to retaliate. If you make an improvement here, they’re going to look for cuts there.”

Although many in the Fight for 15 movement want to emphasize how helpful high wages are for business, and how little impact there is on the employment rate — and that’s often true — those shouldn’t be the criteria we on the Left use to evaluate policy. What if a city less prosperous than Seattle tried to mandate a wage hike during an economic downturn instead of a boom? Workers have tried to organize for $15-an-hour in Cleveland, for example, and they’re right to do so. If they were to win, that city could conceivably lose some jobs — and we should admit that this could happen.

“Maybe we do want to eliminate a whole bunch of bad low wage jobs with no hours,” says Luce. “Let’s set the wage to cover the cost of living and if there’s job loss, address that through other policy measures.” Rather than defending our opportunity to work two weekend shifts at Chipotle, we should all be fighting to raise wages, but also to boost workers’ economic security by strengthening the public sector, courting better industries, improving cash assistance, and socializing health care. Above all, the policies we fight for should build workers’ power.

Capital has a formidable capacity to adapt and still reap profits even when workers win reforms. That’s why movements always have to think beyond specific policies, anticipating capital flight, capital strikes, and all the other dirty tricks of the boss class, and building worker power to fight them. Efforts like Fight for $15 need to be accompanied by an expansion of union organizing in low-wage sectors, so that workers have the capacity to meet capital’s defense with ever-stronger offense. Union members, more than other workers, can decide what their wages should be and what kinds of risks they’re willing to take to get them. If they do lose hours to a wage increase, fight back. Rather than ask whether jobs or hours were lost when Seattle got a raise, Luce suggests a better question about the $15-an-hour wage laws: “Are they building momentum for other kinds of worker gains?”

The answer in Seattle is yes. The wage gain has increased workers’ confidence. By reducing turnover — which even Vigdor’s research agrees that Seattle’s law has done — it’s also given workers more stability, a much better condition for organizing. More fast food workers are contacting unions, asking how they can organize their workplaces.

Even those who aren’t forming unions are organizing in other ways. One group of Starbucks workers is organizing for better enforcement of a fair scheduling law, hoping to correct the very problem identified by the Vigdor study. All in all, says Luce, a victory like Seattle’s $15-an-hour wage “reshapes people’s sense of what’s possible.”

[Liza Featherstone is a staff writer for Jacobin, a freelance journalist, and the author of Selling Women Short: The Landmark Battle for Workers’ Rights at Wal-Mart.]

The new issue of Jacobin on the housing crisis and capitalism is out now. Get a discounted subscription today.