food What’s in a name? The battle over alternative meat, milk and rice labeling rages on.

How should we label products that imitate other products? Who has the right to use certain words? What do those words truly mean? 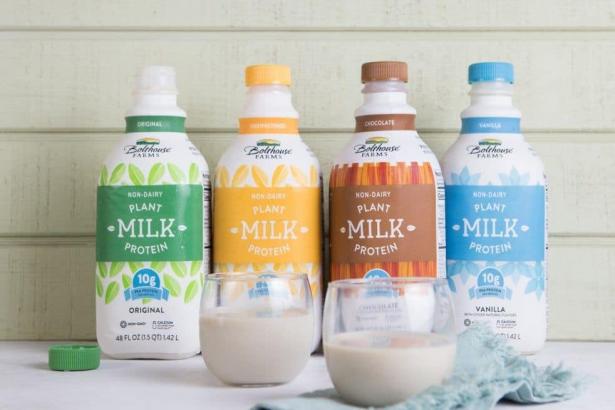 The dairy industry has long fought against plant-based beverage producers calling their drinks “milk.”, Jennifer Chase for The Washington Post

If you’ve had any “almond drink” lately, you might have noticed that there’s a semantics battle happening among America’s food producers, politicians and public. At its heart are the questions: How should we label products that imitate other products? Who has the right to use certain words? What do those words truly mean?

Culinary innovation and the lightening of the American diet has given us an abundance of options. If we’re cutting carbohydrates, we can have cauliflower rice instead of regular rice. Folks with dairy allergies can opt for soy milk instead of dairy milk. And vegans and vegetarians — as well as people trying to scale back their meat consumption for health or the environment — have been delighted by the arrival of plant-based burgers that more closely replicate meat than veggie burgers.

But legislation around the country and world aims to block newcomers from being able to use some of those words to describe their products. It’s all in service of reducing consumer confusion and protecting their businesses, say proponents of the milk and meat industries — and recently, the rice industry has joined the fight. The people who make and advocate for plant-based meats and milks, and veggie-based rices, counter that consumers aren’t buying these products because they’re confused and think they’re something else; they’re buying them because they know the products are alternatives, and these consumers want them.

Here’s a briefing on the latest in the linguistic fight for your dinner plate.

Non-rice “rices” have proliferated in recent years, thanks to the Paleo diet, which popularized cauliflower rice. Other vegetables soon followed: Now, if you walk down the frozen aisle of a grocery store, you can buy rices made of broccoli, sweet potato, beets and butternut squash. A new form of alternative rices has popped up in recent months, too: Legume and chickpea rices are a high-protein alternative rice, from the companies Banza and RightRice. They’re made in a similar manner as chickpea pasta but cut to be rice-shaped — so they’re very similar to orzo.

But in Arkansas, beginning in August, these products can no longer be called “rice.” Arkansas Gov. Asa Hutchinson signed a bill last month that aims to protect the state’s meat and rice producers. Most of America’s domestically grown rice comes from Arkansas, and producers fear that rice alternatives will harm their businesses.

“This law only affects people who want to deceive the public about how their food originated,” Arkansas state Rep. David Hillman, who introduced the legislation, told the Arkansas Democrat-Gazette. “And if you’re not trying to deceive the public, this will not affect you or any of the outlets who sell these products.”

However, “ricing” is also a verb — “to reduce to a form resembling rice” — and the products are permitted to be labeled in this way. So Arkansans won’t be buying cauliflower rice, but they can purchase “riced cauliflower.” Many large companies, such as Green Giant, already label their vegetable rices this way. Manufacturers selling “cauliflower rice” after the deadline will be fined $1,000 for each mislabeled product. Restaurant labeling was not included in the bill.

Louisiana is considering such a bill. Shreveport, La.’s KSLA News reported that the state used to have more than 1,000 dairies, but there are now fewer than 100. “If we don’t protect our industry, we won’t have an industry to protect,” Louisiana state Sen. Francis Thompson told the station.

The Maryland Senate recently gave its approval for the state to join North Carolina in a compact to enforce nondairy labeling standards. The legislation still needs to be approved by the governor and House of Delegates — and even then, it won’t be enforceable until other states sign on.

Proposed dairy labeling legislation is “good old-fashioned protectionism,” wrote Paul Shapiro, the author of “Clean Meat: How Growing Meat Without Animals Will Revolutionize Dinner and the World,” in an opinion piece for The Post.

Meat producers aren’t too happy with the Beyond Burger and the Impossible Burger. The two plant-based burgers are famous for how well they can substitute for meat — they even “bleed” thanks to ingredients such as beets, which replicate the color of a burger’s juices. But industry lobbyists are ramping up their efforts to prevent these companies from being able to use the word “burger.” Last year, Missouri passed a law that penalizes companies that label plant-based products with certain animal meat descriptions, such as “ground beef style,” with fines or jail time. Vegetarian protein companies sued the state, which settled. In February, the New York Times reported that “beef and farming industry groups have persuaded legislators in more than a dozen states to introduce laws that would make it illegal to use the word meat to describe burgers and sausages that are created from plant-based ingredients or are grown in labs.”

“Five or 10 years from now, fake meat will have a product that is viable from a cost standpoint,” Kevin Kester, the former president of the National Cattlemen’s Beef Association, told The Post. “We have to make sure that everyone plays by the same rules.”

It’s not just an American thing. Last week, a committee in the European Parliament passed an amendment prohibiting plant-based products from being labeled as steak, sausage, escalope, burger and hamburger. The measure will be voted on by the full Parliament after its elections, before being put to member states and the European Commission, the Guardian reports. The measure was opposed by environmental groups, who feared it could discourage plant-based eating.

“We felt that steak should be kept for real steak with meat and come up with a new moniker for all these new products. There is a lot to be done in this front, a lot of creativity will be needed,” Eric Andrieu, a French member of the European Parliament, told the Guardian.

It’s led to a lot of jokes this week about what plant-based burgers in Europe will be called. “Veggie discs” has become the running gag, and it does have a certain ring to it.

Correction: A previous version of this story said that the Missouri lawsuit was settled, as per a St. Louis Post-Dispatch report. The lawsuit is in the process of being settled.