From a CIA coup and supporting the Shah’s brutality to enabling chemical attacks, shooting down a civilian airliner and training terrorists,‘aggression’ between the US and Iran is overwhelmingly one-sided. 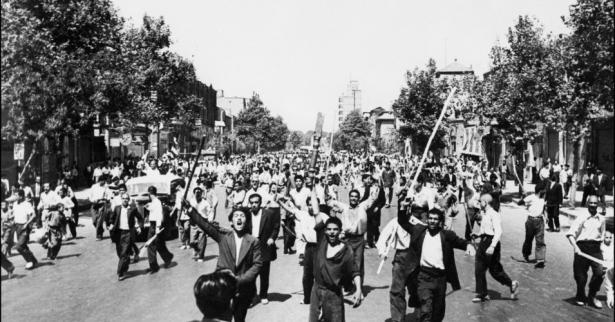 On August 19, 1953, democratically-elected Iranian Prime Minister Mohammad Mossadegh was overthrown in a coup orchestrated by the CIA and British intelligence, after having nationalized the oil industry., INTERCONTINENTALE / AFP) (Photo: /AFP/Getty Images

Someone attacked two oil tankers in the Gulf of Oman last week. The Trump administration wants the world to believe that Iran is the culprit. Yet there is no serious evidence that Tehran was behind the attacks on the Norwegian and Japanese ships. Not only is there no proof of Iranian involvement, such an attack by Iran makes no sense at all. Japan and Iran are friends. Just last month, Japanese Prime Minister Shinzo Abe — who was visiting Tehran during the tanker incident — affirmed this friendship in the presence of Donald Trump during the US president’s recent state visit to Japan. Most importantly of all, the crew and owner of the Japanese tanker attacked in the gulf vehemently reject the US claim that the vessel was damaged by a mine, asserting instead that a “flying object” struck the ship.

Still, Secretary of State Mike Pompeo blamed Iran for what he called a “blatant assault” on the tankers. Pompeo also said that the attacks “should be understood in the context of 40 years of unprovoked aggression” against the US and other “freedom-loving nations” by Iran. There is no such history. Iran hasn’t started a war since the mid-19th century, when it was still the Persian Empire. The true context which must be understood is one of a century of US and Western exploitation of Iranian people and resources, and decades of US threats and aggression against Iran that once reportedly included a plan to stage a false flag attack very similar to last week’s tanker incident.

Many Americans suffer a collective historical amnesia that renders a true and complete understanding of the causes, conduct and consequences of their nation’s perpetual conflicts all but impossible. This explains why most Americans trace the origins of US-Iran enmity to the 1979 hostage crisis, when Islamists occupied the US Embassy in Tehran for 444 days and Iran was transformed from close ally to arch-enemy practically overnight. US leaders and media portrayed those young revolutionaries as wild-eyed Muslim fanatics consumed by irrational hatred of the United States. Their legitimate grievances, chief among these the repression and brutality of the US-backed regime they dethroned, were ignored.

Pompeo’s preposterous claim that the US wants to “restore democracy” to Iran begs the question of when Iranians ever enjoyed democracy in the first place. The closest they ever came was in the early 1950s, when the reformist prime minister Dr. Mohammad Mossadegh set out to end British and American exploitation of Iranian oil resources by nationalizing the assets of companies including the Anglo-Iranian Oil Company, which despite its equitable-looking hyphenation was really a British-owned near-monopoly known today as BP. Iran’s monarchy, led by Mohammad Reza Shah Pahlavi, had sold out his country to foreign capitalists to the extent that one State Department official wrote in 1942 that the US would “soon be in the position of actually running Iran.”

Emboldened, perhaps, by President Harry S. Truman’s hollow promise to “assist free people to work out their own destinies in their own way,” Iranians rallied behind Mossadegh as he fought to take what was rightfully Iran’s back from foreign predators. In addition to nationalization, he expelled foreign technicians from oil refineries and even broke off diplomatic relations with Britain. Mossadegh’s was the most popular and democratic government Iranians had ever known. Time magazine, in naming him its “Man of the Year” for 1951, called him “the Iranian George Washington.”

The British were nearly as infuriated by Mossadegh as they had been by the original George Washington, and London enlisted its former colony to hatch a plan to depose the Iranian leader. Truman demurred but his successor, Dwight D. Eisenhower, was game. Secretary of State John Foster Dulles and his brother, Central Intelligence Agency Director Allen Dulles, had both previously worked as lawyers at a firm that represented Anglo-Iranian Oil. In 1953 the CIA launched a coup, codenamed Operation Ajax, which fomented unrest through violence including false flag attacks on religious leaders that were then blamed on pro-Mossadegh communists. A very reluctant Shah was swiftly restored to his throne and Mossadegh was deposed and imprisoned. US corporations then seized control of 40 percent of Iran’s oil fields.

In order to help the Shah maintain an iron grip on Iranians, the CIA, along with Israel’s Mossad, created SAVAK, the notoriously brutal state security force whose tortures included amputations, electric chairs and anal rape with electric cattle prods. The CIA reportedly taught SAVAK how to torture men and women and filmed these sessions for instructional purposes. Meanwhile, five successive US presidents lavished the Shah with aid and arms. Jimmy Carter, the so-called “human rights president,” feted the dictator at a 1978 White House New Year’s Eve soirée, toasting his “brilliant leadership” as angry protests against his ill-fated regime’s tyranny raged outside.

Forty years ago, long-simmering animosity toward the United States inevitably boiled over, culminating in the now-familiar events of those 444 days in 1979-81. Instead of acknowledging its role in stoking the flames of revolt, the Carter and Ronald Reagan administrations partnered with an even worse dictator than the Shah, Saddam Hussein in neighboring Iraq, as it attempted to thwart Iran’s nascent Islamic Republic. In 1980 the US encouraged Hussein to invade Iran, providing crucial support— including the transfer of deadly chemical and biological materials Iraq weaponized and unleashed upon Iranians and Iraqi Kurds — in an eight-year war of attrition that claimed more than a million lives. Reagan officials knew for years that Iraq was attacking Iran with WMDs but kept up US support while publicly denying knowledge of Iraq’s heinous war crimes.

As the war died down, an accidental US attack on Iran further inflamed Iranians. On July 3, 1988, the USS Vincennes, which was in Iranian waters, shot down Iran Air Flight 655, killing all 290 passengers and crew aboard, including 66 children. An indignant Reagan blamed the “barbaric Iranians” for the wholesale aerial slaughter; Vice President George H.W. Bush, who was running for president, infamously spat, “I will never apologize for the United States of America. Ever. I don’t care what the facts are.”

Fast-forward to the second Bush presidency, when provocation toward Iran escalated to the brink of all-out war. In addition to senior US officials’ constant threats and even jokes about bombing “Axis of Evil” member Iran, the US secretly deployed Special Forces troops inside Iran on reconnaissance missions and to forge alliances with dissident groups. Chief among these was the People’s Mujahedin of Iran (MEK), a State Department-designated terrorist group that had previously assassinated six US officials when it was fighting the Shah’s regime. Despite this, the US military secretly trained MEK fighters while the terror group paid leading US officials to lobby for its cause.

The Bush administration also pressured the World Bank into suspending emergency relief aid after the 2003 Bam earthquake, which killed more than 26,000 Iranians, and imposed harsh new economic sanctions on Iran which continue to cause great suffering for ordinary Iranians even as a well-connected elite grows fantastically wealthy. Bush-era war plans against Iran reportedly even included a false flag plot hatched in Vice President Dick Cheney’s office to send Navy SEALs in boats disguised as Iranian naval vessels to attack US warships in the Straits of Hormuz.

The menacing of Iran continued unabated through most of Barack Obama’s administration, when Israeli and/or US assassinations of Iranian nuclear scientists, cyber attacks and sabotage — actions that would surely be seen as acts of war if they were committed against the United States — occurred along with the usual threats of war. Meanwhile, the administration sold a record amount of weapons to Iran’s adversaries, further inflaming tensions in the world’s most volatile region. Obama ultimately chose cautions cooperation over confrontation with Iran. His wise decision led to the landmark 2015 Iran nuclear deal, a highly controversial move that faced strong bipartisan opposition from liberal lawmakers as well as from Republicans including neoconservative hawks like John Bolton, who has been itching to bomb Iran for decades — and who is now President Donald Trump’s national security advisor.

US and Israeli intelligence agencies have long asserted that Iran is not trying to develop nuclear weapons, and even President Trump has admitted that Iran was complying with the terms of the nuclear deal. Trump nevertheless withdrew the US from the agreement, with predictably dangerous consequences as Iran’s leaders, like so many before them, realized that a deal with the United States all too often isn’t worth the paper it’s written on. The administration and its allies in Congress and the corporate mainstream media have ratcheted up their warmongering against Iran to a near-fever pitch, all based upon “evidence” every bit as suspect as the lies that led to the disastrous invasion and occupation of Iraq. It is unclear who attacked the Norwegian and Japanese oil tankers in the Gulf of Oman last week. What is clear is that a world wary of US lies and endless war isn’t buying the Trump administration’s story.

Actors including Israel, Saudi Arabia and some in the Trump administration seem hell-bent on waging a war against Iran that would ideally end in the overthrow of that country’s Islamist regime. Iran isn’t without its serious faults. However, these pale in comparison to those of the US, which has — and has used—  nuclear weapons, staged or supported numerous coups, attacked half a dozen Middle Eastern countries already this century and nearly encircled Iran with military bases. Iran has no nuclear weapons, no bases within 10,000 kilometers of the United States and has never directly attacked the US or, of course, overthrown its government. Who is the real aggressor here?

We want a more open and sharing world.

That's why our content is free. Free to read. Free to republish. Free to share. With no advertising. No paywalls. No selling of your data. How? Nonprofit. Independent. Reader-supported. Please donate today.