The Infamous Birth of the Custer Myth

On this date 143 years ago, America began creating the Custer myth, much of which survives today 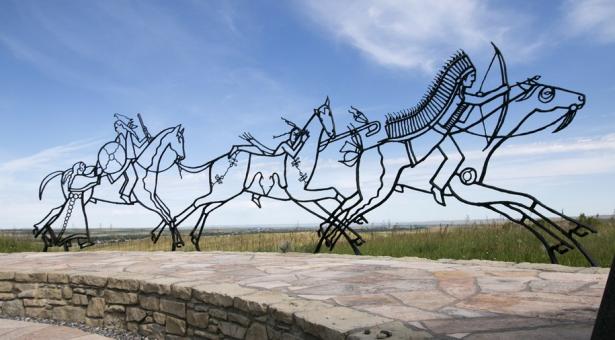 The bronze Spirit Warrior Sculpture looms over the horizon at the Indian Memorial at the Little Bighorn National Monument. The sculpture by Ogalaartist Colleen Cutschall depicts three Native American warriors riding off to battle, Meteor Blades

"There are not enough Indians in the world to defeat the Seventh Cavalry." George Armstrong Custer (1876)

The Custer Myth is a living thing, which refuses to die despite the efforts of careful historians to reduce it to uncontroverted facts. Almost everything about it is in some degree disputed."
—The Custer Myth, by William A. Graham (1953)

On June 25, 1876, the Custer myth got its start as Sioux (Lakota, Dakota), Cheyenne (Tsitsistas), and Arapaho (Hinono'eino) warriors defended themselves and their families against the U.S. Army's Seventh Cavalry in Medicine Tail Coulee and the surrounding area on the Greasy Grass River (Little Big Horn) in Montana Territory. When the shooting was over, five companies of Lt. Col. George Armstrong Custer's command had been wiped out, with 262 men dead and 68 wounded, half the entire 586-soldier battalion. So startling was the Native victory that when Crow (Apsáalooke) scouts who had been riding with Custer met up with Gen. Alfred Terry the day after the fight and told him what they had seen, he refused to believe them.

So why even care about this event from the distant past in which all the participants and most of the children of every participant are long dead? Because the myth continues today to have a stereotyping impact, warping how non-indigenous Americans view Indians, not just the Lakota, Cheyenne, Arapahoe, but all Indians.

Since that June day 143 years ago, hundreds of books, most of them bad and some of them brimful of outright lies from beginning to end, and more than 50 movies, most of them dreadful, have kept the myth (or collection of myths) flourishing except among the best scholars. A good deal of this was spun into being by Libby Bacon Custer, the brevet general’s widow, who wrote three books glorifying her husband and transforming him from a reckless, aggressively ambitious military politician into a heroic legend. For most Americans historically, and many still today, Custer’s “last stand” represents the most important part of the story passed down over the decades, the Indian side of what happened as well as contrary white survivors’ versions ignored or denigrated. This effort was assisted by two factors.

One was keeping secret the Official Record of the Court of Inquiry of 1879 until 1951. The inquiry was requested by Major Marcus Reno to clear his name for conduct he had been accused of during the battle. It was not until retired Col. William A. Graham wrote The Custer Myth: A Source Book of Custeriana (1953) that a book came close to telling the actual details of that bloody day on the Greasy Grass.

The second factor was President Theodore Roosevelt's persuading Edward Curtis in 1908 to leave an account of the three Crow scouts he had interviewed out of his photo-rich, 20-volume The North American Indian. The scouts' version conflicted greatly with the image that Libby Custer had created over three decades with her books, lectures and interviews. 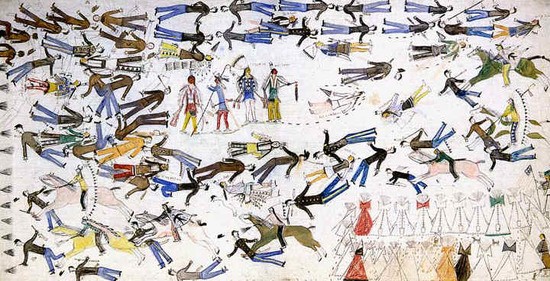 This depiction of the Battle of the Greasy Grass (or Battle of the Little Big Horn) was done by Kicking Bear, aka Matȟó Wanáȟtaka, an Ogala Lakota who was a first cousin of Crazy Horse (Tȟašúŋke Witkó). At the request of Frederic Remington in 1898, he painted the battle as he remembered it.

Custer was a favorite hero of Roosevelt—having said of him that he was “a shining light to all the youth of America,” The president informed Curtis that Americans would not take kindly to having their "memory" of the "Last Stand" besmirched by a trio of Indians, who, of course, were untrustworthy just by being Indian even though they had been trustworthy enough to guide U.S. Army troops on numerous occasions. Curtis dutifully left out that part of the story. Indeed, despite ample opportunity, the Indian side did not fully emerge into the view of the general public until the 1970s. That came about in part because the murderous policies that led to the battle and hundreds of others throughout American history began then to be examined outside the scholarly circles that had for 40 years challenged Libby Custer’s version.

Graham's now 66-year-old book was the first popular work to dismember the myth, as historians and other writers have done in microscopic detail since. Yet, even today, in spite of the scholarly delving into the battle, archeological studies of the ground where the fight took place and the amateur and professional exploration of every scrap of minutiae, every bullet casing, every written or recorded word, elements of what happened at the Little Big Horn remain in dispute. Moreover, some Americans continue to revere Custer as a major hero. For instance, Congress voted in 1991 to rename Custer Battlefield National Monument the Little Big Horn Battlefield National Monument. In the year before the change, the National Park Service received a steady flow of mail filled with racist slurs and other hate speech against the name-change, these missives bolstered by a twisted patriotism and labeling of the move as everything from a travesty to treason. White supremacy has not vanished.

As Graham wrote in reply to his publisher's pressure to ditch the word "myth" from the title:

Just what is a Myth? Ever since I began the study of history, many long years ago, I have been making the acquaintance of myths in one form or another. The exploits of the ancient gods of Greece and Rome come to one's mind instantly when one speaks of myths; but each of them, very probably, was founded in greater or less degree upon the accomplishments of some man, whose identity, once known, was lost in the maze of traditions, fictions and inventions that ascribed to him the attributes of a superman; and as the centuries passed, endowed him with the character of a supernatural person.

We have ourselves created myths in the course of our own short history, which spans less than two hundred years. Washington was in fact a very human person, as contemporary records prove; but the Washington the average American knows is not the real Washington. As "Father of his Country"; the all-wise leader, the military hero, the champion of freedom and foe of tyranny, his human qualities have all but disappeared. He has become a Myth.

So also with Lincoln, martyred savior of his country; about whom and around whom has been built so fantastic a structure of fictitious tales and absurd stores, that the real Lincoln has been obscured from view; and so in our own day with Franklin D. Roosevelt, who to millions of Americans was a selfless, immaculate latter-day Messiah, who gave his life on the altar of self sacrifice. Both these men were human beings—very human; but the Lincoln and the Roosevelt known to the average American are Myths.

And so with Custer, and so with nearly everyone involved in the Custer story. It began in controversy and dispute; but because a devoted wife so skilfully and so forcefully painted her hero as a plumed knight in shining armor—a "chevalier sans peur and sans reproche," that all who stood in the way of her appraisal were made to appear as cowards or scoundrels; and because her hero went out in a blaze of glory that became the setting for propaganda which caught and held, and still holds, the imagination of the American people, what began in controversy and dispute has ended in Myth; a myth built, like other myths, upon actual deeds and events, magnified, distorted and disproportioned by fiction, invention, imagination and speculation. The Custer known to the average American is a Myth; and so is Reno; and so also in Benteen.

The Little Big Horn battle was neither the greatest nor most important fight in the Indian Wars that began in North America in 1540 when Francisco Vasquez de Coronado attacked the Tiwa in what is present-day New Mexico and ended in Bear Valley, Arizona, in 1918 in a clash between the African American 10th Cavalry "Buffalo Soldiers" and a band of Yaqui.

But the battle practically every American older than 10 can name has come down to us as the mythical "Custer's Last Stand" and has in a multitude of ways shaped the American psyche regarding the collision between Europeans and Natives. Although the myth has been under attack for decades, both by scholars and Indians alike, it refuses to yield completely.