labor Rats Have Speech Rights, Too: Unions, Protests and Balloons

Last month, the National Labor Relations Board sought an unprecedented injunction against Laborers Local 79 in Staten Island to stop them from inflating a rat balloon. Unions must fight back. 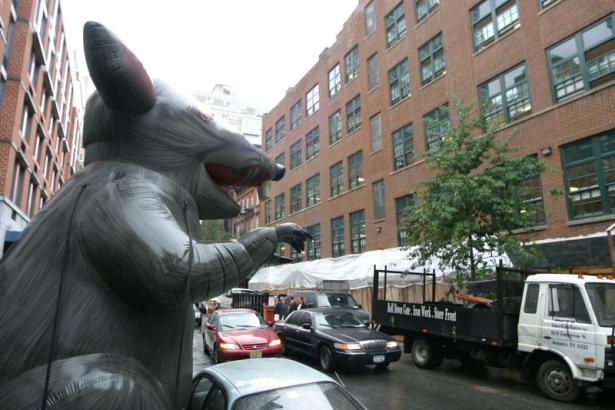 Outside a strip mall on Staten Island, a giant balloon rat lies deflated. I can’t imagine a less auspicious scene for the free-speech fight of the century. But it’s here the Trump administration has chosen to argue that free speech is for corporations — and not for workers. And it’s here that unions have an opportunity to reverse decades of anti-union legal dogma.

Last month, the National Labor Relations Board sought an unprecedented injunction against Laborers Local 79 in Staten Island to stop them from inflating a rat balloon. Previously, agency staffers leaked word that Peter Robb, Trump’s NLRB general counsel, “hates” the rat and was determined to exterminate it.

The NLRB is a federal agency tasked by statute to protect the rights of workers. But under Republican administrations, it does the opposite.

Now, by taking aim at the inflatable rodent, the NLRB invites a First Amendment challenge. Conservative jurists have spent centuries trying to keep unions as far from free speech rights as possible — unless it can be used as a weapon against unions. In last year’s Janus vs. AFSCME case, the conservative majority upended a 40-year-old precedent by inventing a free-speech right for public sector workers to refuse to pay union fees.

If Scabby the Rat winds up before the Supreme Court because unions claim that popping their balloon is a violation of their First Amendment rights (which it clearly is), the justices will be faced with squaring Janus with free speech in favor of forming a union.

Some history. Unions have long been subject to speech restrictions that would never be applied to a corporation. One reason is that our nation’s main labor law, the National Labor Relations Act, is constitutionally rooted in Congress’ authority to regulate interstate commerce and not in workers’ constitutional rights. Another reason is the anti-union Taft-Hartley Act, which outlawed solidarity.

Today, we think of the act’s “right to work” provisions as its biggest attack on labor. But the ban on strikes and boycotts against companies that do business with an employer in a labor dispute — on pain of multi-million dollar fines — has actually been the greater sap on union power and organizing prowess.

Essentially, Trump’s NLRB is using the act to argue in federal court that cartoonish vermin are a “signal” to engage in “illegal” boycotts, and inherently coercive. They’re leaning hard on outdated stereotypes about union thugs and broken kneecaps.

Even on Staten Island, which has one of the highest unionization rates in the country, no one is going on strike or refusing to shop at ShopRite because of a balloon. The rat doesn’t coerce; it merely makes a mockery out of a union-busting boss.

Before he joined the NLRB, Robb was a construction-industry lawyer. He’s probably spent countless billable hours listening to thin-skinned real estate developers like Donald Trump complain about rat balloons outside their windows.

The Southern District court, often a problem for Trump, rejected the NLRB’s request for a preliminary injunction on Monday. But the case will move forward. A government agency is making a value judgment about the form and content of unions’ speech that has nothing to do with coercion or its impact on commerce. The AFL-CIO must wage this free speech fight.

It’s an opportunity to challenge the entire premise of a legal regime that is directly responsible for the decimation of the labor movement.

Corporations have every legal tool at their disposal to resist workers’

Unionization efforts and the economic power to subcontract and reclassify the last remaining union jobs. Taft-Hartley denies workers the right to even ask fellow workers across corporate lines to leverage their own economic power to help them gain or maintain their labor rights. When it passed in 1947, one in three workers belonged to a union. Today it’s less than one in 10, even though polls show that at least half of all workers want to join a union.

Workers either have free speech rights and equal protection under the law, or the courts are where democracy goes to die.