Why Do Billionaires Present Themselves as America's Great New Hope?

From Ross Perot to Tom Steyer, rich megalomaniacs run for president by preying on voters’ disillusionment 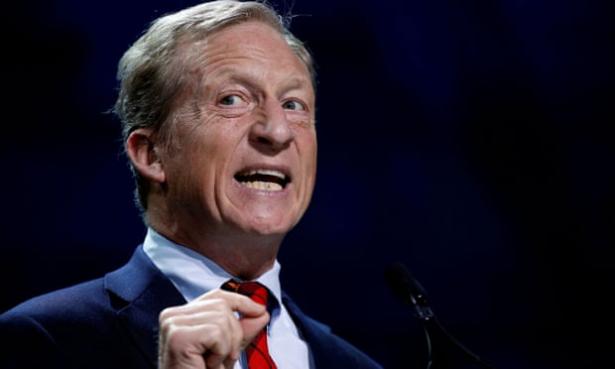 Steyer has been the embodiment of the anti-democratic tendencies in the Democratic party.’, Stephen Lam/Reuters

The past week saw both the passing of Ross Perot and the entry of Tom Steyer into the presidential race. It’s fitting that the two events should coincide – as one billionaire presidential candidate leaves us, another steps up to take his place. But while “rich guy who tells it like it is” candidates are not necessarily doomed to electoral oblivion – one of them sits in the White House today – they represent everything dysfunctional about US democracy.

Ross Perot was the original “outsider billionaire” candidate, gaining nearly 20% of the vote in the 1992 presidential election. It was not always clear what Perot stood for or what his policy plans were, though he was against Nafta and for balancing the budget. The Washington Post ran the headline “In Search of a Perot Platform”, and Perot himself would say cryptic things like “you could take any number of good plans that are around, implement them and have a gigantic improvement over the way things are.” Voters responded well to Perot. At one point, a poll showed him well ahead of both George HW Bush and Bill Clinton, and if it wasn’t for Perot’s bizarre temporary withdrawal from the race, he might have been a serious contender. Deficit-obsessed and mockable as he was, Perot had clearly tapped into something in the American electorate.

But after Perot’s failure, it seemed as if his candidacy had been a quirky aberration in US politics. It was two more decades before we saw another “outsider billionaire” trying to gatecrash the party system, this time succeeding. Donald Trump in many ways made a similar pitch: his wealth made him independent and not beholden to establishment interests, he would shake things up in Washington. As Matt Taibbi observed, Trump “used the same tactics, if not exactly the same politics” as Perot to make it to the White House.

Now we have hedge fund billionaire turned progressive political activist Tom Steyer, who also refers to himself as an “outsider” candidate. This is laughable. Steyer is as pure a product of the American ruling class as you can be. His father was an attorney at the prestigious Sullivan and Cromwell firm. Steyer himself attended Phillips Exter and Yale before joining Morgan Stanley and Goldman Sachs, where he was a protege of Robert Rubin. After making a fortune as a hedge fund manager, Steyer became one of the biggest donors in Democratic politics, financing campaigns and ballot initiatives around the country.

In fact, Steyer has been the embodiment of the anti-democratic tendencies in the Democratic party, which has gone from being the “party of the people” to the “party of Wall Street”. Steyer’s brother agreed that the two of them could be the “Koch brothers of the left”, because of the sheer amount of money that Steyer has spent trying to further his agenda. The fact that there can be a Democratic party equivalent of the Koch brothers shows the problem. Some of Tom Steyer’s causes have been noble – he strongly campaigned against the Keystone XL pipeline for instance, even personally lobbying Barack Obama and enlisting other big donors to do the same. But having big donors personally push causes is exactly what democratic politics shouldn’t be.

In a time of massive inequalities, though, where people feel disillusioned and powerless, billionaires can present themselves as the only ones with the resources and independence to get things done. Howard Schultz and Michael Bloomberg have both considered running for president and presenting themselves as alternatives to mainstream Democratic and Republican politics. They don’t have much more than platitudes to offer the public – when pressed on his agenda, Howard Schultz generally just mumbles something about partisanship. But they’re not wrong in thinking that people are hungry for an alternative.

The problem is, billionaires are generally pretty bad people, and certainly can’t be trusted to reliably champion the interests of the working class. Steyer, despite his public embrace of environmentalist and progressive causes, was heavily invested in private prisons and even fossil fuel companies. In 2014, the New York Times reported that “Mr Steyer’s fund, Farallon Capital Management, has pumped hundreds of millions of dollars into companies that operate coalmines and coal-fired power plants from Indonesia to China.” For years, his company also “invested heavily in the Corrections Corporation of America, the nation’s largest private prison firm”. Steyer’s investments were so controversial that at one point, Yale students protested the way Steyer was using their university’s endowment.

This is so often the way with these “good billionaires”. Warren Buffett, portrayed as kind and grandfatherly, was unapologetic when it was exposed that a company he owned was giving predatory loans to mobile home owners. Michael Bloomberg not only has a record of crude sexism, but his solution to the New York City homelessness crisis was to buy the homeless one-way tickets out of town. Bloomberg was clear on whose interests he served, saying “If we could get every billionaire around the world to move here it would be a godsend.” The 60,000 homeless people his administration left behind might disagree. Billionaire candidates often run promising to fix the very problems that their own existence created in the first place.

Billionaires succeed in getting attention because they have money, and while money isn’t itself speech, it can certainly buy a whole lot of it. But billionaires can also get votes, when people are despondent and tempted by someone who promises to solve their problems. This isn’t a healthy political system, though. It’s a sort of elected oligarchy where the only meaningful choice is which filthy rich person we want to rule over us. True democracy requires mass participation. We can’t just wait for a benevolent billionaire, because their candidacies are always about themselves rather than us.