Megan Rapinoe’s ‘Egotism’ is the Perfect Antidote to Donald Trump

A man with little talent squats in the White House, so it’s like balm to see a female sports star with real ability who’s unafraid to brag about it 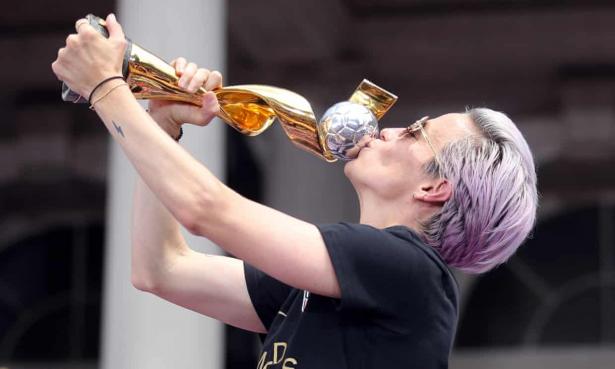 This week it has been gratifying to watch Americans – specifically, American men – grapple on social media with a concept long cherished by the British as a thing we love to hate. If our characters are organised as much around that which we despise as revere, it is safe to say that the ancient British revulsion for Being Up Oneself is a central force in national life that, until this week, many Americans claimed to find mystifying. And then along came Megan Rapinoe.

Traditionally in the United States, being up oneself has been a default attitude practically enshrined in the constitution. As an American, you are obliged to at least pay lip service to the idea that anything is possible, and all that stands between you and your dreams is your own winning hustle. Self-deprecation, that sly old song of Europe, is neither appreciated nor understood. There is no integrity, in the US, in hiding one’s light.

At least that is the official line. The truth of the matter, of course, is that as with everything else in this life, who gets to be up themselves and still come out smelling of roses – the differing reputations of, say, Barry Manilow and Barbra Streisand, two people with what might be described as equally healthy egos springs to mind – is very much up for debate.

Which brings us to Rapinoe. The co-captain of the US women’s soccer team has, over the last few weeks of the World Cup, exploded into national life and ruffled a lot of feathers. Her victory pose, arms outstretched, chin up to the crowd, launched a thousand memes. Her comment to reporters that, in the event of her team winning, “I’m not going to the fucking White House,” triggered the knee-jerk epithet “un-American”. And then on Wednesday, as Rapinoe and her fellow US teammates rode their World Cup victory float through Manhattan, she kissed the trophy and uttered the words, “I deserve this”.

Well. While a man who has never, knowingly uttered a modest statement about his vanishingly small talents squats in the White House, Rapinoe’s victory utterance triggered howls of protest from Donald Trump’s supporters. “Obnoxious”; “rude”; “egotistical”. On it went. The you-go-girl end of American positive thinking was never, actually, intended to unleash the female ego in this way but rather to act as a piece of marketing designed to remind people – women in this case – that there are no structural or political disadvantages in the US, only personal liability.

Throughout all this, Rapinoe appeared entirely unconcerned. There was something amazing about her defiance. Feminism is not, we know, about women simply aping men’s bad behaviour, but there was a context for Rapinoe’s “rudeness”. It was a correction to every shuffling, downward-looking, unequal-pay-earning posture adopted by women through the ages. Certainly, a woman who is not only a lesbian but is openly so, unapologetically strutting about in the limelight, had an almost medicinal effect on a culture traumatised by the bigot in Washington. Not even Trump could get away with calling this woman a loser.

And she didn’t shirk the political implications. On CNN earlier this week, talking to news anchor Anderson Cooper, Rapinoe let Trump have it again. Addressing the president more soberly this time, she said that through his political message, “You’re excluding people that look like me.”

Brazenness plays out differently in women than in men, we know this, and Rapinoe’s self-assurance these past few weeks has felt like a balm. As more details of the financier Jeffrey Epstein’s alleged sex trafficking come out and rape allegations continue to dog the president, simply to see a woman standing on a field staring down a crowd with a “what’s your point?” look on her face has huge symbolic value.

Rapinoe’s detractors on Twitter called her attitude monstrous, a piece of egotism that took away from the team. For many women watching, however, her intent was clear. Rapinoe’s win and her subsequent attitude to winning was, in fact, purely one for the team. My God, it felt good.

• Emma Brockes is a Guardian columnist