Citing the response to the historic popular uprising in Sudan, the author warns some on the African American Left may have joined Euro-American political scientists in undervaluing the potential for political mobilization in sub-Saharan Africa. 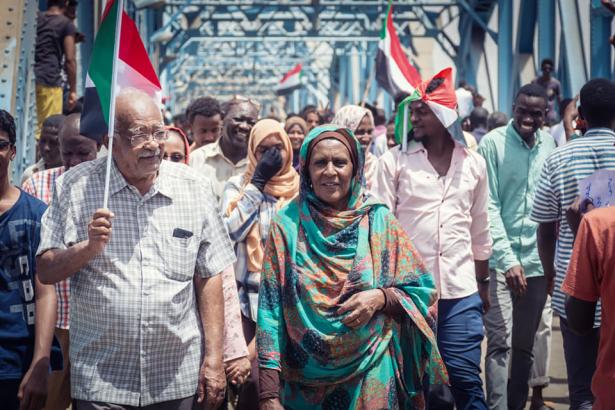 Organizers in Sudan coordinated the transportation of thousands of protestors from throughout the country to participate in the demonstrations in Khartoum and elsewhere., Moh Elrayieh Sighiroon's Facebook post

In the wake of former Sudanese President Omar Al-Bashir’s fall from power in April 2019, the Black Agenda Report (BAR)—one of the oldest and most respected Left black online publications (including a podcast) in the United States—published its first analysis of the uprisings that had been growing in Sudan since December 2018. The BAR published an article entitled “Saudi Arabia, Israel, US all Sought Bashir’s Ouster: So how Real was the Sudan Revolution?,” by a Chile-based journalist, Whitney Webb, who suggested that the uprising had merely been manufactured by Saudi Arabia, the US, and Israel. As a BAR listener and a Pan-Africanist, I was disappointed both by the fact that BAR took so long to offer analysis on the events in Sudan, and by the simplicity of the analysis itself.

The author pointed to Saudi Arabia and other Gulf state actors’ support for the Transitional Military Council (TMC) as evidence to back their claim that foreign actors have manufactured the revolution. In doing so, the author is conflating the formation and leadership of the TMC with the popular uprising. To be clear, protests continued even after Al-Bashir had stepped down and the TMC had been established by military leadership. It is by now evident that even with Al-Bashir gone, Saudi Arabia, Israel, and the US are interested in his policies remaining in place under new leadership. For example, Saudi Arabia is keen to maintain the presence of Sudanese troops in its war on Yemen.

Rather than pay attention to the months of organizing, or the root causes of popular unrest (most notably, adverse economic conditions), the author concludes that the Sudanese revolution began and ended with the arrest of Al-Bashir on April 11, 2019. By reducing everything to this event, the author bastardizes the term “revolution” that many of us associate with mass long-term organizing and protests. For months, organizers in Sudan coordinated the transportation of thousands of protestors from throughout the country to participate in marches and sit-ins both within the capital city of Khartoum as well as smaller cities. Protestors established neighborhood committees to maintain communication without the assistance of the internet. Attending a rally on June 30th in London in solidarity with the Sudanese revolution, I was speaking to a Sudanese friend who is active in the protests. When I mentioned the BAR article, she responded, “tell them to come to Khartoum, I’ll show them how real it is.”

The BAR has long been committed to offering critical analysis of global empire and the racist, anti-black, and colonial logics that undergird contemporary global politics. In this vein, it has raised important questions about the interests and motivations behind Al-Bashir’s indictment by the International Criminal Court. Yet it appears that BAR’s critique of the ICC on Sudan has rendered it incapable of listening to those with the most at stake in the future of Sudan. BAR’s single-minded focus on the dismantling of US and European empire has had an unintended blinding effect towards popular demand for change.

The April BAR article is representative of a paradigm that has rendered self-identified Black American Leftists unable to recognize the emergence of grassroots uprising on the African continent. The conventional position continues to hope for a revolutionary black consciousness on the horizon yet to come, or to lament the distance we now have from the material and ideological successes of the 1960s and 1970s. In other words, we have lost our sensitivity to revolutions that are actually already existing. The dismissal of such uprisings renders little practical difference between the Black American Left and the social and political scientists of Euro-American universities whose analyses following the so-called Arab Spring predicted that similar political mobilization was impossible or improbable in African countries south of the Sahara. In each case, the analysis is either over-determined by empire or by the repressive nature of authoritarian regimes, rendering the African masses unthinking and unimaginative subjects.

What is lost in such accounts is the opportunity for the Black American Left to learn and to bear witness to the strategies and processes that have enabled nationwide organizing in Sudan, home to the oldest communist party on continental Africa. As members of the Black American Left, the endurance of such an uprising on the continent should have garnered ardent attention. As marches and public protests in the US are often limited to highly curated events, negotiated with local police, we should pay attention to the organic and durable organizing that characterize the uprisings in Sudan. Our commitment to global liberation should open us up to how and when new revolutionary processes of demonstrating, organizing, and protesting emerge and inscribe themselves into the global political imagination. In the wake of last week’s negotiated agreement between the TMC and opposition leaders, it is all the more incumbent for those of us who identify as Pan-Africanists to be in dialogue with and learn from people on the ground who are strategizing about how to maintain the channels for continued resistance.