A general strike took place across the US territory on Monday morning, protesters chanting the now familiar cry of “Ricky resign!”, waving flags and banging drums. 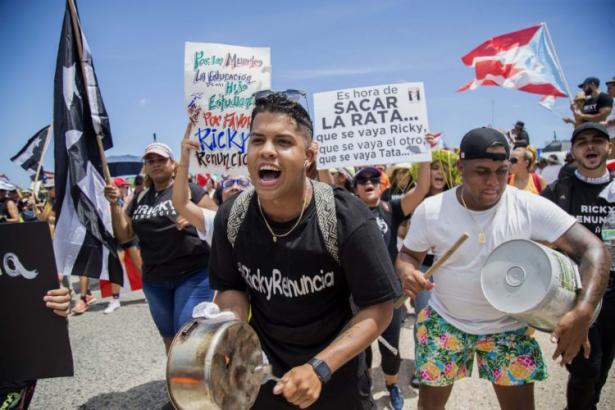 Police moved in at about 11pm to break up protesters still on the streets of San Juan’s old city following day-long demonstrations by hundreds of thousands of residents. It follows Governor Ricardo Rosselló’s attempt to cling on to power despite resigning as president of the ruling New Progressive party and announcing he will not run for re-election next year.

A general strike took place across the US territory on Monday morning, protesters chanting the now familiar cry of “Ricky resign!”, waving flags and banging drums. Demonstrations have gripped the island since hundreds of pages of leaked text messages between the governor and 11 members of his inner circle were published on 13 July.

The messages contain homophobic and sexist slurs against political rivals and cultural figures. They also contain a joke about dead bodies during Hurricane Maria, which devastated the island in September 2017.

Puerto Rico’s largest mall, Plaza de las Américas, closed before Monday’s demonstration along with many other businesses. Last week police used teargas and rubber bullets to disperse protesters at a huge rally outside the governor’s residence in the island’s capital, San Juan.

Carmen Portela, 40, was among those protesting on Monday. The founder of Local Guest, a Puerto Rico-based travel company, Portela said that Rosselló “has demonstrated that he’s not capable of governing”.

“I think it’s time to have a new Puerto Rico and that begins with a new government … This chat gave light to what we all already knew, that this is a very corrupt government.”

In the Oval Office on Monday, Donald Trump once again laid into Rosselló and the mayor of San Juan, Carmen Yulín Cruz, a vocal critic of the governor and the president.

“He’s a terrible governor. You have an even worse mayor of San Juan,” Trump said. “We did a great job in Puerto Rico. They don’t want to give us credit … I have many Puerto Rican friends.”

Trump has frequently inflated the amount of aid Washington has given to Puerto Rico following Maria. Although Puerto Ricans are American citizens, those living on the island cannot vote in presidential elections and have no voting member of Congress.

A number of senior Republicans and Democrats have called on Rosselló to resign but the White House has not formally called for him to go.

Protest organizers branded the planned Monday shutdown “660,510 + 1”, representative of the number of people who voted for Rosselló plus one, in order to reject the governor’s suggestion that he is not resigning due to his popular mandate.

In an interview on Fox News, Rosselló struggled to show evidence of support, finally citing a single local mayor when asked by interviewer Shep Smith for “just one name” of a prominent supporter.

As occurred last week, a number of Puerto Rico’s biggest recording artists appeared prominently at Monday’s demonstrations. Singers such as Ricky Martin, himself a subject of homophobic ridicule in the leaked messages, and rappers Resident, Bad Bunny and the singer iLe, have become unofficial figureheads in the leaderless movement to oust Rosselló.

“Governor Ricardo Rosselló has made further mockery of the Puerto Rican people by refusing to leave office,” said a statement from Power 4 Puerto Rico, a Puerto Rican diaspora group created after Maria.

“As worldwide demonstrations calling for the governor to step down continue, the Legislature of Puerto Rico must now commence an impeachment process based on the ample evidence corroborated by many jurists of Rosselló breaking the law.”

Rosselló and the 11 others implicated in the message scandal have been issued summonses by the island’s justice department. While a number of those in the chat group, including the former secretary of state Luís Rivera Marín, have resigned over the affair, Rosselló has maintained the messages contained nothing illegal.

“I have made mistakes and I have apologized for them,” he said during his address on Facebook Live on Sunday evening. “I am a good man who loves his island and everyone. Since I started my term to lead Puerto Rico’s destiny, in front of the most devastating economic and fiscal panorama ever.”

The administration has been plagued by corruption scandals.

Shortly before the text message scandal erupted, the FBI arrested a number of administration officials and contractors – including Rosselló’s former education secretary – over allegations of corruption and misappropriation of $15.5m (£12.5m) in federal funds apportioned to Puerto Rico after Maria.

Many protesters have carried placards with the number 4,645, the estimated death toll in the wake of Maria, according to a Harvard research paper. Rosselló’s administration had initially recorded Maria’s death toll at 64, before eventually revising the number to 2,975.

The island continues to reel from the effects of the devastating hurricane amid a faltering recovery effort led by the Trump administration.

Myrna Figueroa Lopez, 37, said she had travelled from her home in Washington state to be among the Puerto Rican diaspora participating in the protests. She criticized how Rosselló’s government handled recovery funds the wake of Hurricane Maria.

“We, who live in mainland USA, made every effort to mobilize aid to Puerto Rico after Hurricane Maria not only to help our families but everyone here,” she said. “But, that aid was left to rot, stolen, or not distributed properly by this government.”

“We feel robbed, not only us but also non-Puerto Ricans who helped, donated, and mobilized the airlines to deliver food, water and all sorts of aid. This is disrespectful to our families.”