About one-half of all higher education teachers and professors are contingent, or adjunct, laborers. This book portrays this crisis, and even though it is a flawed treatment, reviewer Roth finds some things of interest in this study. 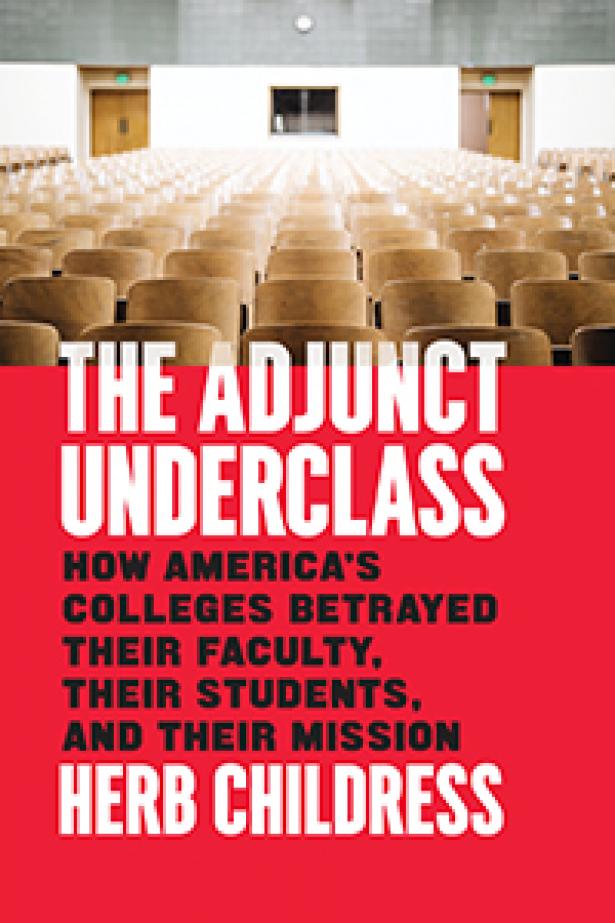 The Adjunct Underclass
How America’s Colleges Betrayed Their Faculty, Their Students, and Their Mission
Herb Childress
University of Chicago Press
ISBN: 9780226496665

Herb Childress’ widely reviewed The Adjunct Underclass: How America’s Colleges Betrayed Their Faculty, Their Students, and Their Mission paints in stark terms the bleak conditions faced by part-time faculty. But there’s also a deeper, disturbing side to Childress’ portrayal, one subsumed within a romanticization of a past that never truly existed except for a small minority within the educational community, and even there, Childress’ depiction is more imagined than actual.

The most poignant passages in The Adjunct Underclass are the testimonials and interview excerpts that are clustered in the opening chapters, where adjuncts reveal in their own words the dead-end and dispiriting conditions in which they are trapped: the low, piecemeal (per course) wages, lack of health benefits, no provision for paid time-off, long and hectic commutes between assignments at different institutions, absence of job security, lack of institutional recognition and appreciation and employment contracts that are renewed on a semester by semester basis and don’t allow for either a stable income or dependable plans for the future. In institutions predicated on academic freedom, adjuncts must be cautious. They don’t control what they teach and often must use mandated texts and uniform exams. According to the US Department of Education, this harsh regime now applies to nearly half the collegiate professoriate in the United States. By letting the adjuncts speak for themselves, these passages represent, to use George Orwell’s paraphrase of Marx, ‘the sigh of the soul in a soulless world’.

The ideal institutions for Childress are ‘the elite liberal arts colleges [that] share four common field markings: a full focus on undergraduate learning, a substantial endowment that provides added income, a competitive admissions process, and full-timers making up 80 percent or more of their faculty’ (43). The best education, in his view, is conducted face-to-face, whereas ‘the loss of unique experience’ is for him what the critique of education is all about (77). Except in a few dozen of these types of institutions, however, the kind of education he espouses – close mentoring relationships between individual faculty members and students – hasn’t existed for a century. Mentoring relationships shifted from the undergraduate to the graduate level during the late 1800s and early 1900s. At larger public institutions, mentoring has always been the exception rather than the norm. Even when students reside on campus, they tend to mentor one another, leaving to the faculty only that which is mandated or which is deemed necessary to ensure top grades. Childress’ romantic memories are just that, a longing for a type of faculty-student relationship that barely ever existed.

Childress, to his credit, admits to all this: his own romanticization of the past, the past’s problematic elitist orientation and the exclusion of women and minorities, upon which white men’s excellence rested. Nonetheless, the current situation for him ‘is the outcome of a vast shift in our beliefs about who should go to college, and what kinds of experiences they should expect to find there. It is the outcome of millions of well-intentioned decisions that have led to tragically unintended consequences for students and teachers alike’, as if Adam Smith had woken from a bad dream (17). The practices of the past ‘were unique and idiosyncratic, weren’t developed to serve a more diverse student community, and weren’t equipped to keep pace with the regulatory details of state and federal oversight’, some of the societal-wide changes to which Childress draws attention (96).

This interlocking of factors represents some of the strongest and most convincing passages in Childress’ commentary: ‘specialization arose to meet the greater complexity of student needs and a broader array of opportunities, and specialization means specialized employees – lots and lots of specialized employees’ (96), one consequence of which is that ‘faculty will never again be a primarily full-time, primarily tenure-track institutional or cultural commitment’ (135). Childress refers to a ‘systemic crisis’ (141), even as he admits that colleges ‘are richer, stronger, more inclusive, and more effective than those of our forebears’ (144).

Information in an addendum further explains the transformation of higher education into its current form. An overproduction of graduate degrees, research funding and endowments which shift institutions away from their traditional focus of teaching and mentoring, the embrace of a diverse student body that requires new and deeper levels of support services, long-term enrollment shifts and the need for flexible budgeting, declining student interest in key liberal arts areas and rapid growth in pre-professional and technical areas that entail extensive investment in technology – all this has as its financial underbelly a flexible and inexpensive professoriate. While the number of students and full-time faculty has more than doubled since 1970, part-time faculty have increased at greater than three times this pace. According to Childress’ calculations, fifty-five thousand doctoral degrees were awarded in 2015, but only twenty thousand full-time faculty positions were advertised (53).

Most revealing is Childress’ description of society’s victims. Foremost are the full-time faculty who have been replaced by part-timers and deprived of their mentoring functions, a result of the expansionist tendencies of the past many decades. Instead, there are more students and more adjuncts, and as a result, ‘the students with the least cultural capital and the least prior educational success are provided with the teachers who are lowest paid, least secure, and least informed about or connected to campus initiatives designed to help struggling students’ (36).

Without data or testimony, however, Childress repeats common misconceptions about part-time faculty. He claims that because of their oppressed status, adjuncts have neither the time nor the inclination to mentor students properly. This manner of posing the issue, however, misconstrues the needs of students. Most of them commute; by-and-large, it is only the elite of students, that is, students from solidly middle class or wealthier backgrounds, who attend residential colleges. Mentoring is not of foremost importance for commuting students. Faculty office hours are a legacy of the past, a time before email and messaging when professors waited patiently for the off-chance a student might stop by.

Nor is the teaching process compromised by adjuncts. ‘Teacher burn-out’ remains an occupational hazard for full-time faculty who have taught for many years already, with planned sabbaticals one means to deal with this issue. By reputation, adjuncts are quite conscientious, technologically savvy, use a wide variety of teaching methods as a means to interest students, directly attempt to close the gap between what they teach and what the students learn and are more current in cutting edge knowledge than some of the full-time faculty who no longer feel compelled to keep up with new developments in their respective fields. Childress’ claims that adjuncts are ‘faculty with less specialization and expertise’ is patently false (78).

This tendency to misrepresent reality as a means to reinforce his indictment of higher education is evident throughout the book, an expression of his own cynicism and ‘burn-out’ despite his acknowledged successful career within higher education as a professor, administrator and consultant. At root is an embrace of the liberal arts as a sanctified realm: ‘most career-based majors aren’t scholarly endeavors anyway; they’re instrumental, functional, and have no need of critical intellectual apparatus’ (84). His claim that a career-based discipline ‘makes contingency almost inevitable’ (86) isn’t accurate. Many pre-professional fields have lower rates of adjunct-utilization than is true for core liberal arts areas because of the strict ratios mandated by discipline-based accrediting associations. Examples include the fields of business, social work, nursing and public administration.

Childress’ assertion that community colleges ‘are almost fully in the transfer business, preparing their students to take those first two years and bolt them onto the front end of someone else’s degree program’ is also misleading (77). While a majority of community college students intend when they first enroll to transfer to a four-year institution, only a minority actually do so. Most either enroll in an occupational training program or never finish any program whatsoever.

Gratuitous insults follow in rapid order, whether it’s ‘the nervous freshman who arrives at Whussupwich U’ or his claim that ‘STEM [the emphasis on science, technology, engineering and mathematics] is just a lazy way of saying we want people to invent more cool, inexpensive gadgets for us to buy’ (82). Rather than explaining the economic and institutional warping of scientific methodology, as for instance might be found in the sciences or in theoretical endeavors, Childress claims that ‘scholars have made their entire careers out of finding problems within what is perceived to be settled knowledge. They carve out that one tiny bubble at the edge of what they know, and they focus all of their ample energies and intelligence on precisely defining, or redefining, or complicating that small issue’ (108). It is doubtful that many academics would recognize themselves in this sort of a description, or the fact that, per Childress, ‘faculty earn their reputations as arrogant nitpickers’ (108).

These sorts of statements might be described as wit – and there are many more scattered throughout the book, but Childress’ statements often contain a contemptuous undertone, as when he claims that ‘student advising is nothing like its earlier iterations; it now proliferates with international student support, English as a Second Language staff, learning disabilities specialists, and programs for student with eating disorders and body dysmorphia’ (94). His assertion that ‘it’s the working-class and middle-class schools that have had the greatest growth in academic and student services, even as their overall funding is deeply uncertain’ (95) contradicts data he provides (87), which shows that staffing at public institutions, where the majority of these students attend, has either stagnated or declined.

If it were up to him, full-time faculty would reassert their power over collegiate institutions by eliminating adjuncts and once again providing student services (which he confuses with mentoring) in areas such as counseling, academic and non-academic advising, service learning, study abroad, undergraduate research, admissions, recreation and intramural sports. Administrators would rotate from among the faculty, thus eliminating the need for outside searches and outside expertise. Hiring would also be done by the faculty at large, not by disciplinary-focused departments. Research and publishing are not Childress’ priorities; the mentoring of students is. What Childress has in mind throughout The Adjunct Underclass is the small liberal arts college, in which faculty are expected to devote substantial amounts of time to counseling and guiding students in both academic and extra-curricular activities, although in truth his image is that of the elite prep school rather than a liberal arts college.

Childress dismisses adjunct unions as unnecessary and better pay for adjuncts as a measure that won’t help cure higher education of its ills. He is not intent on helping adjuncts; he prefers to rid the educational world of their existence, since ‘we will only eliminate contingency [e.g. adjuncts] through changing our definitions and our values. We will only eliminate it through cultivating respect’ (154). It is a particular type of conservatism that uses the powerless to advance an agenda from which they will not benefit. His vision places the liberal arts at the center of human civilization, a type of privileging found as far back as the ancient Greeks. Childress thinks of the future in terms of the past.

Gary Roth is the author of The Educated Underclass: Students and the Promise of Social Mobility (Pluto Press, 2019) and Marxism in a Lost Century: A Biography of Paul Mattick (Brill/Haymarket Books, 2015). He is also the Book Review Editor at H-Socialisms.