NBC Debate Questions Show Media Is Out of Touch With Voters

Savannah Guthrie Debate Question: “What do you say to those who worry this kind of significant change could be risky to the economy?” 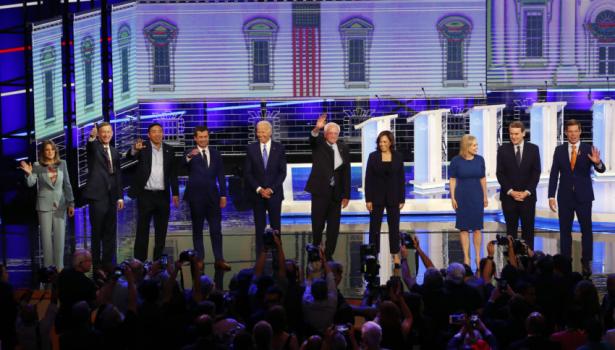 Democratic presidential candidates enter the stage for the second night of the Democratic primary debate hosted by NBC News in Miami., (Wilfredo Lee/AP

With Round 2 of the Democratic primary debates beginning today, it’s worth looking back at what was asked in the first round to see whether the issues of most concern to Democratic voters are being addressed.

The initial debates, hosted by NBC, focused heavily on the economy (19% of questions), healthcare (18%) and immigration (18%) — central issues to many voters, to be sure. But other issues that Democrats want to hear about got short shrift. Climate change, which multiple polls put second only to healthcare as a top issue for Democratic voters, got only 10 questions (8%), while core issues around race and women’s rights got eight (6%) and five (4%), respectively. Two questions were asked about LGBTQ concerns.

The first question on the first night (6/26/19) gave a pretty good sense of the network’s approach to the debates. Turning to Elizabeth Warren, NBC‘s Savannah Guthrie asked:

You have many plans — free college, free childcare, government healthcare, cancellation of student debt, new taxes, new regulations, the breakup of major corporations. But this comes at a time when 71 percent of Americans say the economy is doing well, including 60 percent of Democrats. What do you say to those who worry this kind of significant change could be risky to the economy?

Who, exactly, is worrying about these plans being risky? Guthrie’s sleight-of-hand suggests it’s Democratic voters, when in fact they overwhelmingly support pretty much all of the plans she listed. (Warren’s “new taxes” are highly popular wealth and corporate taxes.) And, in fact, even the general population tends to support such policies. But the fiscally conservative, risk-averse, largely-happy-with-the-status-quo voter—which, by the way, probably fits the profile of most of the corporate media questioners—would haunt much of the debate.

A single question was asked about education, but “free college” was mentioned among other social welfare policies in four other questions, all of which were framed around cost, or supposed pragmatism, rather than benefits—e.g., asking whether such policies give “a false sense of what’s actually achievable,” or whether “Democrats have a responsibility to explain how they will pay for every proposal they make along those lines” (6/27/19).

Climate, too, got the “how will you pay for this” treatment in two of its 10 questions, in addition to a question asking Beto O’Rourke to respond to a hypothetical voter who—in response to “big changes,” like “switching to renewable energy [and] pushing to replace gas-powered cars in favor of electric ones”—”feels as if government’s telling them how to live and ordering them how to live.” Meanwhile, none of the environment-related questions raised the issue of how much not addressing the climate crisis will cost, or foregrounded the fears of voters concerned about insufficient government action on climate. The Green New Deal was not mentioned at all.

Questions about organized labor were also notably absent, as were the issues of campaign finance and Citizens United—a noteworthy omission, when several of the candidates have made a point of swearing off money from various corporate interests or Super PAC money.

The foreign policy questions, 11% of the total, were notably bellicose, with Lester Holt asking three different candidates, “How would you stand up to China?” and Chuck Todd asking everyone in the first debate to give a one-word answer for “greatest political threat.”

The threat the US poses to the world might have been a relevant issue, given that the US is involved in ongoing drone wars in at least six countries, and at least 5,000 civilians in Iraq and Syria have been killed in drone attacks and other US and US-allied airstrikes since the beginning of Trump’s presidency. But the only drone question asked in the first debates was about worries that drones will take over domestic jobs.

Compared to the questioning in the early Democratic presidential primaries for the 2016 election, there was a dramatically greater focus on healthcare (from 2% to 18%) and immigration (from 6% to 18%). Questions about foreign policy dropped significantly, from 25% to 11%. Non-policy questions, which often eat up an outsize portion of debate time with a focus on non-substantive issues like electability, personal questions or general questions about other candidates, also dropped significantly, from 21% to 2%. New this year were a series of questions about governance: ten questions about bipartisanship, gridlock, court-nominee obstruction and damage to our political institutions.

Methodology: FAIR counted all questions except for requests for opening or closing statements, interjections, clarifications and follow-ups to the same candidate on the same subject. Some questions were classified as belonging to more than one category, so total percentages exceed 100%.