The APA said that people with mental illness are being stigmatized. 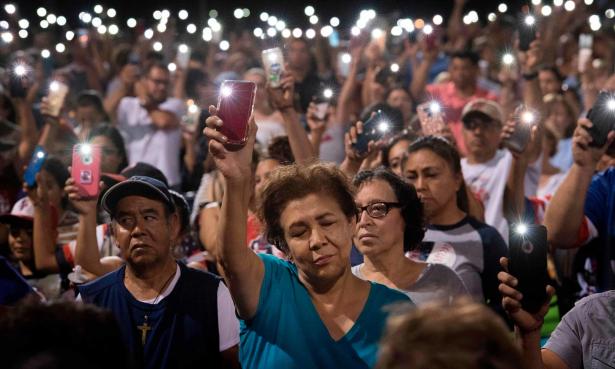 The country’s largest organization of psychiatrists on Monday pushed back against comments from politicians linking the most recent spate of mass shootings to mental illness.

In a statement, the American Psychiatric Association (APA) said gun violence is a public health crisis, and noted that “the overwhelming majority of people with mental illness are not violent and far more likely to be victims of violent crime than perpetrators of violence.”

The APA said that people with mental illness are being stigmatized.

"Rhetoric that argues otherwise will further stigmatize and interfere with people accessing needed treatment. Individuals can also be emboldened to act violently by the public discourse and divisive rhetoric,” the organization said.

In televised comments from the White House on Monday, President Trumpcalled for more focus on mental health screenings, after mass shootings in Dayton, Ohio, and El Paso, Texas, over the weekend resulted in the deaths of more than 30 people.

Trump in his speech called mass shooters “mentally ill monsters” and even floated the idea of involuntary confinement for people with mental illness.

“We must reform our mental health laws to better identify mentally disturbed individuals who may commit acts of violence,” Trump said, “and make sure those people, not only get treatment, but when necessary, involuntary confinement.”

“Mental illness and hatred pull the trigger. Not the gun,” Trump said.

The El Paso shooting is being investigated as a potential hate crime, as the suspected gunman allegedly posted an online manifesto against immigrants before carrying out the attack.

On Sunday, Trump also blamed mental illness for the actions of the two separate gunmen.

“This is also a mental illness problem,” Trump told reporters. “These are people that are very, very seriously mentally ill.”

His comments echoed those from other top Republicans, including Texas Gov. Greg Abbott.

“Mental health is a large contributor to any type of violence or shooting violence,” Abbott said in remarks after the El Paso shooting on Saturday.

Sen. Chris Murphy (D-Conn.), who has long advocated against gun violence, said there’s no evidence that mental illness is to blame for mass shootings.

“4 out of 5 mass shooters have no mental illness diagnosis, and half showed no signs on a prior, undiagnosed illness,” Murphy tweeted. “Framing this as just a mental illness problem is a gun industry trope. Period. Stop.”

“Routinely blaming mass shootings on mental illness is unfounded and stigmatizing. Research has shown that only a very small percentage of violent acts are committed by people who are diagnosed with, or in treatment for, mental illness,” Phillips Davis said.

“The rates of mental illness are roughly the same around the world, yet other countries are not experiencing these traumatic events as often as we face them. One critical factor is access to, and the lethality of, the weapons that are being used in these crimes. Adding racism, intolerance and bigotry to the mix is a recipe for disaster,” she added.