Greenhouse, a former labor reporter and foreign correspondent for the New York Times, builds a persuasive case that the inability of workers to engage in collective bargaining has markedly shifted power to corporations. 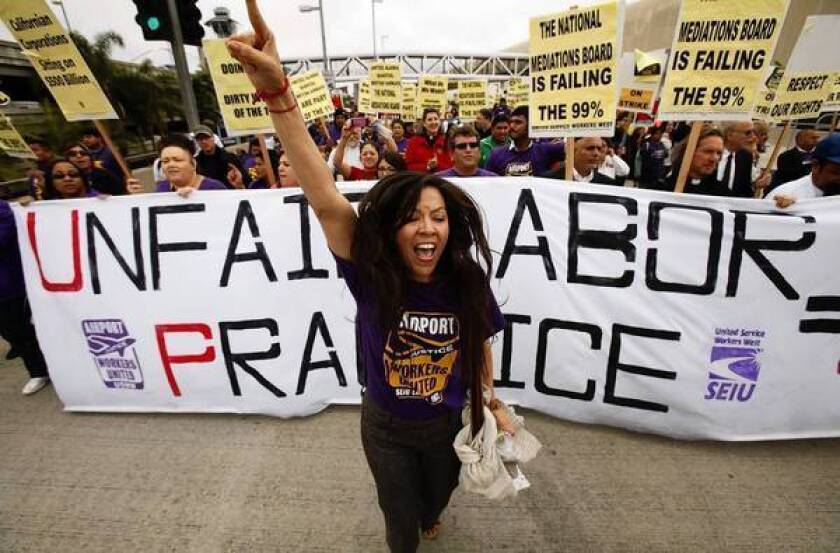 Los Angeles unions are among the most successful in the nation in gaining higher pay and benefits for low-wage workers over the past two decades.

In the early 1990s, Los Angeles faced a turning point. Many of the aerospace and manufacturing jobs that had boomed during and after World War II, feeding a large, prosperous middle class, had evaporated.

In the wake of the fiery 1992 riots, two labor organizers, children of farmworkers, launched a scrappy new group to battle poverty and inequality. Over the following decades, the Los Angeles Alliance for a New Economy (LAANE) would gather unions, community groups, environmentalists, immigrant advocates and clergy into one of the most powerful forces in the city.

In his sweeping new history, “Beaten Down, Worked Up: The Past, Present, and Future of American Labor,” Steven Greenhouse devotes a detailed chapter to LAANE, as “an extraordinary incubator of pro-worker ideas” and a model for what he calls “a new and different labor movement.”

The group championed the nation’s broadest living-wage law; invented the concept of “community benefits agreements,” forcing big developers to hire locally and build low-income housing; and, with political muscle, helped raise pay and benefits for some 120,000 workers from hotel maids to garbage haulers and construction laborers.

But even as labor grew stronger in Los Angeles, Greenhouse writes that unions across the country have been decimated by fierce pushback from corporate executives, by anti-labor Republican officials from the Reagan era to the Trump administration, and by lawsuits and legislative attacks funded by the billionaire Koch brothers and other right-wing magnates.

In the 1950s, more than a third of U.S. workers belonged to a union. Today membership is down to 10.5% of the workforce.

For corporations, it may be the best of times. Profits are soaring after massive tax cuts for businesses and wealthy stockholders. Labor, environmental and job safety regulations have been gutted.

For workers, it may be the worst of times. Unemployment is down but average hourly pay, adjusted for inflation, remains below what it was in 1973. Four in 10 adults lack enough savings to pay a $400 emergency expense, according to the Federal Reserve. And the U.S. remains the only industrial nation that fails to grant workers the right to paid sick days, vacation or maternity leave.

Greenhouse, a former labor reporter and foreign correspondent for the New York Times, builds a persuasive case that the inability of workers to engage in collective bargaining has markedly shifted power to corporations, fueling the nation’s exploding inequality.

The share of national income going to business profits has risen to its highest level since World War II, Greenhouse reports, while workers’ share — employee compensation including benefits — has sunk to its lowest level since the 1940s.

“Millions of Americans know little about what unions have achieved over American history,” he writes. “Labor unions, and their ability to create a powerful collective voice for workers, played a huge role in building the world’s largest, richest middle class.”

“Beaten Down, Worked Up” paints vivid portraits of labor champions, from the firebrands of the International Ladies Garment Workers Union in the early 20th century, to the African Americans who led the 1968 sanitation workers strike in Memphis where Martin Luther King Jr. was assassinated, to the multiethnic organizers — Latino, black, white — of Las Vegas’ Culinary Workers Union, which raised wages for 57,000 hotel and casino workers in recent decades.

At the same time, there are searing accounts of the struggles of workers with no union to defend them: the Kansas City Burger King and Pizza Hut worker who takes five buses between two jobs that pay so little his family is evicted from its unheated apartment; the Colorado nurse fired for taking two sick days after a fever of 103 from pneumonia; the Disney software engineers laid off with no severance unless they trained their replacements from India; the Uber driver whose income cratered after the tech giant slashed mileage compensation and hiked its commission from 10% to 25%.

Beginning in the 1970s, stiff competition from abroad battered U.S. industry from steel mills to automakers to electronics factories and garment manufacturers. Globalization spurred American companies to force labor concessions that weakened members’ attachment to their unions. And they moved operations overseas.

Decades of economic turmoil set the stage for Trump’s 2016 victory as he tapped into blue-collar resentment with ferocious trade-war and anti-immigrant rhetoric. Trump followed through with punishing tariffs on goods from China and other nations. But on basic labor issues, Greenhouse writes, the Trump administration “has repeatedly sided with business over workers. It has scrapped numerous job safety regulations … and rolled back a rule that extended overtime pay to millions more workers.” Trump appointees successfully pushed the Supreme Court to limit worker class-action suits and curb the clout of public employee unions.

If labor’s predicament seems dire, its future may lie in a new approach — organizing low-wage workers whether or not they can be unionized. LAANE’s success is one example. Greenhouse describes others: the Coalition of Immokalee Workers raised pay for 35,000 workers and fought sexual abuse in Florida’s tomato fields with a successful boycott of Taco Bell; the Fight for $15 movement, funded by the Service Employees International Union, mounted a global campaign to raise pay at McDonald’s, and then branched out to support minimum-wage hikes in cities and states across the country, benefiting some 22 million workers.

Those efforts may be having an impact. Public approval of unions has risen to 62%, the highest level since 2003. But the path forward for a diminished labor movement is far from clear. “In the balance,” Greenhouse argues, “is the future of our economy and our democracy.”