labor Why It’s Immigrants Who Pack Your Meat

What Trump has called an “invasion” was actually a corporate recruitment drive. 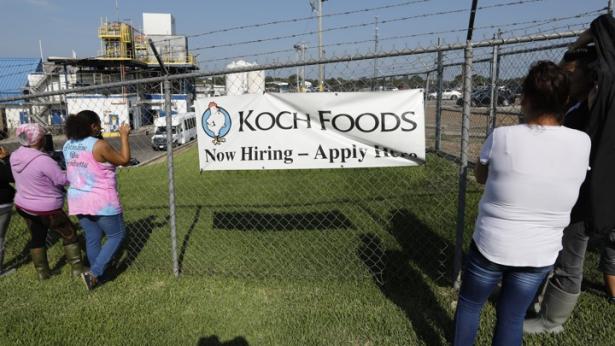 The immigration raid last week at seven poultry plants in rural Mississippi was a perfect symbol of the Trump administration’s racism, lies, hypocrisy, and contempt for the poor. It was also a case study in how an industry with a long history of defying the law has managed to shift the blame and punishment onto workers.

Planned for more than a year, the raid involved at least 600 agents from U.S. Immigration and Customs Enforcement, helicopters, and a staging area at a local National Guard base. The agents carried handguns, wore black body armor, and led 680 immigrant workers—almost all Latino, many of them women—to waiting buses with their hands zip-tied behind their backs. One worker, an American citizen, was shot with a Taser for resisting arrest. Children gathered outside the poultry plants crying as their parents were taken away and sent to private prisons; other kids sat in classrooms and at day-care centers, unaware that their families were being torn apart. It was the first week of school.

“The timing was unfortunate,” Kevin McAleenan, the acting head of the Department of Homeland Security, later acknowledged. Twenty-two people had been killed a few days earlier in El Paso, Texas, where a gunman had targeted Mexican customers at a Walmart out of a desire to halt “the Hispanic invasion of Texas.” President Donald Trump expressed no regret and applauded the Mississippi raid, arguing that it would deter undocumented immigrants from taking American jobs. “I just hope to keep it up,” he said.

Despite the fact that the poultry workers were merely arrested, not yet found guilty, Mike Morgan, the acting commissioner of U.S. Customs and Border Protection, dismissed concerns about an 11-year-old girl photographed sobbing outside one of the plants. “I understand the girl’s upset, and I get that, but her father committed a crime,” Morgan told CNN. He also denied that “raids” had occurred, calling them “targeted law-enforcement operations.” His comments reinforced the big lie at the heart of Trump’s presidency: that undocumented immigrants are threatening and scary parasites who can be kept away with a wall. “The Mexican government is forcing their most unwanted people into the United States,” Trump said while running for office. “They are in many cases criminals, drug dealers, rapists, etc.”

As The Washington Post and others have noted, immigrants to the United States are less likely to commit crimes than native-born Americans. Far from being a drain on the American economy, immigrants have become an essential component of it. According to a recent study by the Center for a Livable Future at Johns Hopkins University, “The industrial produce and animal production and processing systems in the U.S. would collapse without the immigrant and migratory workforce.” The handful of multinational companies that dominate our food system are hardly being forced to employ immigrant workers. These firms have for many years embraced the opportunity to exploit them for profit.

More than a century ago, when Upton Sinclair wrote The Jungle, the workers in American meatpacking plants were recent immigrants, largely from eastern Europe. Sinclair eloquently depicted the routine mistreatment of these poor workers. They were employed for long hours at low wages, exposed to dangerous working conditions, sexually abused, injured on the job, and fired after getting hurt. In the novel, the slaughterhouses of Chicago serve as a metaphor for the ruthless greed of America in the age of the robber barons, of a society ruled by the law of the jungle. During the following decades, the lives of meatpacking workers greatly improved, thanks to the growing strength of labor unions. And by the early 1970s, a job at a meatpacking plant offered stable employment, high wages, good benefits, and the promise of a middle-class life.

When I visited meatpacking communities in Colorado, Nebraska, Texas, and Washington State almost 20 years ago, those gains had been lost. As I described in my book Fast Food Nation, published in 2001, the largest companies in the beef industry had recruited immigrants in Mexico, brought them to the meatpacking communities of the American West and Midwest, and used them during the Ronald Reagan era to break unions. Wages were soon cut by as much as 50 percent. Line speeds were increased, government oversight was reduced, and injured workers were once again forced to remain on the job or get fired. In The Chain, published in 2014, Ted Genoways wrote about similar changes in the pork industry. And in 2016’s Scratching Out a Living, Angela Stuesse wrote about the transformation of the poultry industry in the rural South, with a prescient focus on the abuse of Latino workers in Mississippi.

All three books reached the same conclusion: What Trump has described as an immigrant “invasion” was actually a corporate recruitment drive for poor, vulnerable, undocumented, often desperate workers.

One of the poultry plants that Stuesse explored, in the small town of Morton, Mississippi, was raided last week. B. C. Rogers, the company that owned the plant in 1994, launched a hiring drive that year called “The Hispanic Project.” Its goal was to replace African American workers, who were seeking a union, with immigrant workers who’d be more pliant. It placed ads in Miami newspapers, arranged transportation for immigrants, and charged them for housing in dilapidated trailers. Within four years, it had brought roughly 5,000 mainly Latino workers to Morton and another meatpacking town in Mississippi, enlarging their population by more than 50 percent. The poultry industry expanded throughout the rural South during the 1990s, drawn by the warm climate and the absence of labor unions. Tens of thousands of immigrant workers soon arrived to cut meat. Charlotte S. Alexander, an associate professor at the Georgia State College of Law put it succinctly: “In the poultry industry, location is a labor practice.”

The immigrant workers arrested in Mississippi the other day were earning about $12.50 an hour. Adjusted for inflation, during the late 1970s, the wages of meatpacking workers in Iowa and Colorado were about $50 an hour.

If you believe the numbers compiled by the Bureau of Labor Statistics, the injury rate among meatpacking workers has greatly declined in recent years. I don’t believe them. During the George W. Bush administration, the Occupational Safety and Health Administration (OSHA) decided that cumulative trauma injuries no longer had to be recorded separately by meatpacking firms. As a result, from 2001 to 2003, the total number of injuries miraculously dropped by one-third. A few years ago, the U.S. Government Accountability Office admitted that meat and poultry workers “may underreport injuries and illnesses because they fear losing their jobs, and employers may underreport because of concerns about potential costs.” One study suggested that two-thirds of the injuries in American meatpacking plants are never officially recorded.

Even if you accept the accuracy of the official statistics, meatpacking remains an unusually dangerous and unpleasant occupation, with an injury rate much higher than that of other manufacturing jobs. Poultry workers stand close to one another with sharp knives, repeating the same motion again and again more than 15,000 times in a single shift, slicing birds as they pass on conveyor belts every two seconds. A 2013 investigation by the National Institute for Occupational Safety and Health found that 42 percent of the workers at a poultry plant in South Carolina were suffering from carpal tunnel syndrome. The work is bloody, difficult, and full of potential harms. Lacerations are commonplace, and the high prevalence of fecal bacteria in poultry plants increases the risk that wounds will become infected. A study of poultry workers in Maryland and Virginia found that they were 32 times more likely than other residents of the area to be carriers of antibiotic-resistant E. coli. Poultry workers suffer from respiratory ailments, chemical burns, fractures, concussions, eye damage, sprains, strains, concussions, and exposure to toxic fumes. Reporting on the industry for The New Yorker, Michael Grabell counted more than 750 amputations from 2010 to 2017.

Last year, two employees of Peco Foods, which operates one of the plants raided in Mississippi, survived amputations during separate accidents at the same facility in Arkansas—and yet OSHA never visited the plant to look for safety problems after the accidents. Deborah Berkowitz, a former OSHA official who now handles worker-safety issues for the National Employment Law Project, told me that the Trump administration’s close ties to the meatpacking industry are making the work even more dangerous. OSHA’s enforcement activity has declined since Trump took office, and the agency now has the fewest inspectors since it was created in 1971.

The emotional toll of working in a poultry plant can be worse than some of the physical ailments. Koch Foods, the current owner of the plant in Morton, settled a case in 2018 with the U.S. Equal Employment Opportunity Commission. Although the company admitted neither guilt nor wrongdoing, it paid $3.75 million to workers at the Morton plant who claimed to have been sexually harassed and punished for refusing to comply. The case brings to mind passages from The Jungle, with female employees allegedly grabbed and groped by supervisors, offered money for sex, promised better jobs in return for bribes, and demoted to humiliating jobs as retribution. Owned by Joseph Grendys, a Chicago multibillionaire, Koch Foods was also cited by the Department of Agriculture for discriminating against African American poultry farmers. According to an investigation by ProPublica this summer, 173 poultry farmers have contracts with Koch Foods in Mississippi, and none of them is black.

In addition to ignoring the poultry industry’s abuse of immigrant workers, the Trump administration has eliminated regulations that protect poultry farmers from being treated unfairly. It has exempted factory farms from Environmental Protection Agency rules governing the release of air pollution. It is permitting the increase of line speeds at poultry and pork slaughterhouses, making worker injuries more likely and jeopardizing food safety.

Mike Hurst, the U.S. attorney for the Southern District of Mississippi, helped coordinate the immigration raid and joined ICE agents on the scene. He is the leading Justice Department official in America’s poorest state, one with a history of racist brutality and some of the lowest rates of undocumented immigration in the country. (Perhaps 0.7 percent of the population of Mississippi is currently undocumented.) “The execution of federal search warrants today was simply about enforcing the rule of law in our state and throughout our great country,” Hurst claimed in a press release. He later defended the raid during an appearance on Tucker Carlson’s Fox News show. “This administration, this president, is all about law and order,” he said. And he said it with a straight face. No top executive of a major meatpacking company has been arrested for violating immigration, worker-safety, food-safety, antitrust, or environmental laws. The adjectives shameful and disgraceful don’t approach the reality of what is now taking place.

Over the years, I’ve spent time with countless farmworkers and meatpacking workers who entered the United States without proper documentation. Almost all of them were hardworking and deeply religious. They had taken enormous risks and suffered great hardships on behalf of their families. Today workers like them are the bedrock of our food system. And they are now being scapegoated, hunted down, and terrorized at the direction of a president who inherited about $400 million from his father, watches television all day, and employs undocumented immigrants at his golf resorts.

The day after the immigration raid in Mississippi, the United Nations issued a report suggesting that everyone should eat less meat to reduce the impact of climate change. That’s a good recommendation. An even better one would be: Don’t buy anything produced by America’s large industrial meatpacking companies. Every dollar that you give them now is blood money, literally and figuratively.

ERIC SCHLOSSER is the author of Fast Food Nation and co-producer of the documentary Food, Inc.