books A Man of Many Words

Peter Martin's The Dictionary Wars: The American Fight Over the English Language shows Noah Webster as the sort of ideologue who's convinced he has a historical mission and carries himself accordingly, writes Scott McLemee. 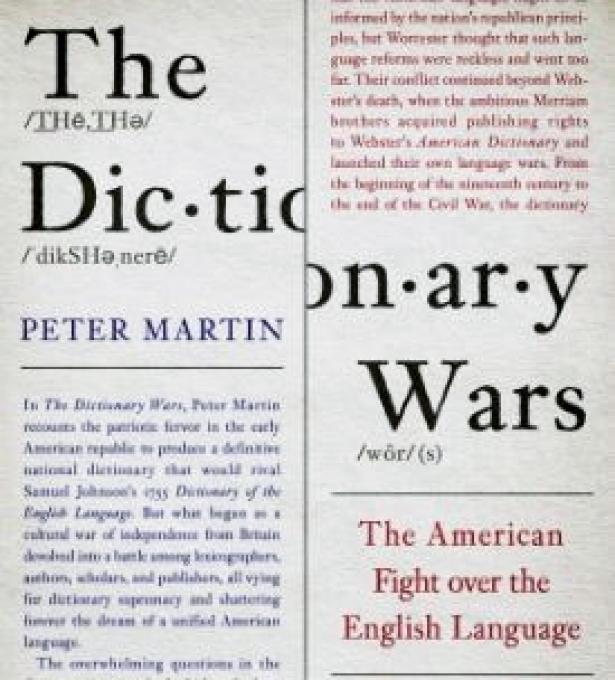 The author of a collection of essays “on moral, historical, political and literary subjects” published in Boston in 1790 acknowledged that they were interventions in the American revolutionary process. “Many of them were dictated at the moment, by the impulse of impressions made by important political events, and abound with a correspondent warmth of expression,” he wrote.

“This freedom of language wil be excused by the frends of the revolution and of good guvernment, who wil recollect the sensations they hav experienced, amidst the anarky and distraction which succeeded the cloze of the war. On such occasions a riter wil naturally giv himself up to hiz feelings, and hiz manner of riting wil flow from hiz manner of thinking.”

The Dictionary Wars: The American Fight over the English Language 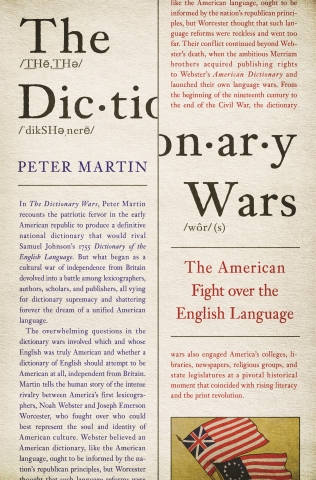 The plunge here -- from the cadence and diction of 18th-century prose into spelling that may look semiliterate even to readers inured to the guesswork orthography of 21st-century social media -- is vertiginous. And all the more so for knowing that the author was Noah Webster. At that point, he was not yet working on his dictionary, the first version of which appeared in 1806. But the seeds of it are already there, planted between the lines of his introductory remarks.

“In the essays, ritten within the last year,” he notes, “a considerable change of spelling iz introduced by way of experiment.” That period just so happened to coincide with the adoption of “the Constitution of the American Republic,” to which Webster makes “a Pledge of Attachment.” His phonetic streamlining of the written word is a calculated blow against British cultural authority -- a declaration of independence, in effect -- while the long decades of work preparing, revising and promoting his American Dictionary of the English Language represented a protracted constitutional convention of sorts.

My analogy is speculative and possibly too far-fetched. But Peter Martin’s The Dictionary Wars: The American Fight Over the English Language (Princeton University Press) shows Noah Webster as every bit the sort of ideologue who is convinced he has a historical mission and carries himself accordingly.

Early on, Martin characterizes him as someone who “made his progress through life more difficult and tempestuous than it might have been had he not been so cranky, irritable and arrogant, unloading in print his politically and linguistically charged opinions, whipping himself up into polemical frenzies, and refusing to temper his language.” This assessment is fully borne out by the biographical account that makes up the first half of the book, and much of it can be applied to the history of Webster’s dictionary following his death in 1843. Rancorous and fanatical in life, Webster remained a posthumous source of rancor and fanaticism in other people.

A combination of aggression and defensiveness was inherent in Webster’s whole project. He staked out a public role as champion of how Americans were using and adding to the English language at a time when British sarcasm on the subject was at its most merciless. Webster had a number of axes to grind, including the argument that the London theater had been a corrupting influence on vocabulary and pronunciation, as were aristocrats and their hangers-on. A well-bred and literate American employed something closer to proper English as it had existed a century or two earlier. But most of all, it was Samuel Johnson who got under his skin -- Johnson’s dictionary, in particular. Among other faults, its widespread acceptance as authoritative served to codify orthography in ways that seemed arbitrary and certain to confuse those learning to read or speak the language.

Webster had been a schoolteacher and doubtless come up against the mystery of why the same letters had completely different pronunciations in “thought,” “thorough,” “cough” and “bough.” If anyone could make a plausible case for the new republic to get hooked on phonics, Webster did. And a few of his reforms have become standard American practice, as with the removal of “u” from “behaviour” or “colour,” or how “theatre,” “spectre” and “fibre” are Americanized by reversing the last two letters.

Webster envisioned a vastly more radical orthographic revolution, with the quarto edition of his dictionary, published in 1828, being the most massive weapon in his campaign. With definitions of some 70,000 words (12,000 more than in the revised edition of Johnson’s dictionary, issued the year before), it also incorporated 10 years’ worth of Webster’s etymological research, as well as examples of word usages drawn from more wholesome sources than Shakespeare’s plays, which Johnson had preferred.

The definitions inclined to piety. Webster intended the dictionary to be “a guide to moral and Christian life,” writes Martin, “a foundation for Christian leadership, and even a reference work for the King James version of the Bible -- a kind of biblical commentary. In later revised editions after his death, the majority of these biblical citations disappeared.”

As did the sometimes-rambling definitions. Likewise, Webster’s suggested phonetic spellings were whittled away from edition to edition -- also the ultimate fate of the etymologies that embodied his ambitions and limitations as a scholar. The process of tightening and refining the dictionary, which began during Webster’s lifetime, was the resultant of a number of vectors, beginning with market forces. The quarto of 1828 sold for the equivalent of $450 today. Webster set to work preparing the first of a number of editions that were more affordable (if by no means cheap) while also engaged in seemingly endless controversies with journalists, professors, disgruntled associates and rival lexicographers.

The redaction and updating of the dictionary continued for some 40 years after Webster’s death, as did the exchange of pleasantries. Martin has read his way through yards of books and pamphlets with titles such as A Gross Literary Forgery Exposed and A Reply to Messrs. G. and C. Merriam’s Attack Upon the Character of Dr. Worcester and His Dictionaries, though the story also requires him to document numerous business transactions and personal vendettas going on outside the public’s view.

The disputes are not now of uniform interest. But once the author steps back for a moment to indicate how closely the American mass media of the day was following the conflict, the level of detail becomes compelling. In its beginnings, Webster’s dictionary is an expression of nationalist sentiment, a patriotic claim to cultural legitimacy -- and in preparing it, the lexicographer is staking claims to moral and intellectual theory that do not go unchallenged on either side of the Atlantic. Following his death, he is remembered as practically one of the founding fathers, as in this tribute from 1854:

He grew up with his country, and he moulded the intellectual character of her people … His principles of Language have tinged every sentence that is now or ever will be uttered by an American tongue … Only two men have stood on the New World whose fame is so sure to last -- Columbus, its Discoverer, and Washington, its Savior. Webster is, and will be, its great Teacher; and these three make our Trinity of Fame.

This branding carried to a point just this side of apotheosis. But the elements that made Webster's dictionary most characteristically his -- the preachiness, the sketchy etymologies, all those weird spellings that he and almost no one else considered a good idea -- are precisely what get removed, piece by piece, under the pressure of criticism (whether scholarly or sarcastic) and market competition from dictionaries that make fewer claims to all-embracing cultural authority.

Book author Peter Martin has been a professor at Miami University, the College of William & Mary and a historian for the Colonial Williamsburg Foundation.His books include Samuel Johnson: A Biography and A Life of James Boswell. He has also written about Irish Shakespearian scholar Edward Malone and gardens and gardening in Williamsburg and Colonial Virginia.

[Essayist Scott McLemee is the Intellectual Affairs columnist for Inside Higher Ed. In 2008, he began a three-year term on the board of directors of the National Book Critics Circle. Between 2001 and 2005, he covered scholarship in the humanities as senior writer at The Chronicle of Higher Education, leaving that to help start Inside Higher Ed, where he serves as Essayist at Large. His reviews, essays, and interviews have also appeared in The New York Times, The Washington Post, The Boston Globe, The Nation, Newsday, Bookforum, The Common Review, and numerous other publications. In 2004, he received the Nona Balakian Citation for Excellence in Reviewing from the National Book Critics Circle. Recent essays of his for Inside Higher Education are available HERE.]