labor How Well is the American Economy Working for Working People?

EPI researchers reflect on the state of labor in the United States. 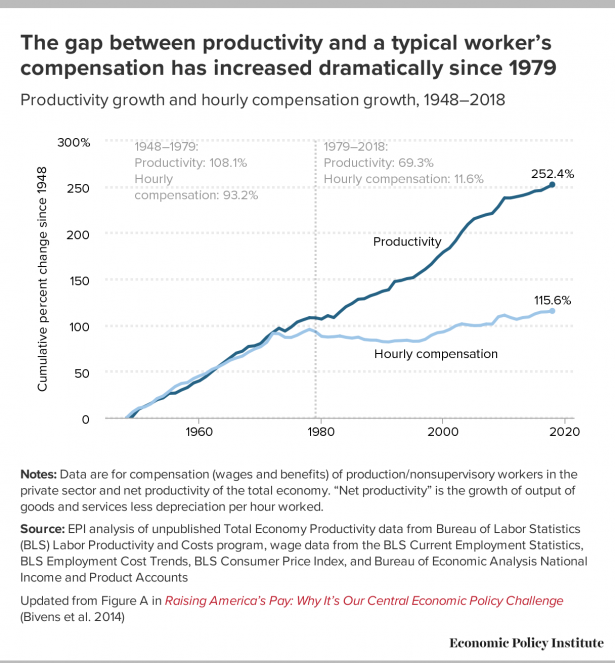 The nation’s unemployment rate has been at or below 4% for the past year and a half. But while a single 18-month stretch of sub-4% unemployment is a good start on an improving labor market, it’s far from sufficient to undo the damage done by a decades-long policy assault on the economic leverage that workers can exert.

This Labor Day, EPI experts have contributed essays on remaining obstacles blocking workers looking for faster wage growth and greater economic opportunity. These essays look beyond the relatively happy news of low unemployment in the very recent past and focus instead on the deep-seated economic roots of workers’ disempowerment. In essence, they examine the many ways economic policy has conspired to let so much of the nation’s productivity escape the paychecks of typical workers—a trend highlighted in a well-known EPI chart (shown here) comparing growth in economywide productivity and hourly pay for typical workers. Productivity and pay marched upward in lockstep for decades following World War II yet have diverged markedly since the late 1970s.

So how well is the economy working for working people as of Labor Day 2019?

Wage growth is weak for a tight labor market—and the pace of wage growth is uneven across race and gender. Elise Gould and Valerie Wilson highlight the failure of today’s tighter labor market to deliver strong wage growth and close race- and gender-based wage gaps. In fact, racial and gender wage gaps have widened since the 1990s—most dramatically for black college graduates.

Wage growth is being held back by political decisions and the Trump administration is on the wrong side of key debates. Josh Bivens argues that wage growth happens if and only if policymakers make it a top priority. Recent months’ low unemployment will pay much larger dividends for workers going forward if it represents a genuine shift in how policymakers weigh the benefits of wage growth versus the risks of inflation, and if it is accompanied by policies that build—or restore—institutions that support workers’ bargaining power.

Working people have been thwarted in their efforts to bargain for better wages by attacks on unions. Heidi Shierholz discusses the importance of restoring one key institution that supports workers’ bargaining power—collective bargaining. She points out that the shrinking share of workers who can bargain collectively as part of a union—which coincides with slowing wage growth—is not a natural outcome of market trends. Interest in being in a union is as high as ever, but union representation has fallen because of a decades-long assault on unions from conservative policymakers.

Black workers endure persistent racial disparities in employment outcomes. Jhacova Williams and Valerie Wilson highlight continued racial gaps in unemployment, and construct a new indicator of underemployment that measures the underutilization of workers’ credentials. Their measure of underemployment examines the share of college graduates who do not obtain employment in “college occupations”—occupations in which more than half of the workforce have a college degree. They find that black college graduates are substantially more likely than their white peers to end up in noncollege occupations.

Employers increase their profits and put downward pressure on wages and labor standards by exploiting migrant workers. Daniel Costa explains how employers have weaponized the nation’s immigration system to keep both immigrant and U.S.-born workers powerless and insecure.

Together, these essays underscore that we must understand and address many factors—including the dynamics of gender, race, and immigration—when crafting policies to give all workers a fair shot at achieving faster wage growth and greater opportunity.