The 2020 Democratic primary election is shaping up to provide the most ambitious blueprint to overhaul US labor laws. And with public frustration toward billionaires and CEOs mounting, it seems like a smart campaign strategy. 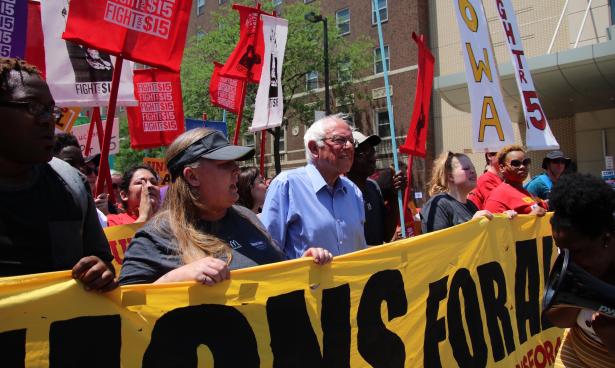 Vermont Senator Bernie Sanders marched with a crowd of hundreds to the Iowa Hall of Fame event in Cedar Rapids Sunday afternoon with striking McDonald’s workers from Des Moines and Cedar Rapids.,

Presidential candidates are going all out to win over working-class Americans.

It’s easy to dismiss these gestures as the usual photo ops, but they reflect the labor movement’s resurgent influence in politics. Most of the Democratic frontrunners are also releasing detailed policy platforms that promise workers everything they’ve ever wanted. Paid parental leave — yes. A $15 minimum wage — check. Paid sick days — done.

And for the first time, most candidates are really paying attention to working women and the challenges they face in the workplace, such as lower pay and few accommodations for pregnant and breastfeeding women.

Sure, not every candidate is promising workers major reform. Some candidates are more interested in incremental changes. But even so, the 2020 Democratic primary election is shaping up to provide the most ambitious blueprint to overhaul US labor laws. And with public frustration toward billionaires and CEOs mounting, it seems like a smart campaign strategy.

“This is our moment to dream big,” Warren said during her campaign announcement event in Lawrence, Massachusetts, a location she picked because of its role as the birthplace of the US labor movement.

Reading the labor platforms for each of the 10 candidates who qualified for the third Democratic primary debate next week, two groups emerged: the labor reformers and the labor supporters. Most of the frontrunners fall into the first category — Beto O’Rourke, Buttigieg, and Sanders have all put out astonishingly detailed proposals that would shift the balance of power from businesses to workers. Joe Biden, Amy Klobuchar, and Andrew Yang are in the second group. They seem to see themselves more as allies to workers and labor unions than true change-makers.

Most of the reformers — Cory Booker, Buttigieg, Harris, Sanders, and Warren — also explicitly support all the following legislation:

Klobuchar has backed all the bills mentioned above in the Senate, except for the Schedules That Work Act.

Here’s a summary of each candidate’s labor platform. Without a doubt, Democrats would need to control both chambers of Congress to make most of these promises a reality.

Booker’s labor platform is thin and somewhat vague, which is an argument for placing him in the “labor supporters” category. But his one signature plan is big enough to shift the balance of power in favor of workers in fundamental ways. That’s the Worker Dividend Act he sponsored in the Senate.

The bill would curb how companies buy back their own stocks, forcing them to give workers a cut. The Worker Dividend Act would mandate that companies buying their own shares must also pay out to their own employees a sum equal to the lesser of either the total value of the buyback or 50 percent of all profits beyond $250 million.

As Vox’s Matthew Yglesias explains, the bill is “a critique of the overall operation of an economic system that people on the left have long argued is systematically broken and stacked against everyone but the very wealthiest Americans.”

Somewhat surprisingly, Buttigieg has one of the most comprehensive labor platforms, including more than just a wish list from labor unions. He wants to make sure domestic workers and farmworkers are covered by US labor laws, which closes a huge loophole that allows employers to exploit vulnerable workers. He promises paid parental leave, a $15 minimum hourly wage (indexed to wage growth), and to let Uber drivers and other gig workers unionize. Here are some other highlights:

Buttigieg also suggests a smart change to temporary visas for foreign workers. High-skilled and low-skilled workers in the US on H-1B or H-2B visas, for example, would no longer be tied to one employer under his proposal. That has been one of the biggest problems with the guest worker programs. Businesses that employ foreign workers end up with too much power over that workforce, making them more vulnerable to abuse and exploitation.

Castro probably has the weakest platform in this group. He hasn’t proposed any major plan to extend new rights to workers, but he does support many of those that his competitors have come up with.

Harris has focused her labor platform on working women and public schoolteachers, in particular. She supports a $15 minimum wage and wants to create stricter penalties for companies that commit wage theft.

Here are more details from her plan to boost wages for teachers:

All of this would cost about $315 billion, her campaign says, and would be paid for through an estate tax.

Here’s one other, non-teacher highlight in her plan:

O’Rourke has a massive labor platform that carefully lays out his plan to boost union membership rates.

Sanders has done perhaps more than any candidate to move Democrats toward more progressive labor policies. He sponsored the Raise the Wage Act and came out with a dramatic labor platform last month.

As Vox’s Tara Golshan explains, rebuilding union membership is central to Sanders’s platform. His plan outlines a series of executive orders and bills that aim to strengthen union membership, punish employers who engage in union-busting practices, and raise wages and benefits.

Here’s what Sanders is proposing to do, without Congress:

Much of Sanders’s plan, like many other candidates’ plans, would require legislation. That includes:

So far, Warren’s labor platform focuses on fixing international trade, just like President Donald Trump’s did. Unlike Trump, however, Warren has a detailed proposal to boost US manufacturing without starting trade wars.

While the US economy and US businesses have benefitted from free trade, it has also wiped out hundreds of thousands of union jobs in the US as manufacturers moved factories abroad.

Warren’s plan focuses on investing a lot more money in research and development of green technology. Here are the highlights:

Despite his brand as a working man’s man, Biden’s labor platform is hardly revolutionary. It’s short and simple:

Klobuchar has one of the vaguest labor platforms of the candidates who qualified for the third debate. Here’s all it says about workers’ rights on her campaign website:

As the granddaughter of an iron ore miner and the daughter of a union teacher and a union newspaperman, Amy will bring one clear but simple guide to the White House: When unions are strong, our country is strong. As President, she’ll stand up against attempts to weaken our unions. That means achieving real labor law reform, ensuring free and fair union elections, protecting collective bargaining rights, rolling back Right to Work laws, and making it easier — and not harder — for workers to join unions.

In June, Klobuchar did release a list of executive actions she would take in her first 100 days as president, which includes many that would make it easier for workers to join labor unions. For example:

Yang is enthusiastic about equal pay and paid time off but makes no mention of labor unions in his platform. Here are the highlights:

Update: this article has been updated to reflect O’Rourke’s support for the Protecting the Right to Organize Act, the Paycheck Fairness Act and the Healthy Families Act and to include executive actions Klobuchar has promised to take.