Bernie Sanders Proposes a Wealth Tax: ‘I Don’t Think That Billionaires Should Exist’

Mr. Sanders is embracing an idea at the center of Elizabeth Warren’s presidential campaign. His proposal goes further in who would be taxed and how much money would be raised. 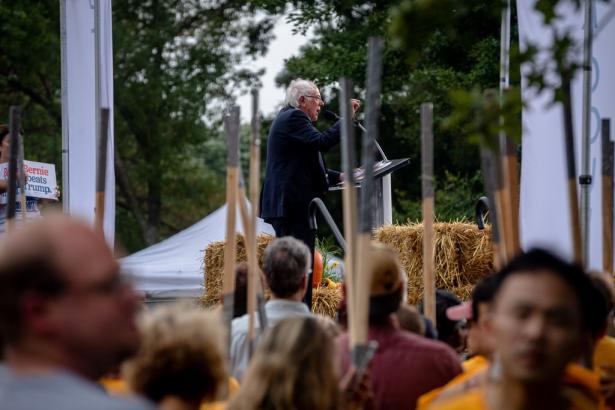 WASHINGTON — Senator Bernie Sanders on Tuesday unveiled a proposal to create a new tax on the wealth of the richest Americans, including a steep tax on billionaires that could greatly diminish their fortunes.

With the proposal, Mr. Sanders is embracing an idea that has been a centerpiece of the campaign of his top progressive rival, Senator Elizabeth Warren. But while Ms. Warren came first, Mr. Sanders is going bigger. His wealth tax would apply to a larger number of households, impose a higher top rate and raise more money.

Mr. Sanders’s plan to tax accumulated wealth, not just income, is particularly aggressive in how it would erode the fortunes of billionaires. His tax would cut in half the wealth of the typical billionaire after 15 years, according to two economists who worked with the Sanders campaign on the plan. Mr. Sanders would use the money generated by his wealth tax to fund the housing plan he released last week and a forthcoming plan for universal child care, as well as to help pay for “Medicare for all.”

“Let me be very clear: As president of the United States, I will reduce the outrageous and grotesque and immoral level of income and wealth inequality,” Mr. Sanders said in an interview. “What we are trying to do is demand and implement a policy which significantly reduces income and wealth inequality in America by telling the wealthiest families in this country they cannot have so much wealth.”

Asked if he thought billionaires should exist in the United States, Mr. Sanders said, “I hope the day comes when they don’t.” He added, “It’s not going to be tomorrow.”

The proposal from Mr. Sanders is the latest sign of the push in the Democratic Party to develop policies for collecting substantially more revenue from the wealthiest Americans by rethinking how they are taxed — a move that could provide large sums of money that could be used to finance new social programs. And it is a significant development in the competition of ideas between Mr. Sanders and Ms. Warren, the two leading progressive candidates in the Democratic primary race.

Both of their plans would need to be passed by Congress in order to take effect — a virtual impossibility unless Democrats win control of the Senate in the 2020 elections, and far from a sure thing even then. Ms. Warren’s plan touched off a number of questions about the feasibility of creating a wealth tax, including whether such a tax would be constitutional, how it would be enforced and whether it would generate as much money as has been projected.

Mr. Sanders, of Vermont, would create an annual tax that would apply to households with a net worth above $32 million — about 180,000 households in total, or about the top 0.1 percent, according to the economists who worked on the plan.

He would create a 1 percent tax on net worth above $32 million, with increasing marginal rates topping out at 8 percent on net worth over $10 billion. For single filers, the brackets would be halved, meaning the tax would kick in at $16 million.

By contrast, the wealth tax proposed by Ms. Warren, of Massachusetts, would apply to households with a net worth above $50 million — an estimated 70,000 households in total.

Mr. Sanders’s tax is projected to raise $4.35 trillion over a decade, while Ms. Warren’s is projected to raise $2.6 trillion over the same time period. Those estimates were produced by Emmanuel Saez and Gabriel Zucman, two economists at the University of California, Berkeley, with whom both the Sanders and Warren campaigns consulted as they developed their proposals. (The projection for Ms. Warren’s plan differs slightly from their original estimate of $2.75 trillion earlier this year.)

Mr. Sanders included several steps in his plan to enforce the tax, including creating a “national wealth registry,” increasing funding for the Internal Revenue Service and requiring audits of many taxpayers who are subject to the wealth tax, including all billionaires.

Mr. Saez and Mr. Zucman calculated how the Warren and Sanders wealth taxes would have affected the fortunes of the richest Americans had each been in effect since 1982. The fortune of Jeff Bezos, the Amazon founder who Forbes said was worth $160 billion last year, would have been $87 billion under the Warren plan and $43 billion under the Sanders plan.

Over all, the economists found, the cumulative wealth of the top 15 richest Americans in 2018 — amounting to $943 billion — would have been $434 billion under the Warren plan and $196 billion under the Sanders plan.

Mr. Sanders is hardly a newcomer to the idea of a wealth tax. In a 1997 book, he wrote that it was “time, high time, to establish a tax on wealth similar to those that exist in most European countries.” In 2017, he included a wealth tax on a list of financing options for Medicare for all.

Ms. Warren was quick to harness the idea in the 2020 race. She released her wealth tax proposal in January, weeks before Mr. Sanders began his campaign.

Since then, the proposal has become a centerpiece of Ms. Warren’s campaign and a fixture of her stump speech, even prompting chants of “Two cents!” from crowds. The money would go toward other Warren policy plans, including her proposals for universal child care, student debt cancellation and tuition-free public college.

Thomas Kaplan is a political reporter based in Washington. He previously covered Congress, the 2016 presidential campaign and New York state government. @thomaskaplan