They also acknowledged, for the first time, that the grounds for torturing Abu Zubaydah—the Saudi Arabian citizen detained in the wake of September 11, still languishing in Guantánamo—were mistaken. 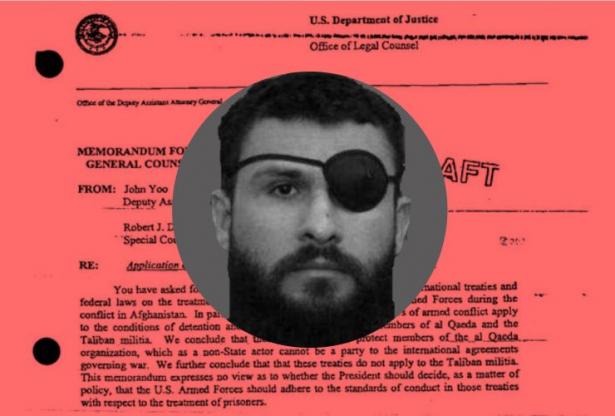 In case you have forgotten, these were the brutal interrogation methods developed by the CIA after the September 11 attacks in 2001. A panel of the Ninth Circuit Court of Appeals crossed the Rubicon in a case involving Abu Zubaydah—the first person thrown into a CIA “black site,” the person for whom former Deputy Assistant U.S. Attorney General John Yoo wrote the infamous torture memo, and the only person subjected to all the “enhanced” techniques. As far as we can tell, Zubaydah, who is still being held at Guantánamo, is the only post–9/11 detainee whose interrogation was the subject of discussion and debate inside the White House. As the court wrote:

The details of Abu Zubaydah’s treatment during this period are uncontroverted: he was persistently and repeatedly waterboarded; he spent hundreds of hours in a “confinement box,” described as coffin-sized; he was subjected to various combinations of interrogation techniques including “walling, attention grasps, slapping, facial hold, stress positions, cramped confinement, white noise and sleep deprivation”; his food intake was manipulated to minimize the potential of vomiting during waterboarding. To use colloquial terms . . . Abu Zubaydah was tortured.

The panel also did what no court, appellate or otherwise, has ever done. It acknowledged that the allegations made to justify this torture—claims that were repeated over and over again by countless officials, including President Bush—were simply mistaken:

Abu Zubaydah was thought to be a high-level member of Al-Qa’ida with detailed knowledge of terrorist plans. A 2014 report by the Senate Select Committee on Intelligence Study on the CIA’s detention and interrogation program (“Senate Select Committee Report”) later revealed this characterization to be erroneous.

This decision, which unfortunately will have no immediate effect on Abu Zubaydah’s detention, came in a case that began a couple years ago, when my colleagues and I served a subpoena on James Mitchell and John Jessen, the former psychologists who designed and implemented the “enhanced” techniques for the CIA—which paid their company more than $80 million. We wanted to ask them questions in support of an ongoing criminal investigation in Poland directed at the officials who created and operated the Polish detention facility where Abu Zubaydah had been tortured. The U.S. Justice Department has shielded Mitchell and Jessen from questioning, arguing that it could reveal classified information.

The district court dismissed the case, saying the information we sought was a state secret. In our appeal a divided panel of the Ninth Circuit disagreed, concluding that at least some of the information we sought was no longer secret, and directing the district judge to disentangle wheat from chaff. The purpose of confidentiality rules, they ruled, “is to protect legitimate government interests, not to shield the government from uncomfortable facts.”

The Ninth Circuit opinion passed virtually unnoticed in the news, but it teaches us a great deal about hubris masquerading as patriotism, which is always a lesson worth learning. If the United States government did not get it right in the first case—the case that set the standard for all the torture that followed and was subject to closer vetting and more heated debate than any other—then we are right to ask whether it is a choice they should have ever entertained.

I represented Abu Zubaydah for more than a decade, beginning shortly after the Bush administration shipped him to Guantánamo in September 2006 and continuing until only a few months ago. In that time, my colleagues and I have challenged aspects of his detention and torture in two federal district courts, two federal courts of appeal, administrative agencies and state courts in Texas, a national court in Poland, and The European Court of Human Rights in France. We have written endlessly about his case. We have made countless trips to Cuba and have conducted investigations all over the world.

The litigation—if you can call it that—has been maddening. The primary challenge to his detention has been underway since 2008 in the United States District Court for the District of Columbia. I take no pleasure in saying this, but the district judge, who needn’t be named here, has been inexplicably slow to act. We became so frustrated at the court’s inaction that we went over his head and urged the federal appellate court to intervene and order the lower court to get on with it. At this writing, the appellate court has not yet ruled. Abu Zubaydah has also never been charged in the military commission system, but we even took the extraordinary step of demanding that he be charged there, where we could finally make plain that he committed no act that authorizes his detention—even a kangaroo court is better than no court at all. That demand has also gone unanswered.

Through it all, we have insisted that the “enhanced interrogations” used on Abu Zubaydah were torture, and that he had no connection to Al-Qa’ida or the attacks of 9/11. Yet it took until now for a court to speak what is plain.

The passage of time explains a great deal. The country is gradually reaching the point when it can publicly face up to our history as torturers precisely because it is history. It is not simply that it happened in the past, but that the controversy no longer stirs the political blood. We have moved on; waterboarding is so 2002. When an issue drops out of the news cycle so completely—when it becomes as unfamiliar to most Americans as COINTELPRO—then it has lost its political potency. It no longer has the capacity to stoke political action.

For most of the post–9/11 era, employing the word torture was an act of political speech that marked the speaker as a partisan. Torture was not simply an outrage that happened elsewhere, committed by others; it was something perpetrated by the Bush administration, and using the word meant leveling a charge. Not always, of course, but often enough to make it taboo among those who wished to appear nonpartisan. Now it is fast becoming just another word. Defused, it loses its explosiveness, and may be handled freely, even by those who seek to keep up an appearance of evenhandedness, including judges.

Even worse, it can now be recast in service of one of our most cherished myths—that while we may stray from the path of righteousness, we will eventually find our way back as we labor to form “a more perfect Union.” This teleological view of history encourages us to view the past as benighted in order to intensify our perception of the present as enlightened. We like a dark past, as long as it is also distant.

Yet the most important role of a national disgrace that has faded into the distant past is the permission it gives to the present. As a political matter, a wrong that escapes condemnation is no wrong at all. Scandal unpunished is no scandal. If society never registers its collective disapproval, either in a court of law or the court of public opinion, the behavior embeds itself within the range of acceptable policy responses. This invites not merely repetition, but expansion. Once we tortured prisoners; now we torture children at the border.

Today, there is a credible allegation that our sitting president tried to influence a presidential election by coercing a foreign government into investigating his political opponent. As expected, the allegation has become the object of partisan fury. Repeating it has become an act of political speech, marking the speaker as a partisan.

As before, the risk is great that our values will once again succumb to our politics. Too many people will tiptoe around this disgrace as they did around torture, at least until it is safely behind us. Then they will condemn the behavior as a betrayal of our “true” principles. But by that time, it will be too late. We will have moved on to something worse.

We like to believe that values have a power of their own, and can compel a result even when there is no political will behind it. The lesson of history is not kind to that belief. The arc of the moral universe is very long indeed, but we should be clear-eyed that it rarely bends toward justice when justice is needed most. If we are to make our values meaningful, we must demand that they be honored even when sitting politicians are unwilling to act, for that is the only time our values can do much good.

While we have you...

...we need your help. You might have noticed the absence of paywalls at Boston Review. We are committed to staying free for all our readers. Now we are going one step further to become completely ad-free. This means you will always be able to read us without roadblocks or barriers to entry. It also means that we count on you, our readers, for support. If you like what you read here, help us keep it free for everyone by making a donation. No amount is too small. You will be helping us cultivate a public sphere that honors pluralism of thought for a diverse and discerning public.