Vietnam Moratorium: A Day To Remember

The organizers had a simple idea; on this one day, people opposed to the war would halt “business as usual” and take some action – large or small - to signify their desire for peace. 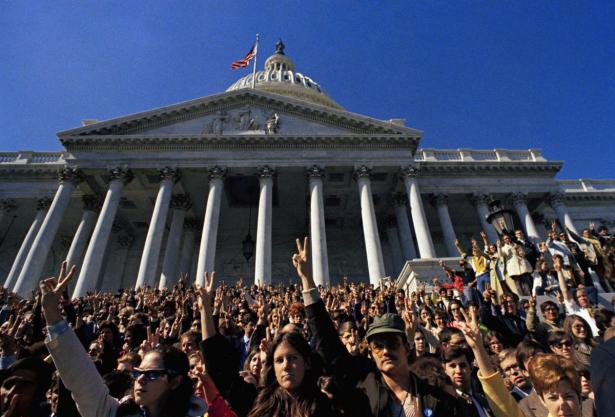 Moratorium Day demonstrators fill the steps of the U.S. Capitol on Oct. 15, 1969 in Washington. Many of the protestors were staff members of senators and representatives. , (AP Photo/Charles Tasnadi)

Life magazine described it as “the largest expression of public dissent ever seen in this country. Newsweek pronounced it a day, destined to go down in history along with Coxey’s Army, the Bonus Marchers and the 1963 March on Washington. Yet fifty years later, the occasion has faded from view.

The Moratorium occurred during one of the darkest periods of the Vietnam War. 40,000 Americans soldiers were already dead. During the first eight months of Richard Nixon’s Presidency, the death toll was averaging more than 500 men a month, with no sign of abating. On the Vietnamese side, hundreds of thousands had perished, several million rural people were displaced, and large swaths of arable land scorched by chemicals and bombs.

The organizers of the Moratorium had a simple idea; on this one day, people opposed to the war would halt “business as usual” and take some action – large or small to signify their desire for peace. It was initially expected that these would be mainly campus events. But something about this modest, open-ended approach had such rapid appeal to the “over thirty” adults, that plans proliferated across the country.

As of midnight October 14, hundreds of demonstrators were on the steps of the Capital reading out the names of the American soldiers, who had died in the war. By morning, in big cities and small, in churches and synagogues, federal buildings and town halls, in libraries and parks, perhaps as many as two million people were expressing their opposition to the Nixon Administration’s pursuit of the war.

In New York City alone, there were scores of events. At the Old Trinity Church near Wall Street the bells tolled, as prominent businessmen whose disillusionment had grown exponentially, participated in an all-day service. Art galleries, museums, publishing houses and many Broadway theaters closed for the day, or created activities specifically devoted to peace.

By 1969 large rallies in Washington DC, New York, and San Francisco had become familiar. More unusual were the gatherings in other locations – Salt Lake City, Pittsburgh, Minneapolis, Little Rock and Austin – where men and women turned out in droves. In Lexington, Kentucky, 2700 people stood quietly in front of the Federal Court House in remembrance of the war dead from their state. In Cicero Illinois, normally a conservative bastion, 800 students from Morton Junior College participated in an antiwar assembly, while 300 housewives from nearby River Forest marched to the local post office, where they mailed letters to the President urging him to stop the war.

At a press conference, preceding the event, Nixon had been asked for his thoughts on the Moratorium. To which, he had testily replied, “Under no circumstances will I be affected by it.” Nothing could be farther from the truth. Having watched President Johnson destroyed by the pressure of antiwar dissent, Nixon was determined to avoid his fate. Indeed the swelling tide of opposition forced him to cancel DUCK HOOK – an evolving plan for the aerial mining of Haiphong harbor and the use of B-52 bombers over North Vietnam, vigorously promoted by National Security Advisor Henry Kissinger.

Furthermore, at a time when the Joint Chiefs of Staff and the US Military Command in South Vietnam were fiercely resisting the removal of US troops, Nixon was compelled to accept a schedule of withdrawals, which could potentially unravel the entire military project.

The energy, hopefulness and idealism, present on Moratorium Day, had a profound effect on many of the journalists covering the events. This also stiffened the spine of some skittish members of Congress, who were slowly finding their voice and would eventually use their votes.

Stopping the war would require many future years of protest, and a widening of dissent to include Vietnam veterans and other constituencies. But those fall days established a limit, beyond which, even Richard Nixon could not transgress.

In recent accounts, the role of the peace movement in stopping the Vietnam War has been unjustifiably minimized. Fifty years later, and in our own dark time, it is worth remembering that inspiring Moratorium Day of October 15, 1969, when diverse groups of people, from every region of the country, stopped what they were doing and joined with co-workers, family and friends to assert their opposition to militarism and desire for peace.

Carolyn Eisenberg is a Professor of history and U.S, foreign policy at Hofstra University. She is the author of a forthcoming book, Never Lose: Nixon, Kissinger and the Myth of National Security and a contributor to recently published Waging Peace in Vietnam.