tv Damon Lindelof’s Watchmen Is A Reckoning Worth Waiting For

HBO's Watchmen's writing presents through-lines from slavery to Reconstruction to the so-called “alt-right”; from, as Rage Against The Machine once put it, those who work forces to those who burn crosses. 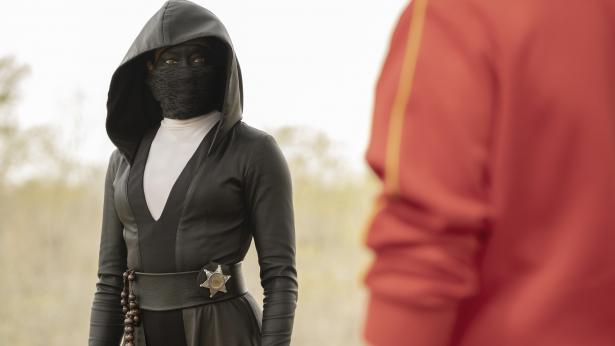 Alan Moore’s reflexive rejection of any adaptation of his work is itself the stuff of legend; he famously told Terry Gilliam that Watchmen—Moore and Dave Gibbons’ highly influential comic book series—was unfilmable, and later withdrew his name from the credits of Zack Snyder’s 2009 adaptation. Terry Gilliam seems to have agreed with Moore, in that he felt the beyond-intricate narrative of the comics would be better served by a miniseries instead of a feature-length film. Gilliam never got to make a Watchmen, and Snyder’s film, while faithfully recreating the look of the comics, misinterpreted the material by reveling in vigilante violence rather than condemning it. But, 10 years after that missed opportunity, a Watchmen series has come to HBO, bringing with it stellar performances, a potentially riveting deconstruction of racial inequality and policing in the United States, the desire to be many things at once (which is standard for creator Damon Lindelof), and Moore’s requisite disapproval.

This Watchmen series exists both inside the context of its source material and apart from it. The events of the comics are canon, including the rise and decline of masked vigilantes, a Watergate-free Nixon presidency, and a squid-like alien monster. There are callbacks and Easter eggs aplenty, as well as older, more cynical versions of characters like Laurie Juspeczyk—now Laurie Blake, and played by Jean Smart—a.k.a. the second Silk Spectre. As such, some familiarity with the comics is helpful in navigating the story, but the writers, including Lindelof, Cord Jefferson, and fellow The Leftovers alums Nick Cuse and Lila Byock, are invested in charting a new path. The primary focus is miles away from New York City, the site of said psionic squid attack; the story begins in Tulsa, Oklahoma, on the day of the 1921 Tulsa Race Massacre that claimed the lives of hundreds of Black residents, resulted in thousands more being detained for their “safety,” and demolished the once-thriving district of Greenwood, known as Black Wall Street.

Damon Lindelof; based on Alan Moore and Dave Gibbons' comic book series of the same name

That agonizing open makes the pilot, helmed with characteristic panache by Nicole Kassell, a particularly unsettling introduction to the show, and one that practically requires you to watch the next episode—in part because you won’t want to tear your eyes from Regina King and Tim Blake Nelson, but also to keep viewers from writing off the show as exploiting Black people’s pain. Watchmen then leaps into the present day while remaining in this alternate version of Tulsa, which is a fascinating mix of idealized notions and stark realities. President Robert Redford (that’s right) has implemented a form of reparations for the descendants of the victims of the Tulsa Race Massacre, and the police operate with considerable oversight, including regulated use of firearms. But no one pretends that those measures have leveled the playing field or eradicated white supremacy, not when the Seventh Kavalry (named after the Army regiment that played a big role in the attacks on Native Americans in the U.S. expansion westward) is nativism incarnate. In Watchmen’s alternate reality, the police bear the brunt of the Seventh Kavalry’s violence, which is why the entire force—including superhero-adjacent personas like Sister Night (King) and Looking Glass (Nelson)—wears masks.

Here’s where things get tricky, and why the pilot, which screened at New York Comic Con, has drawn some criticism for setting up what looks like a false dichotomy between the Tulsa police and white nationalists. But Lindelof and his co-executive producers Kassell, Tom Spezialy, and Stephen Williams quickly earn back trust with the second hour, then in subsequent episodes that are full of graceful world-building, deft characterization, nuanced writing, but little thin-blue-line boosterism. The visuals are dazzling even in this age of effects-heavy storytelling: Episode titles pop up in the wake of carnage, a stately English manor is the site of mayhem by way of The Conformist, and the construction of an eighth world wonder is appropriately wondrous. But Watchmen’s flair is deployed with great purpose—to create a world at once connected to and distinct from that of Moore and Gibbons’ work, where systemic inequality is treated as both the historical and pertinent issue it is in real life.

Like the comics, Watchmen explores abuses of power, the dangers of unquestioning faith in institutions, and moral colonialism (also, plain old colonialism). There are times when that examination grows unwieldy, especially as season one adds faces new and familiar (Jeremy Irons is Adrian Veidt, so go ahead and claim your bets), as well as more fantastical elements. The ambition of Watchmen sparks concern that its mythology will go more the way of Lost than The Leftovers, but by the end of the six episodes made available to critics, the big picture has been properly framed. And like a Hieronymus Bosch painting, it’s intricately detailed and expansive, addressing the ongoing racism in Tulsa, Angela Abar a.k.a Sister Night’s personal history, along with just what the enigmatic Lady Trieu (Hong Chau) is up to in her trillion-dollar compound.

The cast is owed a lot of credit for keeping the momentum going and the series grounded. King contains multitudes—as the de facto lead, she is capable of great compassion and anger in her quest for justice, which is complicated by her years on the force. Nelson’s presence is as calm as it is disquieting; along with Sister Night, Looking Glass follows in the morally ambiguous footsteps of their Watchmen predecessors. Chau is magnetic when she is on screen, but fair warning to the Chau hive: Lady Trieu operates in the periphery for much of the first six episodes. As one of the “heroes” to survive the attack on New York and the banning of vigilantes, Smart’s Agent Laurie Blake has one much more sensible heel in the past, the other in a present where she’s devoted her career to establishing who the “good guys” are. “You know how you can tell the difference between a masked cop and a vigilante?” Laurie asks Angela at the funeral of the Tulsa officer whose murder, like The Comedian’s in the comics, sets things in motion. While giving nothing away, Angela responds “No.” “Me either,” says Laurie, dryly. This exchange is short but meaningful, and perfectly acted—who needs masked heroes when you can watch two award-winning actors engage in a battle of wits?

Though its messaging gets muddled—especially in the sixth episode, which should raise the question of whether some symbols are too entrenched in violent, racist history to ever be repurposed or otherwise subverted—Watchmen is commendably bold in its dive into this country’s fraught past and present. To the likely chagrin of some, the writing presents through-lines from slavery to Reconstruction to the so-called “alt-right”; from, as Rage Against The Machine once put it, those who work forces to those who burn crosses. But just as its central mystery deepens and branches out into new conspiracies, Watchmen doesn’t presume there’s a single root of evil. As it continues to dig up the past, Watchmen could provide a real reckoning—the will is certainly there, as is the talent. Season one was written as a standalone, according to Lindelof, which means the final three episodes are load-bearing ones. Let’s just hope they don’t lose sight of the real monsters in their search for heroes.