Donald Trump Is Not Being Lynched. But The Effects of Lynch Culture Are Real

Donald Trump says we’re witnessing a lynching. A lynching isn’t something you can win. Emmett Till was lynched. He was 14 years old. 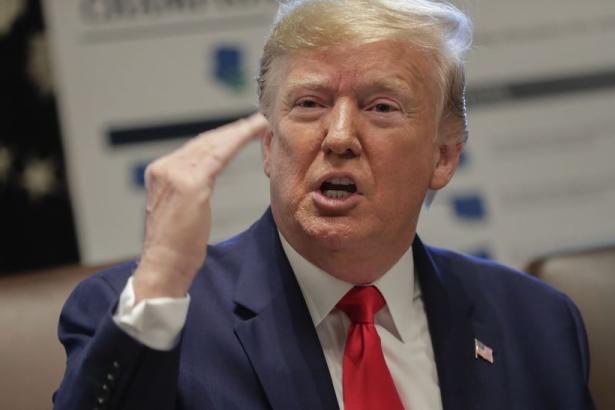 “All Republicans must remember what they are witnessing here — a lynching. But we will WIN!” President Trump wrote Tuesday. But a lynching isn’t something you can win., Pablo Martinez Monsivais/Associated Press

He refers to the impeachment inquiry as a lynching. Merriam-Webster defines lynch as “to put to death (as by hanging) by mob action without legal approval or permission.”

“So some day, if a Democrat becomes President and the Republicans win the House, even by a tiny margin, they can impeach the President, without due process or fairness or any legal rights,” he tweeted Tuesday morning. “All Republicans must remember what they are witnessing here — a lynching. But we will WIN!”

A lynching isn’t something you can win. Emmett Till was lynched. He was 14 years old.

In 1955, Till was a Chicago teen visiting family in Mississippi. A white woman claimed he grabbed her, whistled at her, and made crude comments. She lied. Her husband and his friend kidnapped him, tortured him beyond recognition, and shot him in the head.

They used barbed wire to tie his body to a cotton gin fan and threw him into the Tallahatchie River. His killers were acquitted by an all-white jury.

What happened to Till? That is a lynching. Last Saturday, the Emmett Till Memorial Commission unveiled the fourth marker dedicated to him since 2008, when the original sign was stolen. The signs have been taken, vandalized, and shot at over and over.

The latest memorial is bulletproof. Sixty-four years after his murder, racists don’t want us to remember Till and the racist violence that eats at the soul of America.

Not enough of us learn about the true history of the country in school. When “Watchmen” debuted on HBO Sunday night, it opened with the Greenwood massacre, the terrorist attack of a Tulsa neighborhood known as “Black Wall Street,” where there were 300 black-owned businesses.

The scenes show black people murdered in the street, businesses on fire, and a plane dropping a bomb. This is not TV exaggeration. This happened in America. And it was clear from social media Sunday night and all day Monday that thousands of viewers had never heard of what is referred to as the “Tulsa Race Riot.”

It’s been almost 100 years, and this month, archeologists are searching Tulsa for evidence of mass graves. At least 300 black men, women, and children were murdered; 10,000 were displaced. And it took a brilliant television show to get the country talking about it.

Be clear. There was no riot. It was terrorism inflicted on black people by white supremacists, the kind of people Trump likes to believe are “very fine.” Trump is the same man who called Black Lives Matter activist Mercutio Southall Jr. disgusting and said he deserved to be “roughed up” by Trump supporters at a rally in November 2015.

The delight he takes in the pain of black people, the way he encouraged the country to turn against football players protesting police brutality and oppression — this is the way of supremacy. Racists used to smile and pose for pictures during lynchings.

Trump believes in the lynching of black people. In 1989, he spent some $85,000 on full-page ads to bring back the death penalty to execute Korey Wise, Antron McCray, Yusef Salaam, Raymond Santana, and Kevin Richardson. Teenagers. Five black and brown boys wrongfully accused of raping a white woman. He wanted The Central Park Five, now known as The Exonerated Five, dead. He didn’t care about proof. He just wanted murder.

It is the nation’s first memorial dedicated to the legacy of enslaved black people, people terrorized by lynching, racial segregation, and Jim Crow. People who even in 2019 are considered a threat upon sight, their skin criminalized.

Earlier this month, Atatiana Jefferson was killed by a police officer who was supposed to be performing a safety check. Black people are not safe in this country. But Trump considers his impeachment inquiry a lynching.

People say it’s a distraction and we shouldn’t pay attention. Except we must. This is a man who encourages hate. His own supporters happily wear shirts that read, “Rope. Tree. Journalist. Some Assembly Required.”

Two years ago, when I was a Kansas City Star columnist, I was swarmed with e-mails, phone calls, and letters laced with racist rhetoric and Trump support. The n-word was the norm in my inbox. The words “tar and feather” were a cheer.

“You are exactly why tall trees and ropes were made,” a reader named Jeff from Montana wrote to me.

Any time I wrote about Trump or the NFL, or protested police brutality, I would get this kind of violent response. My life was threatened twice. One reader thought I should be tied to the back of a truck and dragged out of town.

This is not shocking. I am not an isolated incident. What I’ve experienced is subtle compared with what those who’ve come before me endured.

Ida B. Wells risked her life as an investigative journalist — a black woman, traveling the country and exposing the horrors of racism and lynching.

“Our country’s national crime is lynching. It is not the creature of an hour, the sudden outburst of uncontrolled fury, or the unspeakable brutality of an insane mob,” she said in a speech in 1900.

“It represents the cool, calculating deliberation of intelligent people who openly avow that there is an unwritten law that justifies them in putting human beings to death without complaint under oath, without trial by jury, without opportunity to make defense, and without right of appeal.”

Black men were murdered for looking white men in the eye. Black women were raped by white men as punishment. We like to think of these things as America’s tragic history.

We don’t want to remember our racist truth. We want to shoot holes through America’s reality the way supremacists tried to destroy the memory of Emmett Till.

It’s easier to be retroactively heartbroken while learning of American tragedy and being entertained on HBO than it is to recognize the truth of right now.

Lynching was real. It happened. And the effects of lynch culture live on today.

Police brutality, the school-to-prison pipeline, segregated schools, excessive sentencing, and the continued racial inequity are all rooted in racism and the supremacist mentality that believed lynching was some sort of national justice.

Trump was right. We’re witnessing a lynching. But it is not his.