In the three years since Trump turned Michigan red, education has emerged as a potent political issue in the state, thanks to a steady stream of grim studies and embarrassing news stories. 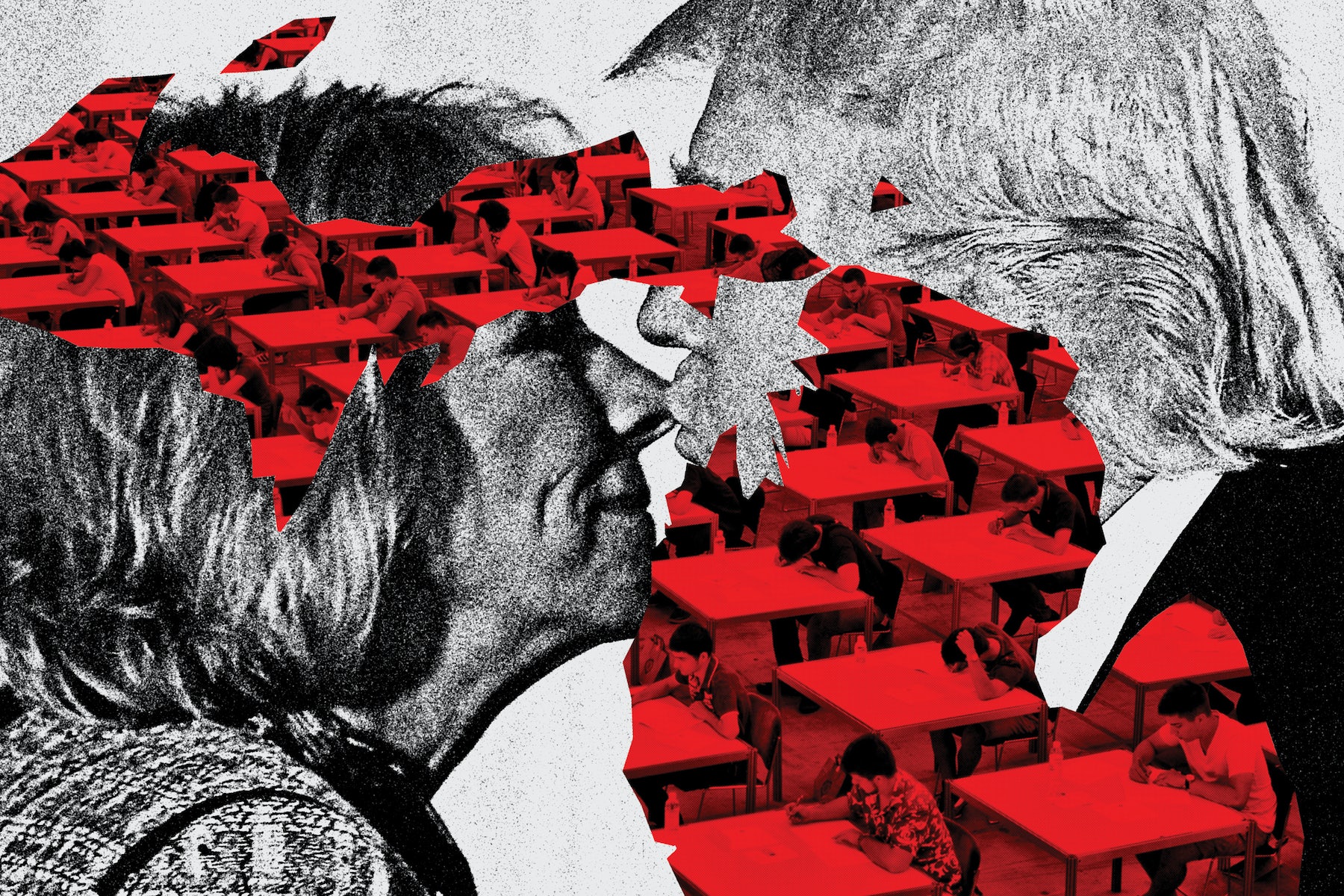 In 2016, Darrin Camilleri was 24 and teaching at a Detroit charter school 20 miles from where he grew up, when Michigan lawmakers took up a measure to implement more rigorous oversight of the city’s charter schools. Seemingly anyone could open a charter in Detroit, and the schools closed just as suddenly as they opened. From his classroom on the city’s southwest side, Camilleri watched the reform effort fail. “Watching that play out really showed me the downside of deregulation,” he told me. “No one is holding anyone accountable.” That year, he decided to run for state representative in southern Wayne County, a largely blue-collar area that shades rural at its edges. Rather than hewing to standard Democratic talking points—health care, for instance, or Donald Trump’s erratic comments—Camilleri made charter school oversight and school funding his central issues, and in 2016, he became the only Democrat to flip a Republican state house seat in Michigan.

Trump would win the state by the slimmest of margins—just 10,704 votes. Today, his political advisers are determined to court the same coalition of suburban, rural, and blue-collar voters that sent him to the White House three years ago, but the president will have a serious liability during this cycle: Betsy DeVos. When Camilleri ran for reelection in 2018, he lost count of the number of people he met who still supported Trump but had come to loathe DeVos. “She is the most polarizing figure in Michigan,” Camilleri told me. “People can’t stomach the fact that Trump picked her. They care about good schools.”

In the three years since Trump turned Michigan red, education has emerged as a potent political issue in the state, thanks to a steady stream of grim studies and embarrassing news stories. Between 2003 and 2015, the state ranked last out of all 50 for improvement in math and reading. According to a recent study, Michigan now spends less on its schools than it did in 1994. Republicans have slashed funding to give tax cuts to big businesses. And the number of people who choose to become teachers has fallen dramatically.

Voters might not have blamed Michigan’s education woes on the GOP four years ago, but they do now. This summer, I spoke to business leaders and lawmakers who told me that a gulf is opening up between the state GOP and a handful of key constituencies—suburbanites, rural voters, and business leaders. It’s a shift that could endanger not just the state GOP, which has long controlled Michigan’s legislature, but Trump himself.

Consider the political climate in Michigan’s suburban districts. In 2018, when Padma Kuppa challenged a Republican state representative, she homed in on the GOP’s role in undermining public education and won, claiming a seat in Troy, an affluent suburban district north of Detroit that Democrats had never held before. Suburban districts like the one in Troy regularly top “best schools in Michigan” lists, with high test scores and graduation rates, and loads of AP offerings. “People here like their public schools, regardless of what party they belong to,” Kuppa said. The GOP’s steady expansion of a largely unregulated charter school sector has very little to offer voters in communities like hers.

Matt Koleszar, a high school social studies and English teacher, won his race for state representative in suburban Plymouth with a message of what he describes as “tenacious support for public schools.” His call for adequate school funding resonated in this “purple” district, he told me, but so did tying his opponent, Jeff Noble, to Betsy DeVos. Noble had scored an endorsement from the education advocacy group DeVos founded, and raised thousands from her extended family. In 2018, he even backed a controversial law to give charter schools a cut of any property tax increases at the county level. “When I went door to door, explaining to people that this meant that their taxes were going to some for-profit charter school headquarters that’s not even in the district, they were outraged,” Koleszar said.

Trump’s plan to keep Michigan in his column includes luring back suburban voters who defected in 2018. His chief campaigner in Michigan, the new head of the state GOP, Laura Cox, should know as much; she lost her suburban Senate seat to a Democratic challenger, a teacher who’d never run for office before, and who had campaigned on a promise to give more money to public schools. For now, however, Cox and the state GOP seem as cozy with the DeVos family—and as addicted to their money—as ever.

That relationship could backfire on Trump not only in Michigan’s suburbs, but also in rural areas, where the GOP’s education policies have even less to offer voters. There, the local schools are foundational community institutions, and the conservative push to privatize public services has transferred bus drivers, janitors, cafeteria workers, and even some coaches on to the payroll of private contractors that pay less than the state does while providing fewer benefits. “When you’ve gutted all of the insurance for these jobs, they’re not that attractive,” said Keith Smith, the superintendent of schools in rural Kingsley, Michigan. Cuts have forced school districts like his to ax “extras,” such as music, counseling, and the vocational programs that prepare students to work in skilled trades.

In July, when CNBC released its annual list of the “best states for doing business,” Michigan had dropped 13 places. The state’s schools are now so underfunded that they are no longer churning out the qualified graduates that investors look for when starting a new business. “We’re like the frog in the water that’s getting warmer and warmer,” said Rob Fowler, the CEO of the trade group representing 27,000 of Michigan’s small businesses. Last year, he and Business Leaders for Michigan convened an ambitious effort called Launch Michigan to bring together key stakeholders, in its parlance—businesses, philanthropic organizations, and teachers’ unions—and fix what ails the state’s schools. But beneath its buzzwords and hopeful calls for unity is sharper stuff. The business community has been a reliable cheerleader for the GOP and its legislative priorities; now, that alliance is fraying. In the coming months, Launch Michigan will present specific recommendations to the state legislature, urging policymakers to change course on such controversial topics as school funding and charter school oversight, keeping the GOP’s dismal track record on education in the news as the 2020 balloting nears.

These shifts amount to a subtle but significant fracturing in the coalition that helped hand Michigan to Trump. Is it enough to cost him the state? That’s less clear. Rural voters may care more about cultural issues, like gun rights and abortion, than they do about DeVos. What’s more, the GOP has largely succeeded in gutting teachers’ unions, which means that there are fewer members to donate to Democratic candidates and knock on doors. Still, the success of candidates who yoked their opponents to DeVos in 2018 should provide valuable lessons for the eventual Democratic nominee, not only in Michigan but also in Wisconsin, Pennsylvania, and Florida, where the GOP has embraced her agenda. For Democrats who have spent much of the last decade teaming up with the GOP to expand charter schools, a new strategy could prove fruitful. Trump, after all, may have trouble distancing himself from DeVos’s legacy: He announced his reelection bid at Orlando’s Amway Center, named for the multilevel marketing company that has so enriched her family.