Thanks to Sanders, Conditioning Aid to Israel Is Entering the National Conversation

At the J Street Annual Conference, Sanders was a crowd favorite, and can take credit for creating space for a more robust discussion of the U.S.-Israel relationship. 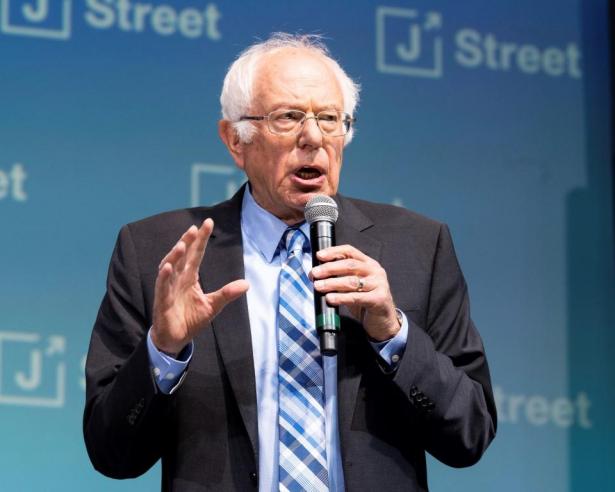 The Obama officials-turned-podcasters had already interviewed Michael Bennet, Pete Buttigieg, Julián Castro, and Amy Klobuchar before the thousands of students, activists, and community leaders in attendance. But Sanders was a crowd favorite, and he can take credit for creating space for a more robust discussion of the U.S.-Israel relationship, offering a progressive blueprint going forward. Maybe it was just from where I was sitting, but Rhodes didn’t sound as bubbly as when he had interviewed Mayor Pete.

J Street, since its founding over a decade ago as a counterweight to the lobbying giant American Israel Public Affairs Committee (AIPAC), is no longer a David. It commands the attention of Democratic presidential candidates and the ire of Republicans (no GOP speakers were in attendance, and the organizers and T-shirts embraced Trump’s dual-loyalty line about voting Democratic as a badge of honor). And though J Street has yet to integrate into its platform some of the bolder ideas of its left flank, like conditioning the $3.8 billion of annual military aid that U.S. taxpayers send to Israel, that conversation has become a centerpiece of the proceedings, an unavoidable concern as the Netanyahu government has accelerated human rights abuses of Palestinians in the occupied territories and those who hold Israeli citizenship. And we can thank Bernie Sanders for mainstreaming such a proposition.

Vietor went straight into that question, asking Sanders to be specific about “When and why you would condition aid to Israel?” Would settlement construction clear the bar or would it have to be annexation?

A savvy politician, Sanders first worked the crowd. “Just a couple of things …” said Sanders, standing up from the armchair. “Number one: I am very proud to be Jewish, and I look forward to being the first Jewish president of this country.” He then emphasized that the Jewish people uniquely understand “the dangers of white supremacy and racism” and that “what is going on in Gaza right now, for example, is absolutely inhumane, it is unacceptable, it is unsustainable.” It was a call to action for the progressives in the crowd.

“So I would use the leverage,” said Sanders. “$3.8 billion is a lot of money. We cannot give it carte blanche to the Israeli government … We have the right to demand respect for human rights and democracy”—though the candidate did not go into specifics.

Buttigieg, in the previous plenary session, had talked about what would constitute the conditions necessary to hold back aid to Israel, yet he had sounded Pollyanna-ish. When the mayor of South Bend said, “If we continue to see steps that are potentially destructive,” I had hoped a narrator would chime in saying, “We have.”

Indeed, the Israel often heralded as the only democracy in the Middle East by politicos of both parties now exists only in the imagination or in memory. Earlier on a panel about how the Israeli government stifles dissent, human rights advocate Hagai El-Ad cautioned against nostalgia for the “good old days” before Netanyahu and Trump, which establishes a false narrative.

“The de facto annexation happened a long time ago,” said El-Ad, the executive director of the watchdog group B’Tselem, noting that even under President Obama the “killing of Palestinians with impunity and the oppression of Palestinians” continued. “We have already been living in a one-state reality for some time,” he said. “Five million Palestinians have no political rights … that’s what we’re up against. These are the facts.”

“We shouldn’t be surprised that a 50-year occupation would bleed into Israeli society,” said Avner Gvaryahu of Breaking the Silence, which collects the testimonies of the Israel Defense Forces. He urged his co-panelists to stop calling it just an occupation: “It’s a military dictatorship controlling millions of people by force.”

So can the next Democratic presidential nominee, in the face of Trump and Netanyahu, take back the narrative and policy toward Israel?

Listening to the contenders, I wasn’t so sure. Because getting “Israel back in the direction of a two-state solution,” as Castro suggested, is insufficient. Because visiting Israel to articulate policies, as Bennet proposed, isn’t going far enough. And because Israel is not, as Buttigieg argued, “a friend … acting in a way that you think might hurt your relationship, might hurt them, it might even hurt you.” The problems are deeper; they are systemic, weaponized, and perpetuated by American taxpayers.

These challenges, as Sanders knows well, require a people-powered movement, not simply talking points from the blob. Maybe that’s why Rhodes looked so uncomfortable.