More Americans engaged in work stoppages last year than since 1986 – and the successful GM strike may encourage other union leaders, experts say.

The recently ended General Motors strike was part of a surprisingly large recent wave of walkouts, and by many measures, the 49,000 strikers emerged so well from their 40-day showdown with the US auto giant that the results could help inspire more worker militancy and strikes, labor analysts and experts say.

“They did pretty well,” said Kristin Dziczek, vice-president of industry, labor and economics at the Center for Automotive Research, based in Ann Arbor, Michigan. “They got more money. They got a pathway to regular employment for temporary workers. They defended their healthcare” when GM was seeking to sharply increase the premiums the United Automobile Workers (UAW) members paid.

The GM workers also received an $11,000 signing bonus, and the automaker agreed to essentially end its two-tier wage system by folding the lower tier into the top tier within four years. All those workers, lower-tier and top, will earn $32 an hour at contract’s end – some lower-tier workers now earning less than $20 an hour.

Dziczek added that the UAW failed to win any additional job security measures and failed to achieve one of its primary goals: reopening an assembly plant in Lordstown, Ohio. The union did, however, persuade GM to reverse plans to close its Detroit-Hamtramck plant, which had been scheduled to close in January. GM plans to invest $3bn in overhauling that plant.

“They [the UAW] got a pretty hefty contract,” Dziczek said. “I don’t think it will discourage strikes.”

More Americans engaged in work stoppages last year than in any year since 1986 – 485,000 workers participated in strikes or other work stoppages. That surge of collective action continue this year.

In addition to the GM strike – the longest nationwide strike against GM since 1970 – there has been a week-long strike by 30,000 Los Angeles school teachers last January, an 11-day walkout by 31,000 Stop & Shop grocery workers in in New England in April and the ongoing strike by 25,000 educators in Chicago, now in its second week. And last Friday, 3,500 UAW members ended their 12-day strike against six Mack Truck facilities in three states.

Art Wheaton, an auto industry expert at the Cornell University School of Industrial and Labor Relations, said the huge public support that the GM strikers received will encourage other union leaders to consider walkouts.

“Public support for the UAW from the community was overwhelming – GM vastly underestimated the public support,” Wheaton said. “Whether you want to attribute it to the UAW or the teachers’ strikes, I think we’ll continue to have a lot of strikes as long as the labor market is so tight and the jobless rate is so low. People feel if they go on strike and lose their job, they can at least find another job.” 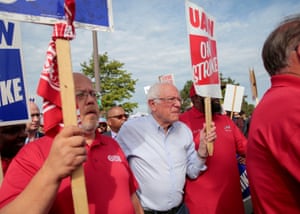 Moreover, with the jobless rate so low, it is harder for corporations to find and hire replacement workers to keep operations running during a strike.

Wheaton said economic anxiety and anger are also fueling the wave of strikes. “There is a lot of frustration out there because many people feel they’re not able to keep up” even 10 years into an economic recovery, Wheaton said. “When CEOs are making 250 to 300 times what the average worker is making, that just adds to the frustration.”

The four-year GM contract calls for raises of 3% in the first and third years and a 4% lump-sum payment in the second and fourth years. UAW members voted 57% to 43% to ratify the contract, indicating that many workers didn’t think the settlement was an out-and-out victory.

“UAW members stood together to win the fair treatment that they’ve earned over years of selfless sacrifice,” said Richard Trumka, the AFL-CIO’s president, referring to the pay freeze and other concessions that GM workers agreed to a decade ago to help lift their company out of bankruptcy reorganization. “This is the latest victory in a wave of collective action happening across America. Working people won’t allow greed to dictate our lives.”

Trumka added: “Bosses everywhere should take note – we’re not going to take it any more.”

John Beck, a professor at Michigan State University’s School of Human Resources and Labor Relations, agreed that the results of the confrontation could spur more strikes, but cautioned about exuberance and overconfidence. “People are seeing that $11,000 signing bonus – that’s fairly stratospheric – and they’re saying, ‘Look, at what they got,’” Beck said. “But who else can actually deliver those kinds of things? And arguably the folks in Lordstown would say this was no victory.”

“I’m worried,” Beck continued, “that many people might believe this some kind of model of resurgence and that labor is so muscular that labor can leverage this kind of outcome for other groups in other locations. I’m not sure what that leverage exists in many other places.”

Arthur Schwartz, president of labor and Economics Associates and a former top negotiator for GM, said: “I don’t think the GM strike will put a damper on things. Other workers might be inspired a bit.” But he added: “There’s never a winner in a strike because everybody suffers. The company lost a lot of money and the workers lost a lot of money.”

By some estimates, the workers lost nearly $1bn in wages while GM said the strike could pull down its earnings by nearly $3bn.

When CEOs are making 250 to 300 times what the average worker is making, that just adds to the frustration

With the GM dispute settled, the UAW will now focus on negotiations with Ford and Fiat Chrysler. Unlike GM, those two companies are not pushing to close plants and thus won’t be under the same pressure GM faced to significantly increase worker pay to help persuade the strikers to accept a contract that included plant closings.

“A strike is very unlikely at Ford,” Cornell’s Wheaton said. “Ford has much better labor-management relations. Ford has been saying, ‘The UAW saved us from bankruptcy.’”

Wheaton said the union’s negotiations with Fiat Chrysler are harder to predict, not least because several of the UAW and Fiat Chrysler negotiators have been convicted or indicted for diverting millions of dollars from a Fiat Chrysler-UAW training center and used that money for travel, expensive dinners, even a sport car. Moreover, Fiat Chrysler has a far higher percentage of second tier workers than GM so Fiat Chrysler might balk if the UAW insists that it adopt the same contract language that lifts all second-tier workers to $32 an hour

Schwartz of Labor and Economics Associates said the Democratic presidential candidates could use the GM strike to political advantage. Many of them joined the strikers on the picket line – they will use that to show they care about blue-collar workers in the midwest. Moreover, Schwartz said, they could attack Donald Trump over the closing of the Lordstown plant because Trump had advised Lordstown-area workers, not to sell their homes, saying that their plant would survive and that all the lost factory jobs in Ohio “are coming back”.