"It's not for ordinary Americans, it's for the rich and powerful, and we have to find a way to stop them. And that's going to be the elections next year," said Sen. Jeff Merkley. 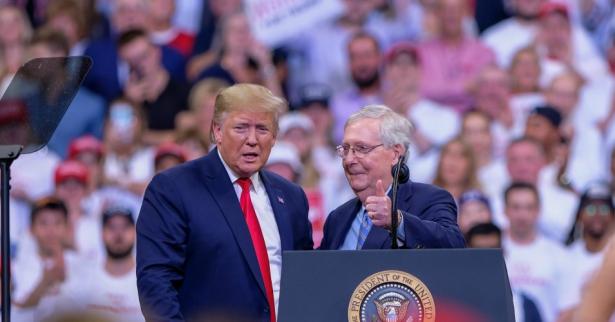 During a rally in Kentucky Monday night ahead of the state's gubernatorial election, Senate Majority Leader Mitch McConnell boasted that he and President Donald Trump are "changing the federal courts forever" by rapidly confirming right-wing judges to lifetime seats.

"Nobody has done more to change the court system in the history of our country than Donald Trump," McConnell, a Republican from Kentucky, said while flanked by Trump. "And Mr. President, we're going to keep on doing it. My motto is: Leave no vacancy behind."

Civil rights groups and lawmakers acknowledged—with horror—the truth of McConnell's remarks, which come as Senate Republicans are working to rush through another batch of Trump's extreme right-wing judicial picks.

The president, in partnership with McConnell, has successfully appointed 150 federal judges and, as the New York Times reported, "a quarter of the nation's 179 appeals court judges" will soon be Trump appointees.

"It's not for ordinary Americans, it's for the rich and powerful, and we have to find a way to stop them. And that's going to be the elections next year."
—Sen. Jeff Merkley

"The Trump-McConnell attempt to take over our judiciary has been an astonishing attack on civil rights," the Leadership Conference on Civil and Human Rights tweeted in response to McConnell's comments. "But remember: Every single nomination counts. If we stop one anti-civil rights judge, thousands of people could be treated more fairly—for decades."

In an interview with MSNBC's Chris Hayes Monday night, Sen. Jeff Merkley (D-Ore.) agreed that Trump and McConnell are "reshaping the judiciary."

McConnell's rapid confirmation of Trump's often unqualified judicial picks has frequently flown under the radar of national news coverage, but advocacy groups have warned that the ongoing takeover of the nation's federal courts poses a dire threat to decades of progress on civil rights, LGBTQ protections, reproductive rights, and much more.

"Every network should be covering this," the Leadership Conference said in September after McConnell rammed through four more lifetime judges. "Trump's dangerous takeover of our courts will last a generation. All who care about our civil rights being protected must speak out and demand better."

"In case you're wondering what Senate Majority Leader McConnell is doing while he buries civil rights bills in his legislative graveyard, this is it," said Leadership Conference president Vanita Gupta.