Senior state department official George Kent says the president had a very specific demand for his Ukrainian counterpart, to be delivered at a press conference 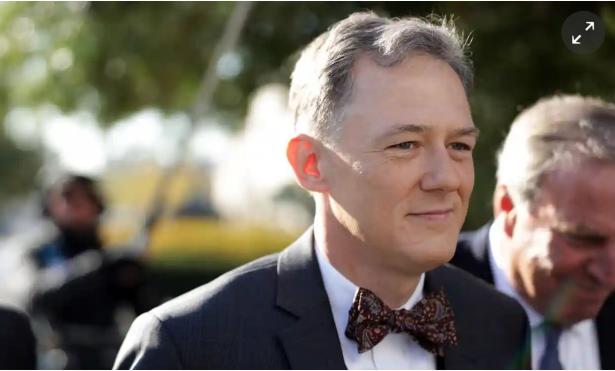 Donald Trump wanted to hear three words out of the Ukrainian president’s mouth, according to newly released testimony in the US impeachment inquiry: “investigations”, “Biden” and “Clinton”.

The Ukrainians had been told that the resumption of $400m in military aid “would likely not occur” until President Volodymyr Zelenskiy made a televised statement, according to previous testimony.

The essential elements of the statement were dictated to diplomats by Trump himself, testified George P Kent, a deputy assistant secretary of state who was in charge of Ukraine policy – until he abruptly was not.

Trump told Zelenskiy on the phone in late July that he wanted him to pursue investigations of his political rival Joe Biden and a 2016 election conspiracy theory, according to a call summary released by the White House.

But by early September, after a creep down what another witness has described as a “continuum” of “insidiousness”, the demand had grown more specific.

Gordon Sondland, the ambassador to the European Union, told fellow diplomats at the time that “he, Gordon, had talked to the President – POTUS in sort of shorthand – and POTUS wanted nothing less than President Zelenskiy to go to a microphone and say ‘investigations’, ‘Biden’, and ‘Clinton’,” Kent testified, according to the new transcripts.

“Clinton” was shorthand for the investigation of a conspiracy theory, credited by Trump, about the 2016 election and his opponent, Hillary Clinton.

Allegations that Trump used the power of his office to solicit foreign interference in the 2020 election are at the heart of the current impeachment inquiry against him.

Thinking the plot was “injurious to the rule of law”, Kent took measures to document conversations and other observations in mid-August, a month after the military aid was suspended, he testified.

“I wrote a note to the file saying that I had concerns that there was an effort to initiate politically motivated prosecutions that were injurious to the rule of law, both Ukraine and the US,” he said.

“I do not believe the US should ask other countries to engage in politically associated investigations and prosecutions,” he continued. “As a general principle, I don’t think that as a matter of policy the US should do that, period.”

Kent, a 27-year veteran of the foreign service, is scheduled to be the second witness to speak in public impeachment hearings to begin next week.

In his closed-door testimony he described his shock at the hijacking of US policy in the region and his alarm to see Marie Yovanovitch, then ambassador to Ukraine, come under attack by “two snake pits” – one in Ukraine and one in the United States.

Yovanovitch, who was recalled in May, fell victim to a runaway plot that began with a former Ukrainian general prosecutor who wanted “revenge” for her anti-corruption efforts in Ukraine, working with Rudy Giuliani, Trump’s personal emissary, Kent testified. The plot grew to take in Donald Trump Jr; Lev Parnas and Igor Fruman, Ukrainian-Americans arrested last month on campaign finance charges; and others, Kent said.

“My reference to the snake pits would have been in the context of having had our ambassador just removed through actions by corrupt Ukrainians in Ukraine as well as private American citizens back here,” Kent explained.

“Mr Giuliani, at that point, had been carrying on a campaign for several months full of lies and incorrect information about Ambassador Yovanovitch, so this was a continuation of his campaign of lies,” Kent said.

Diplomats nevertheless decided to work with Giuliani, the ex-mayor of New York, owing to his link to Trump, Kent said. “It was clear that the former mayor had influence on the President in terms of the way the President thought of Ukraine,” Kent said, quoting America’s special Ukraine envoy, Kurt Volker. “And I think by that moment in time, that was self-evident to anyone who was working on the issues, and therefore, it made sense to try to engage the mayor.”

But as his frustration at what he saw as the subversion of US policy grew, Kent began to take additional counter-action, some of it directed at his boss, the secretary of state, Mike Pompeo.

After Pompeo sent what Kent thought was an inaccurate letter accusing Congress of attempting to bully career foreign service officers, Kent notified top state department lawyers and the director of the foreign service that what Pompeo said was wrong, he said.

“I was one of two career foreign service officers which had received letters from the committees, and I had not felt bullied, threatened, and intimidated,” Kent said.

Supervisors ultimately told Kent to temper his objections to the scrambling of Ukraine policy, he said.

“I was told to keep my head down,” he said, “and lower my profile in Ukraine.”