Asylum: 90% of Claims Fail at First Hurdle after US Process Change, Lawsuit Alleges

Plaintiffs claim under 10% of women and children at a center in Texas pass their initial ‘credible fear’ interview, down from 97% 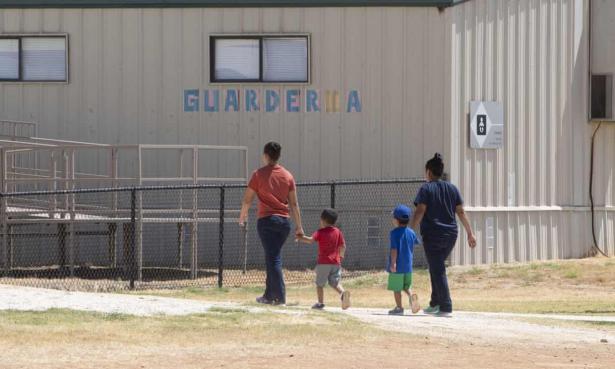 The Dilley detention center in Texas is the largest such facility for families in the country, Photograph: Bob Daemmrich/Zuma Wire/Rex/Shutterstock

The vital first step in the asylum-seeking process has nearly been extinguished at the largest immigrant family detention center in the country, according to a lawsuit.

Plaintiffs allege that since mid-July the number of women and children at Dilley family detention center in Texas who pass the first interview necessary to apply for asylum has dropped from 97% of applicants to fewer than 10%.

This unprecedented drop in approved interviews comes without any public regulations, directives or guidance about changes to what is known as the “credible fear” interview process. Would-be immigrants must pass the credible fear interview to present their asylum case in immigration court.

If they don’t pass the interview, they can be deported in days.

The Dilley Pro Bono project provides legal services to every woman and child at the detention center, which can hold 2,400 people, and raised the alarm about the unusual drop in interview pass rates.

“This seems to be based on secret policies and procedures that have not been made public by the administration,” said Mukherjee, the director of Columbia Law School’s immigrant rights clinic.

Based on what volunteers on the ground have seen at Dilley, attorneys in the lawsuit identified possible regulatory changes to the interview process. For instance, several plaintiffs in the suit said they had been interviewed multiple times, instead of once, forcing them to repeatedly recount traumatic events.

If such changes have been made, the executive branch will have illegally circumvented Congress to do so, according to the lawsuit, which seeks to end the changes to the credible fear process.

A court has temporarily held up deportation of the plaintiffs in the lawsuit, which was filed in September.

Attorneys believe Donald Trump’s administration made secret changes to the credible fear process at the same time it announced it would force people to seek asylum outside the US before they can seek it at the southern border. That 16 July change in effect means the only people who can seek asylum at the border are from Mexico or who have flown into the US without a layover.

Since 1996 the credible fear process has carved out a step to stop people from being deported quickly and instead give them time to prepare a case to make an asylum claim.

The threshold for establishing credible fear is relatively low because Congress wrote the regulation to protect bona fide asylum seekers and allow them the time to prepare their often complex and difficult cases.

Amanda Holpuch is a reporter for Guardian US, based in New York. Click here for Amanda's public key. Twitter @holpuch