books Audience of One: Donald Trump, Television, and the Fracturing of America

Looking at the USA through the media mind of the country's ex-reality show star, cable news addicted, twitter-obsessed president. 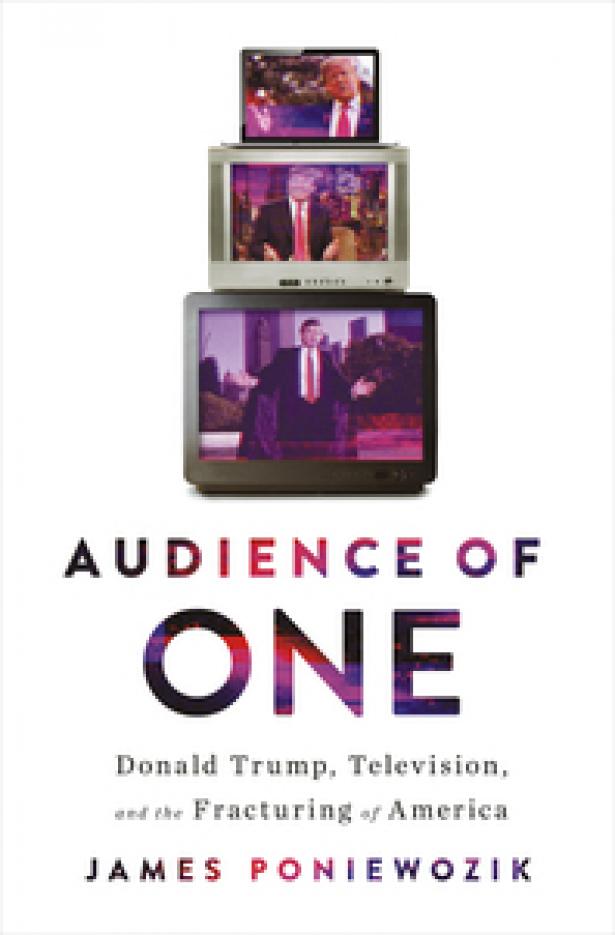 Audience of One
Donald Trump, Television, and the Fracturing of America
James Poniewozik
Liveright
ISBN 9781631494420

New York Times television critic James Poniewozik’s highly readable if disturbing Audience of One analyses the symbiotic relationship between Donald Trump and television over his career as a media figure.

During the decades of Donald Trump’s celebrity, television has moved from three, then four, networks to the hundreds of cable channels. We have moved from a country united by television to a country divided by it. Television also changed in content. Network news was replaced by cable news, which gave us channels that represented different political viewpoints. The country divided into Fox News viewers versus CNN and MSNBC viewers. Trump himself was part of the ascendance of reality television, which rewarded the ruthless contestants who won by any means. At the same time, fictional shows like The Sopranos and Breaking Bad centered on fascinating but morally repugnant male characters.

All of these changes in television have been linked to Donald Trump’s ascendance to the presidency. Trump began being host of NBC’s The Apprentice at a time when his own businesses weren’t doing very well, yet The Apprentice created an image of Trump as a phenomenally successful man who lived in opulent splendor. His entrance down the escalator at Trump Tower to announce his candidacy for the presidency was a repeat of the opening credits of The Apprentice.

Trump’s belief that winning is everything and one does whatever one can to win regardless of principles echoes the ethos of television reality shows. Poniewozik quotes an early People Magazine article in which Trump states that man is the most vicious of animals and life is a series of battles ending in victory or defeat. Being nice or likeable doesn’t make you a winner, nor does playing by the rules. According to Poniewozik, Trump told his staff to think of every day as an episode of a reality show in which they defeated their enemies. In essence, Trump has brought the dog-eat-dog ethos of reality television to American politics.

As people became fascinated with fictional characters like Tony Soprano or Walter White of Breaking Bad, it became possible for Donald Trump to be seen as a complex, fascinating antihero. He convinced many voters that it takes a tough, ruthless guy to do the dirty job of running the country in an ugly, hostile world.

James Poniewozik also discusses Trump’s complex relationship with cable news, particularly Fox News. On one hand, the prime time commentators on Fox News have been Trump’s champions. Conversely, Trump spend hours of each day watching Fox News to see what the commentators are saying about him and adjusting his message and policy accordingly. Fox News may depend on Trump and his supporters, but Trump also depends on Fox News.

Audience of One is a lively, fascinating book that makes a convincing argument; however, it’s not the whole story of Trump’s relationship with the media. Poniewozik does not discuss in depth the crucial importance of the new media to Trump’s success, particularly Trump’s constant use of Twitter (11,000 Tweets since he took office), which nourishes his supporters and feeds the outrage of his opponents. The tweets, more than television, have changed the way presidential power is exercised.

Nor does he emphasize the many extremist websites that provide the conspiracy theories that Trump retweets. Trump has indeed mastered television, but much of America depends for their information on other sources, and Trump clearly has his eyes on some of the darker websites. Nonetheless, Audience of One: Donald Trump, Television, and the Fracturing of America is a must read for those who want to understand the media phenomenon now in the White House.

John Clum is Professor Emeritus of Theater Studies and English at Duke University. He has written books and scholarly essays on modern and contemporary American theater, musical theater, film, and television as well as LGBTQ+ issues. He is also a director and playwright.