labor Arkansas Teachers Went On Strike. Here Are the Corporate School Privatizers They’re Up Against.

Arkansas teachers and students face a well-funded school privatization effort backed by major corporate entities with influence that stretches from the Governor’s office to the state Board of Education to the University of Arkansas. 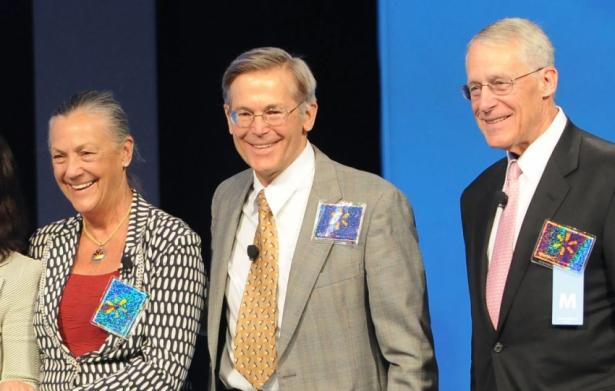 Alice, Jim and Rob Walton in 2011. Their Walton Family Foundation is a top driver of the school privatization agenda in Arkansas,(Image: Walmart Flickr)

Teachers of Little Rock, Arkansas went on strike Thursday over the state’s decision to strip their collective bargaining rights and curtail local control of the school district. It was the teachers’ first strike since 1987, and only their second strike ever.

The teachers are demanding the return of bargaining power from the state. They are also want full local control of the district returned. The state took oversight over Little Rock schools in 2015, claiming low test scores at some schools, and earlier this year sought to create a two-tiered school system that many believe would have, in effect, racially segregated the city’s schools. While that effort by the Board of Education was defeated, it responded by withdrawing recognition of the union. (For further details about the lead-up to the strike and the issues behind it, read Eric Blanc’s helpful column at Jacobin).

Governor Asa Hutchinson has defended the state’s continued takeover of the local school district, and he appointed 8 of the 9 state Board of Education members who voted to end recognition of the teachers’ union. As we discuss below, several of the board members are tied to corporate backers of school privatization in Arkansas.

Like other teachers who have recently struck – from Los Angeles and Chicago to Arizona and West Virginia and beyond – Little Rock’s teachers are pitted against a billionaire-backed school privation agenda that wants to crush collective bargaining rights and advance charter schools. As in those strikes, Little Rock students have the backing of their students, thousands of whom recently staged a “sick out” protest in support of their teachers.

A major backer of the anti-union, pro-charter agenda in Arkansas is the Walton family, whose foundation is a huge funder of the school privatization infrastructure that exists across the state. In addition to the Waltons, corporate elites from Murphy Oil, the Arkansas State Chamber of Commerce, the Arkansas Democrat Gazette and others are backers of the school privatization efforts. These corporate interests are close to Governor Hutchinson, who supports their agenda, and they have close ties to the state Board of Education. In addition, they are also interlocked with a host of lobbyists and academics that push their agenda.

The Walton Family Foundation and the Arkansas “School Privatization Empire”

A major driver of the school privatization agenda in Arkansas is the billionaire Walton family. The Waltons owns WalMart, which is headquartered in Bentonville, Arkansas. As of 2018, the three children of Jim Walton, the late founder of Walmart, were worth a combined $163.2 billion.

The Waltons are major advocates of charter schools nationally, and they carry out their school privatization agenda through their Walton Family Foundation, which showers hundreds of millions on pro-charter groups and schools. The foundation claims it has invested a whopping $407 million into pushing charter schools since 1997. According to a recent report put out by the Arkansas Education Association, the Waltons pump millions into propping up the state’s school privatization infrastructure – or what the report calls the “Arkansas’s School Privatization Empire.”

It’s not just that the Waltons give big money to a few groups – it’s also that these groups then distribute that money to other organizations, lobbyists, consultants, and academics, creating a vast network of billionaire-funded activity to attack unionized teachers and push charter schools.

For example, the Walton family Foundation gave $350,000 to the Arkansans for Education Reform Foundation (AERF) in 2017 – around 80% of all the contributions the organization took in that year.

The AERF board includes other powerful funders and advocates of school privatization in the state, such as Claiborne Deming, the former CEO of Murphy Oil, a big backer of charter schools in Arkansas; William Dillard III, part of the Dilliard family that owns the Dilliard’s department stores; and Walter Hussman, publisher of the Arkansas Democrat-Gazette, the state’s flagship newspaper. Jim Walton is also on the board.

AERF has in turn used the money it receives from the Walton billionaire fortune and other Arkansas elites to fund other school privatization efforts. For example, it gave $115,000 to Arkansas Learns, which describes itself as “the Voice of Business for excellent education options – including industry-relevant career pathways…” The CEO of Arkansas Learns, Gary Newton, is also the Executive Director of the AERF (for which he earned $189,639 in compensation in 2017).

In turn, Arkansas Learns has the same board members as AERF, and Randy Zook, the CEO of the Arkansas Chamber of Commerce, whose wife Dianne Zook is on the state Board of Education that decided to end recognition of the Little Rock teachers’ union, is also a board member. Dianne Zook is also the aunt of Gary Newton.

Together, the Zooks and Newton represent a pro-school privatization power nexus tied to the Governor, Board of Education, the Waltons, the state’s Chamber of Commerce, and the state’s charter school infrastructure, all bound by familial ties.

A whole host of other entities accept corporate money to push the school privatization agenda. These include the lobbyist Laurie Lee and her firm Trace Strategies, which took in $205,756 dollars from AERF in 2016. Lee is the Chairman and CEO of the Reform Alliance, which oversees the state’s voucher program, the “Succeed Scholarship.” Governor Hutchinson has approved $1.8 million in funds for the voucher program, in effect channeling this public money towards the AERF-tied Lee and her Reform Alliance to carry out their charter school agenda.

You can read about more groups tied to the Arkansas school privatization network – such as the Association of American Educators, which received $200,000 from the Walton Family Foundation in 2017 – in the full report put out by the Arkansas Education Association released this summer (the AEA report also states that the Association of American Educators “produces a pro-privatization newsletter” and that its foundation is “an associate of the State Policy Network, alongside the American Legislative Exchange Council,” all tied to the Koch donor network).

Another way the Arkansas corporate-backed charter effort pushes its agenda is through the  University of Arkansas Fayetteville’s Office of Education Reform, which was founded with the help of a $10 million grant from the Waltons. According to the AEA report, it “produces pro privatization policy papers as well as leaders in the privatization movement,” and it’s chaired by Jay Greene, a former fellow with the conservative Manhattan Institute, which is funded by corporations like Exxon, Pfizer, and many others, as well as Walton money.

The University’s Walton-backed Office of Education Reform serves as a pipeline for charter school advocates. For example, Sarah Moore, a graduate of the program, served as Governor Hutchinson’s education policy advisor for three years, and is now a member of the state Board of Education.

Along with the Waltons and their fundees, Walter Hussman, the publisher of the state’s biggest newspaper, the Arkansas Democrat Gazette, is a major backer of school privatization. Hussman is CEO of WEHCO Media and a board member of C-SPAN, the Associated Press, and the American Society of Newspaper Editors. He is also the former chairman of the Greater Little Rock Chamber of Commerce, and the publisher of the Chattanooga Times Free Press.

As the Arkansas State Board of Education, 8 of whose 9 members were appointed by Governor Hutchinson, seeks to bust the Little Rock teachers union, it’s important to know that several board members are closely tied to the school privatization efforts.

Here’s a slideshow map of the interlocks between the Arkansas State Board of Education and the state’s Chamber of Commerce:

In sum, Arkansas teachers and students face a well-funded school privatization effort backed by major corporate entities with influence that stretches from the Governor’s office to the state Board of Education to the University of Arkansas. As Little Rock teachers strike today, they strike against school privatization and the deepening of school segregation, and they follow in the footsteps of teachers across the country who are standing up to the billionaire class’s attempt to crush teacher unions and push charter schools and the expense of the public good.

This article was originally posted at LittleSis's Eyes on the Ties