White-collar workers share widespread anger at the now-shelved government plan to introduce a law allowing the extradition of criminal suspects to mainland China. 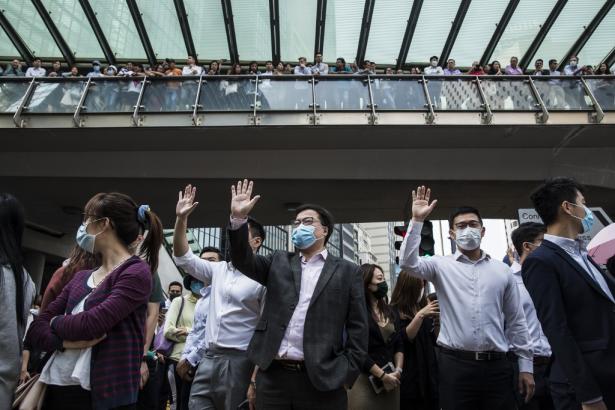 Office workers and protesters gather during a demonstration in Central in Hong Kong on November 14, 2019. , Isaac Lawrence/AFP

Driven by anger at the authorities’ response to massive protests – and guilt that the burden of defending democracy has fallen on the city’s youth – a white-collar rebellion is rippling out across Hong Kong.

Every day this week thousands of office workers have downed tools for a few hours, responding to a call to strike in a cheekily named “Lunch With You” rally.

Faces masked, hands held aloft, many in crisp shirts – some in suits – they chanted pro-democracy slogans and blocked roads in business districts normally characterised by a tunnel-vision for commerce, risking arrest in a rally not sanctioned by police.

On Monday and Tuesday, they crouched under umbrellas, as police lobbed tear gas through Central, the city’s financial heart, clouds drifting across the shopfronts of designer stores.

By Friday, deskbound workers deployed the tactics of street protest – including the swift formation of two lines creating a channel for black-clad “braves” to run through carrying bricks in anticipation of a police crackdown.

“The least we can do is give up our lunchtime to come out and protest the government,” said 33-year-old lawyer Jansen.

The white-collar rebels share widespread anger at the now-shelved government plan to introduce a law allowing the extradition of criminal suspects to mainland China.

Many initially joined the peaceful mega-rallies sanctioned by police against the bill.

Older and employed in city jobs, they mainly identified as “moderates.”

But as time has passed, attitudes have calcified.

Violence against young frontline protesters, a government deaf ear to demands for greater democracy and a lack of police accountability has brought white-collar workers to the streets with renewed conviction.

“We keep going to work every day like nothing is happening, no matter how many students are getting injured. But I can’t bear to go on like this,” said a 26-year-old office worker who gave his surname as Chan.

He was wearing heavy-duty workman’s gloves and helping frontliners build a roadblock in Pedder Street – one of the city’s most exclusive shopping areas and moments from its major banks.

“I’ve always been in the peaceful, rational, non-violent camp. But a lot has changed,” he said.

That has thrown the city’s narrative of free-market success and stability into perspective – more so as the economy has tipped into recession.

“Some values in the community cannot be only measured in terms of money,” said Lawrence, a 32-year-old suited finance professional.

“What I sacrificed can never be compared with those youngsters’ sacrifices,” he said, adding that their “futures” are on the line.

The five-day strike, which saw the city’s transport network targeted by roadblocks and vandalism and brought some of the most violent unrest yet, has stretched Hong Kong police.

It has also prodded rebellion from the greatest beneficiaries of Hong Kong’s once hallowed reputation for peace and stability.

“If you’re violent they say it won’t solve any problems.”