Any presidential candidate who claims to represent workers and marginalized communities, who even nominally opposes U.S. imperialism, should be able to identify a coup as such. 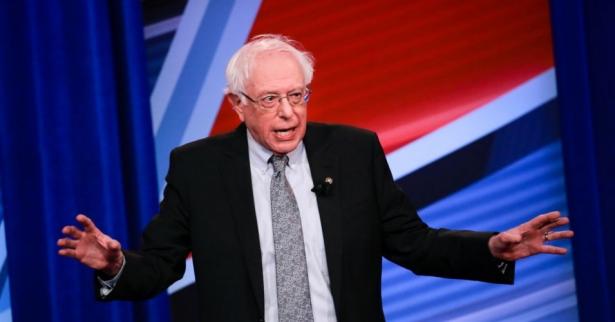 Since Morales’ forced resignation, the response of leading Democrats and presidential hopefuls has been one of almost total silence, even among the party’s putative progressives., CNN

Toward the end of Saturday night’s Democratic forum hosted by the Spanish language network Univision, moderator Jorge Ramos posed what can charitably be called a leading question to 2020 hopeful Bernie Sanders. Ramos, who cemented his place in the public consciousness when then-candidate Donald Trump had him tossed from a news conference in 2015, noted that Sanders had called the overthrow of Bolivian President Evo Morales a “coup,” but that others maintain that Morales was attempting to become a dictator. So what does Sanders think?

In a Democratic field that seems to grow more crowded by the month if not the week, the Vermont senator’s answer was nothing short of revelatory. “I don’t agree with that assertion,” he said. “I think Morales did a very good job in alleviating poverty and giving the indigenous people of Bolivia a voice that they never had before. Now we can argue about his going for a fourth term, whether that was a wise thing to do. … But at the end of the day, it was the military who intervened in that process and asked him to leave. When the military intervenes, Jorge, in my view, that’s called a ‘coup.'”

Since Morales’ forced resignation, the response of leading Democrats and presidential hopefuls has been one of almost total silence, even among the party’s putative progressives. As video emerged of right-wing protesters burning the flag of the indigenous Wiphala and pro-coup police officers gleefully cutting it off their uniforms, Sen. Elizabeth Warren, D-Mass., declined to comment publicly despite the gruesome precedent in the region. (She has since issued a tepid tweet calling on Bolivian security forces to “protect demonstrators, not commit violence against them.”) The same can be said of Rep. Tulsi Gabbard, D-Hawaii, who has made opposition to U.S. regime change the centerpiece of her campaign, although her anti-imperialism has always been questionable at best. Chris Murphy, D-Conn., an outspoken critic of the U.S.-backed Saudi war in Yemen, could only muster the following on social media:

The drama isn't just in Washington today. Unrest is growing in Latin America, and the Trump Administration needs to pay attention. In Bolivia, the U.S. needs to support a civilian-led transition of power at a perilous moment. We can't botch this like we did Venezuela.

Given that the U.S. has repeatedly backed coup attempts in Venezuela, most recently throwing its support behind President of the National Assembly Juan Guaidó, the last line of that tweet seems confusing at best and ominous at worst. What, after all, is the United States’ to botch? By contrast, British Labour leader Jeremy Corbyn instantly condemned Morales’ removal from office as an assault on “democracy, social justice and independence.” Both Trump and Prime Minister Boris Jonson have officially recognized Bolivia’s interim government.

In the week since, the crisis in Bolivia has grown increasingly deadly. The Bolivian military has slaughtered dozens of demonstrators, and over the past two days, hand-picked president, Jeanine Áñez, has issued a pair of disturbing edicts. The first is that the Bolivian military will not be prosecuted for crimes committed in the suppression of protests, providing it with what members of the socialist MAS party are calling a “license to kill”; the second is the creation of a “special government apparatus” to detain MAS lawmakers, who constitute a two-thirds majority in the Bolivian legislature. Meanwhile, Argentinian journalists have been chased from the country under the threat of violence.

Ánez, whose deceptively named Democratic Social Movement Party won just 4.2% of the vote in the October elections, has called a New Year’s celebration of the Aymara people “satanic” and has referred to Morales as a “pobre indio” (a poor Indian). Upon assuming office, she declared that “La Biblia vuelve al palacio” (“the Bible has returned to the presidential palace”), bearing an oversized scripture to re-enforce the point. The New York Times notes that she has made her speeches “shadowed by an aide carrying a cross.”

None of this absolves Morales of his apparent illiberalism or real missteps in office. As his critics in Western media eagerly observe, he narrowly lost a 2016 referendum to determine his eligibility for a fourth term, receiving approval instead from his country’s Supreme Court. Along similar lines, the U.S.-backed Organization of American States has reported irregularities in 2019’s presidential elections, although those remain in dispute. As “Empire’s Workshop” author and Latin American historian Greg Grandin recently wrote, “there has never been a coup in Latin America where the president being overthrown wasn’t considered ‘problematic.’ (Yes, not even [Salvador] Allende.)” Indeed, The Economist blamed the Chilean president directly for Augusto Pinochet’s seizure of power in 1973.

It seems telling, then, that the military asked Morales to resign after he agreed—likely under duress—to a second election. And while the current Secretary General of OAS Luis Almagro will not, former Secretary General José Miguel Insulza has said that Bolivia’s democratic interregnum meets the political definition of “un golpe” (a coup).

So why can’t Democrats do the same? Whether the Trump administration is directly responsible for Morales’ overthrow or the U.S. is merely the passive beneficiary of a new market-friendly and increasingly Christofascist regime is, ultimately, beside the point. (A passing familiarity with Bolivian history or Operation Condor more broadly point to the former, to say nothing of the attempts in Venezuela earlier this year, although I am loath to speculate.) Any presidential candidate who claims to represent workers and marginalized communities, who even nominally opposes U.S. imperialism, should be able to identify a coup as such. If they can’t, why should we trust them to implement a just and holistic foreign policy?

It’s a basic test that the party has, to date, failed miserably—one that not only illuminates the threat Sanders poses to America’s two-party duopoly but renders absurd the notion that he shares the politics of Warren or any other 2020 contender.

Jacob Sugarman is the acting managing editor at Truthdig. He is a graduate of the Arthur L. Carter Institute of Journalism whose writing has appeared in Salon, AlterNet and Tablet, among other publications.