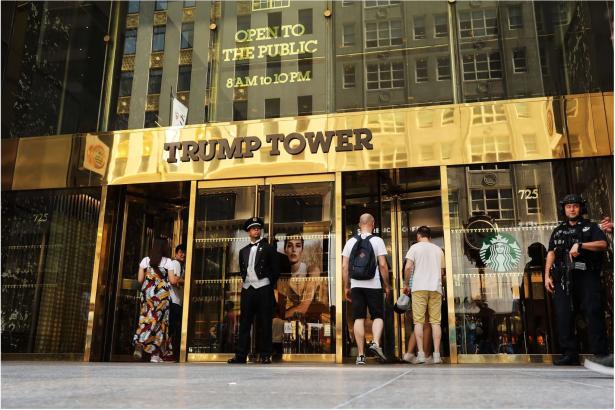 Donald Trump’s business reported conflicting information about a key metric to New York City property tax officials and a lender who arranged financing for his signature building, Trump Tower in Manhattan, according to tax and loan documents obtained by ProPublica. The findings add a third major Trump property to two for which ProPublica revealed similar discrepancies last month.

In the latest case, the occupancy rate of the Trump Tower’s commercial space was listed, over three consecutive years, as 11, 16 and 16 percentage points higher in filings to a lender than in reports to city tax officials, records show.

For example, as of December 2011 and June 2012, respectively, Trump’s business told the lender that 99% and 98.7% of the tower’s commercial space was occupied, according to a prospectus for the loan. The figures were taken from “borrower financials,” the prospectus stated.

In tax filings, however, Trump’s business said the building’s occupancy was 83% in January 2012 and the same a year later. The 16 percentage point gap between the loan and tax filings is a “very significant difference,” said Susan Mancuso, an attorney who specializes in New York property tax.

A spokesperson for the Trump Organization said that “comparing the various reports is comparing apples to oranges” because reporting requirements differ.

Trump had much to gain by showing a high occupancy rate to lenders in 2012: He refinanced his share of Trump Tower that year and obtained a $100 million loan on favorable terms.

The vast majority of the gap between occupancy figures could be explained by diverging reports on how much space the Trump Organization used in Trump Tower. In loan documents, the company said it and its affiliates occupied 74,900 square feet in mid-2012, or 31% of the building. But tax reports from the January before and after listed the company and related parties as occupying 41,600 square feet — or about 18% of the tower.

“I cannot give you an explanation,” said Kevin Riordan, a financing expert, former accountant and real estate professor at Montclair State University who reviewed the tax and loan records for Trump Tower at ProPublica’s request.

More than a dozen tax and finance experts, presented with ProPublica’s earlier findings, also said they could not decipher a reason for the differences. As with Trump Tower, the discrepancies made the two properties — a skyscraper located at 40 Wall Street and the Trump International Hotel and Tower near Columbus Circle — appear more profitable to the lender and less so to property tax officials.

Those discrepancies were “versions of fraud,” according to Nancy Wallace, a professor of finance and real estate at the Haas School of Business at the University of California-Berkeley. The penalties for false filings can include fines or criminal charges.

Get ProPublica's Top Investigations
Subscribe to the Big Story newsletter.

The diverging numbers match a pattern described by Michael Cohen, Trump’s former lawyer, in congressional testimony this year. Cohen said Trump at times inflated assets’ value in documents submitted to lenders in an effort to secure loans. In reports to tax officials, Cohen testified, Trump would lower the value to reduce what he owed.

The focus on Trump’s business and personal financial records has been particularly intense of late. Manhattan District Attorney Cyrus Vance Jr. has subpoenaed a wide array of Trump financial records to investigate claims that the Trump Organization falsified records of hush-money payments to pornographic film actress Stormy Daniels, who said she and Trump had a sexual encounter. (He has denied the affair.)

Congressional lawmakers are seeking Trump’s personal tax returns, as well as other financial information, as part of their investigation into potential foreign influence on the presidency. Two federal courts have affirmed lawmakers’ right to enforce the subpoenas, and Trump has appealed to the U.S. Supreme Court.

ProPublica used New York’s Freedom of Information Law to obtain property tax filings for four of Trump’s Manhattan buildings, including Trump Tower. The income and expense statements Trump filed when repeatedly appealing the city’s valuation of his property are public under the law. We then compared information in the tax reports to loan data made public when Trump’s debt became part of pools of loans sold publicly as bonds known as commercial mortgage-backed securities.

Information in tax and loan filings can differ for legitimate reasons, experts said. A small portion of the occupancy gap at Trump Tower did appear to have an explanation: About 2.5 percentage points of the discrepancy in 2012 consisted of an instance where the Trump Organization treated newly leased, but still empty, space as full in its loan documents (which Trump’s lender disclosed) but not in tax documents.

The Trump Organization refinanced Trump Tower in 2012, replacing its existing $27 million in debt with a loan for $100 million. That allowed Trump to extract about $68 million in cash. The same institution that handled the refinancing, Ladder Capital, refinanced 40 Wall Street and the Columbus Circle property a few years later. 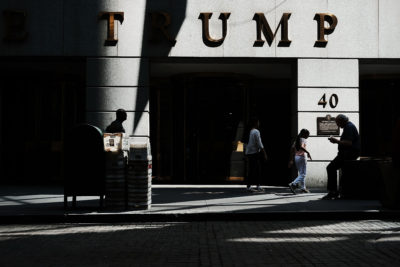 The president’s businesses made themselves appear more profitable to lenders and less profitable to tax officials. One expert calls the differing numbers “versions of fraud.”

Occupancy, along with cash flow, is a factor used by lenders and ratings agencies to assess the riskiness of a loan. Trump secured relatively favorable terms: an interest-only loan that allowed him to avoid paying monthly principal. The Trump Tower loan received coveted AAA and Aaa ratings, respectively, from credit agencies Fitch and Moody’s. (The company has continued making payments.)

When it comes to reporting property taxes in New York City, there’s a potential incentive for owners to minimize how much space they’re renting to themselves. The city’s Tax Commission, which handles property tax appeals, tends to treat owner-occupied space as if it’s being rented at full market price, which increases the value the tax commission assigns to the building, and thus increases the tax bill. But the commission often won’t assign such income to vacant space, said Mancuso, the New York property tax expert.

The Trump Tower filings showed smaller discrepancies when it came to income. (New York City assessors consider income when calculating the taxable value of commercial properties, making New York property tax filings resemble those of income taxes more than property tax filings typically do in other parts of the country.)

Trump Tower, however, fell shy of expectations for profit set out by underwriters working for Ladder Capital during the refinancing, tax and loan records show. They had pegged net operating income at roughly $20.4 million a year. In the years after the loan was made, the building hasn’t come close.

New York City real estate observers have suggested that the tight security needed at the tower because of the presidency has cut into Trump’s ability to make money from the building. This year, China’s biggest bank, Industrial & Commercial Bank of China, made plans to reduce its space in Trump Tower when its lease ran out, according to Bloomberg News.

The financial institution that arranged the Trump Tower refinancing, Ladder Capital, is a publicly traded real estate investment trust that reports more than $6 billion in assets. It has a close Trump connection: Jack Weisselberg, an executive in loan origination, is the son of the Trump Organization’s longtime chief financial officer, Allen Weisselberg. Allen Weisselberg is under investigation by the Manhattan DA for his role in the Daniels payments.

Heather Vogell is a reporter at ProPublica. She is currently investigating President Trump’s business entanglements and collaborating with reporters at WNYC on the podcast, “Trump, Inc.”

Her stories have exposed abuse at group homes for the developmentally disabled and high schools that push out low-achievers to goose their graduation rates. Previously, she was a reporter at The Atlanta Journal-Constitution, where her work on test cheating in the public school system resulted in the indictments of the superintendent and 34 others.

A series she co-authored, “Cheating Our Children,” examined suspicious test scores in public schools across the nation, becoming a 2013 finalist for the Goldsmith Prize for Investigative Reporting. She has also received a Sigma Delta Chi award for Non-Deadline Reporting, the Hillman Prize and multiple Education Writers Association awards for her investigative work.

Before the Journal-Constitution, she worked at The Charlotte Observer, The Chicago Tribune, and The Day, in New London, Connecticut.

You can always email us at tips@trumpincpodcast.org.

And finally, you can use the Postal Service: