A Hidden Ingredient in Chicago’s Gun Violence: The Lack of Housing Options for At-Risk Young Men

"Wherever there is homelessness and housing insecurity, there is violence. So I think anybody who is concerned about crime in a city like Chicago should look at homelessness as a contributing factor." 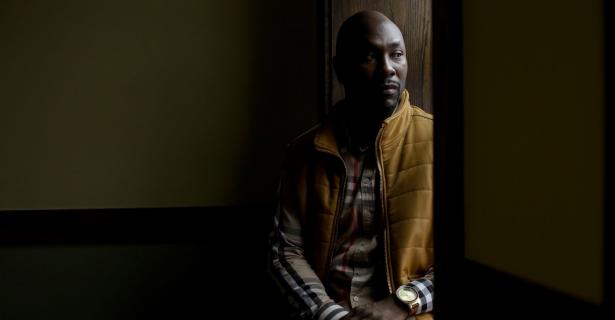 On a cloudy day this past May, Reality Allah walked down Martin Luther King Drive on Chicago’s South Side looking for homeless people.

It was his 44th birthday and he had taken the day off to do community work, distributing $500 worth of chips, deodorant, and hand sanitizer to those in need.

In front of a red brick apartment building in the Washington Park neighborhood, Allah offered a packed Ziploc bag to an older man in a flannel shirt and jeans.

“Where you staying?” Allah asked him.

“That’s what I’m trying to figure out,” replied the man.

As an outreach worker at the anti-violence program READI, Allah has grown used to hearing that answer. READI, which stands for Rapid Employment and Development Initiative, is a two-year program that works with the Chicago men most likely to be shot or to shoot someone and provides them with temporary employment, cognitive behavioral therapy, and social services. Finding housing has become a focus of Allah’s work at the organization. Fourteen percent of the 556 men the program serves are homeless or at risk of homelessness when they begin the program. Some of them are living in cars or sleeping on couches in different friends’ houses each night.

“We know that wherever there is homelessness and housing insecurity, there is violence,” says Allah. “So I think anybody who is concerned about crime in a city like Chicago should look at homelessness as a contributing factor.”

In Chicago, anti-violence organizations like READI are increasingly becoming aware of the importance of housing when working with those most impacted by shootings.

While homeless Chicagoans are spread across the city, both poverty and evictions — two factors that can lead to housing insecurity — are prominent in the Chicago neighborhoods that are most affected by gun violence.

An analysis by The Trace found that people who live in the Chicago communities with the highest homicide rates are nearly three times more likely to be expelled from their house or apartment by landlords than those living in the city’s safest neighborhoods, according to the most recent data available.

Both gun violence victims and perpetrators face many obstacles to finding stable housing, including criminal records. A 2017 report by the University of Chicago’s Crime Lab found that 80 percent of the city’s homicide victims and 90 percent of people arrested for shootings had at least one arrest on their record.

Those criminal records can make it difficult for people to find and keep housing. Landlords in Illinois are legally allowed to reject rental applications from people solely based on arrest records. That means that even people who have never been convicted of a crime can be boxed out.

Public housing, too, may not be an option for people with certain convictions. While federal law does not ban individuals with a history of violent criminal activity from public housing, local authorities have the discretion to reject such admissions. The Chicago Housing Authority currently denies public housing and Housing Choice Voucher applications from households that include a member with a violent criminal history from the past three years, whether that person was arrested for or convicted of the crime. It also denies applications from households that include a member who has served time for a violent crime within the last three years. If someone who lives in public housing or an HCV unit tries to put up a relative who recently returned from prison or was arrested for a violent crime, they can be evicted.

But there’s an even more pressing obstacle to finding housing for people returning from prison, says King Harris, the board chairman of the Illinois Housing Development Authority.

“Even if there were no barriers to renting to people who have had felonies or convictions, you still need money to rent,” says Harris. Rental application fees and security deposits can be far out of reach for someone coming out of prison or jail with little money at their disposal.

Left without many good options, people who come out of jail or prison and end up homeless may help fuel gun violence in the neighborhoods they return to, Harris says. “I leave the Department of Corrections and I walk out the door and I have barely enough bus money to go somewhere. I have no money and no place to live. I may be out on the street. Do I therefore have an incentive to get a gun and commit a crime?” asks Harris, who also serves as a senior fellow at the Metropolitan Planning Council. “Logically, I think you would say yeah.”

Allah says that he recognizes that pattern in the young men he encounters through READI.

“They are exposed to the elements, they are not inside a house being protected. They want to find a gun before a bus pass,” says Allah. “They want to find a way to protect themselves because they have been forced to live in the elements. And so when they find a gun, that’s what leads to — especially in people that don’t have any conflict resolution skills — it leads to violence.”

Allah thinks the solution for the young men he works with is to give them conflict resolution skills and also connect them to potential housing. READI provides a salary to the young men in the program for 18 months and that, along with Allah’s advocacy, has proven useful in convincing at least one private landlord to rent to READI participants. He and the other READI staff are now looking for ways to connect more men to stable housing.

“We have to really be able to attack this issue because it’s a part of our larger goal of reducing gun violence,” Allah adds.

READI’s parent organization, Heartland Alliance, has been advocating for changes in the law regulating rental applications. And they and other organizations have had some success.

In September, Illinois Governor J.B. Pritzker signed a bill into law that will make it a civil rights violation for private landlords to consider a person’s arrest, juvenile, sealed, or expunged criminal records when making rental decisions starting in January 2020. The Chicago Housing Authority, however, says they have no plans to change their rules as they relate to criminal histories.

The issues of unstable housing and gun violence must be tackled together, says Daniel Cooper, author of “The War on Neighborhoods: Policing, Prison, and Punishment in a Divided City.”

“You can’t just re-sort population across a whole region so there’s equitable access to opportunity,” says Cooper. “A lot of people don’t want to leave their neighborhoods and there are a lot of assets and positives there you can build on. So for me the answer is just finding more revenue streams that can be reinvested back into areas that have been ruined by violence, incarceration, and policy failure.”

Cooper is optimistic about the recent marijuana legislation in Illinois, which will distribute 25% of all taxes from the drug once sales become legal in 2020 to grants in the neighborhoods most impacted by violence and poverty, and says more examples of creative funding are necessary.

Until such legislative changes go into effect, however, anti-violence groups in Chicago are trying new ways to address housing troubles, including offering help directly to the men most at risk of violence.

The Maafa Redemption Project on the West Side of Chicago is one of only two organizations in the city that runs dormitories for men at risk of gun violence and being incarcerated. Since 2017, the faith-based residential institute in the West Garfield Park neighborhood has been offering its participants housing, GED classes, access to social services, and full-time, paid employment in construction for nine months.

For 23-year-old Shamont Slaughter, having secure housing made all the difference.

Starting at age 13, Slaughter had been living on the street. He began selling drugs with friends, and they would stay up all night hustling and sleep during the day.

In July 2013, he lost his cousin to gun violence on the South Side. Then, less than a year later, in April 2014, his younger brother was shot and killed on the North Side. Not long after, Slaughter was arrested for drug and gun charges. At just 18 years old, he was sent to prison to serve three years.

When he left prison in 2017, Slaughter returned to the West Side, where he says the streets were calling to him. But a chance run-in with an old friend connected him to the housing and help he needed.“I was going to go on the block to go hustle, and one of my homies saw me,” Slaughter says. “I told him what I was doing, and he said I need you to come talk to these people.”

“These people” were the staff of the Maafa Redemption Project, and after meeting with them, Slaughter decided to sign up for the program.

“Being in the house made a lot of difference,” Slaughter says. “It kept me out of trouble.”

Slaughter graduated from the program last fall and has since moved in with his girlfriend. The couple recently had a baby boy. While the threat of gun violence hasn’t entirely disappeared, Slaughter says that things are looking up for him and his family.

“I haven’t been locked up going on three years and I have been working on a job,” he says. “Maafa helped me graduate from high school. They helped me a lot.”

Nissa Rhee is an award-winning independent journalist who lives in Chicago.