The Rap Brown Law is based on the idea that one person, crossing a state line with the intent to participate in mischief, ought to be prosecuted based on his or her writings or speech, duly intercepted, or by the compelled testimony of his comrades. 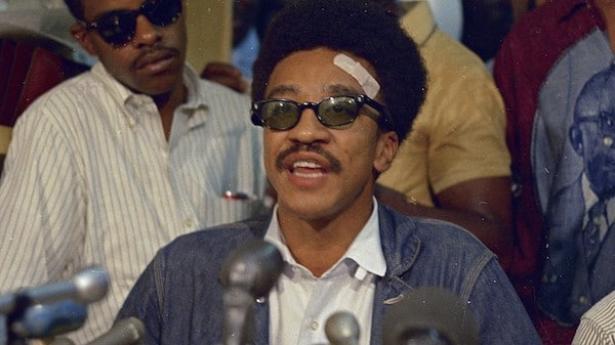 A right-wing publication quotes sources from the Department that calls itself Justice. The “Rap Brown Law” will probably be used against anti-fascist activists. Well, this brings back memories: this was the “law” on which the Chicago 8 and Seattle 8 trials of 1969 were based.

The “Law” was part of the Civil Rights Act of 1968. Other parts of that Act outlawed, among other things, discrimination in housing. But in 1968, the imperial state was worried about other matters as well. The law was popularly named for African-American leader H. “Rap” Brown; its formal title was “The Civil Obedience Act of 1968.”

Student activists at Berkeley, Columbia, and elsewhere had shown their power. Fighters against racism had grown weary of slow uncertain progress in the courts. They sat-in, marched, boarded segregated buses and trains and in their thousands confronted injustice. Resistance to the Vietnam War was so powerful that the government undertook a two-front offensive. On January 5, 1968, a federal grand jury indicted Dr. Benjamin Spock and four other activists for conspiracy to obstruct the draft and to encourage registrants to turn in or destroy their draft cards.

At least Dr. Spock and friends were getting a judicial trial. Selective Service System Director General Hershey issued regulations that any draft registrant who defaced or destroyed his draft card would be summarily ordered to report for induction into the armed forces. Thousands of young men had refused those orders and faced prison, until the Supreme Court held that the procedure was unlawful.

As Mark Jay noted in the December 2019 Monthly Review, this was the historical moment that marks the growth in U.S prison populations from 800.000 to more than seven million. And, lest we forget, the FBI was operating COINTELPRO (“Counter Intelligence Program”), which was, as Wikipedia notes, a series of covert FBI projects aimed at surveilling, infiltrating, and disrupting domestic political organizations.

Also in 1968, the Crime Control Act gave government expanded power to conduct electronic surveillance and to convene special grand juries. Activists were haled before these bodies and when they refused to testify, jailed for long periods without trial in an effort to coerce their cooperation. The expanded surveillance authorized by the 1968 Act was not enough for the state apparatus. Warrantless surveillance of dissident individual and organizations was widespread.

One should note that Dr. Spock’s conviction was reversed on first amendment grounds. The use of electronic surveillance as a basis for grand jury questioning was sharply curtailed by the Supreme Court. And, the Supreme Court held that warrantless domestic national security electronic surveillance violates the Fourth Amendment. But the Rap Brown Law has so far survived constitutional challenges. The Chicago 8 case convictions were reversed on other grounds.

The “Law”, 18 U.S.C. §2101, makes it a crime (among other things) to travel in interstate commerce with intent to participate in a riot, provided that during or after one’s travel, one commits any “overt act” in furtherance of the forbidden intent. (The overt act need not be unlawful.). This is a remarkable indication of just how worried the imperial state had become in 1968.  By way of contrast, consider the offense of conspiracy: two or more persons agree that they will commit an unlawful act, and (under the federal conspiracy statute) one of them commits an overt act in furtherance of the agreement. (Again, the overt act need not be unlawful.). The purported justification for punishing conspiracy is that when two or more people agree to commit a crime, their joint undertaking creates an enhanced risk of social harm. Most civil law countries don’t have all-purpose conspiracy statutes.

The Rap Brown Law is based on the idea that just one person, crossing a state line with the intent to do or participate in mischief, is dangerous enough that he or she ought to be prosecuted. And how will the state know of this forbidden intent: by his or her writings or speech, duly intercepted, or by the compelled testimony of his erstwhile comrades. One is reminded that in the bad old days in England, it was a crime to “compass,” that is to imagine, the death of the monarch.

Given that this thought crime can be committed by one person all alone, we observe the naming tradition that gave us “Chicago 8,” “Seattle 8,” and “Charleston 5,” with—perhaps—the “New Jersey One.”

How then to minimize risk in these times, when confronting neo-Nazis and other fascists has become almost a duty? If you live in New Jersey, and want to go to a gathering in New York, take out your smartphone as the train enters the tunnel under the Hudson and record a memo: “I am crossing into New York now, and I have no intention of participating in any political activity,” or send an email to that effect to a friend. After you get to Penn Station, record again: “I am in New York now, and suddenly and unexpectedly I have this desire to go to a political gathering.” No guarantees of course, but this might help.

Michael E. Tigar is Emeritus Professor of Law at Duke University and Emeritus Professor of Law at Washington College of Law. He has been a lawyer working on social change issues for many years. His books include Law and the Rise of Capitalism (Monthly Review Press, second edition, 2000), Fighting Injustice (ABA Press, 2002), and Thinking About Terrorism: The Threat to Civil Liberties in Times of National Emergency (ABA Press, 2007).

Monthly Review began publication in New York City in May 1949. The first issue featured the lead article “Why Socialism?” by Albert Einstein. From the beginning, Monthly Review spoke for a critical but spirited socialism, independent of any political organization. In an era of Cold War repression, the magazine published pioneering analyses of political economy, imperialism, and Third World struggles, drawing on the rich legacy of Marxist thought without being bound to any narrow view or party line. The McCarthy-led inquisition targeted MR‘s original editors, Paul Sweezy and Leo Huberman, who fought back successfully. Against these odds, the magazine’s readership and influence grew steadily, and in 1952, Monthly Review Press published its first title, I. F. Stone’s Hidden History of the Korean War.

Revenues from subscriptions and book sales have always fallen short of the demands on MR‘s resources. The contributions and gifts of a global community of several thousand people sustain MR. Today the magazine makes all new articles available for free online, and MR Online attracts a substantial and growing readership. If you have found our website of value, please consider subscribing to the magazine or, better yet, becoming an Associate.