Amidst the Climate Emergency Nature is Still Revealing Its Secrets

The Royal Botanic Gardens, Kew highlights the top 10 amazing discoveries from the new plants and fungi found by the institution and its partners in 2019. Many are at risk of extinction from deforestation, agriculture and energy development. 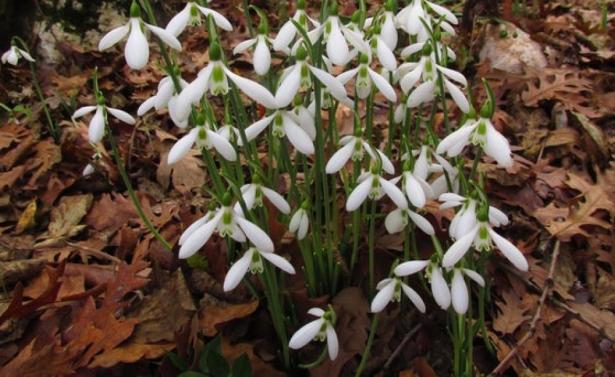 The Snowdrop, (or Galanthus from the Greek gála "milk", ánthos "flower"), a bulbous perennial plant of approximately 20 species in the Amaryllidaceae family. , Dr. Dimitri Zubov

The United Kingdom’s Royal Botanic Gardens at Kew in southwest London is an internationally important botanical research and education institution and a UNESCO World Heritage Site. According to its website: “Biodiversity loss, climate change, rapidly-spreading pests and diseases combined with a soaring human population and fragile food security are negatively impacting communities around the world. Plants and fungi hold the key to solving some of these challenges. Whether as medicines, food, materials or fundamental members of ecosystems, they harbor secrets that could benefit us all.”

A new snowdrop discovered from holiday snaps on social media and a "miracle berry" that alters your taste buds are among the plant and fungi species discovered this year.

The Royal Botanic Gardens, Kew is highlighting the top 10 weird and wonderful discoveries from 102 species of plant and eight new fungi found by the institution and its partners in 2019.

The discoveries include species which could help develop new medicines, or become fresh favourites for plant lovers - but many are already at risk of extinction from deforestation, agriculture and energy developments, experts at Kew said.

Also among the top 10 new finds are an "orchid" found in a waterfall which could be wiped out by a hydroelectric dam, a medicinal fungus growing on bamboo, and an orange bloom named after the wife of the botanist who discovered it.

Dr. Martin Cheek, Kew botanist and senior scientist at the Kew science identification and naming department, said: "Discovering and describing new species is a truly exciting and vital scientific endeavour so we can better protect new species before they become extinct.

"It also helps us to understand their potential uses, and how they might provide the solutions to help us tackle some of the critical challenges facing humanity today.

"This year's selection represents a range of new-to-science plants and fungi that are unique and characterful, yet threatened by human interventions and at risk of becoming extinct soon; something that makes us both concerned and passionate about their protection."

The top 10 highlights of the discoveries made in the world of plants and fungi this year are:

- A new snowdrop (Galanthus bursanus) from north west Turkey was discovered when a Turkish paediatrician uploaded her holiday photos to Facebook, where the plant was spotted by a Ukrainian snowdrop specialist, Dr. Dimitri Zubov.

It has already been assessed as "critically endangered" due to threats from illegal collecting, marble quarrying, climate change and expansion of agricultural land.

- A new species of "miracle-berry" (Synsepalum chimanimani) was discovered in the lowland rainforests of the Chimanimani Mountains on the Mozambique-Zimbabwe border, whose fruits are slightly sweet to taste, but contain a compound called miraculin that blocks taste buds, so when sour foods are eaten, such as limes, they taste sweet.

The new species has been assessed as "endangered" as it is only known in three locations, all of which are under threat from deforestation for agriculture.

- A species from the family known as the "orchids of the falls" (Inversodicraea koukoutamba) was discovered on a waterfall on the Bafing River in Guinea, West Africa.

It is a rubbery seaweed shrub which grows to 20cm tall, but Kew scientists expect it to become globally extinct when construction on a planned hydroelectric project in the area begins next year.

- A medicinal fungus known in China for more than 400 years, "Zhuhongjun", has been discovered to be a genus as well as a species previously unknown to science, and has now been formally named Rubroshiraia bambusae.

It grows in Yunnan in south west China, forming pink, ball-like fruiting bodies on a species of bamboo.

It is used in traditional medicine for arthritis and infant seizures, but it is also of growing scientific interest due to the presence of hypocrellins, compounds with light-induced anti-tumor, anti-fungal and anti-viral activities and potential for antimicrobial use.

- There were 10 new species of bear's breeches plants found in tropical Africa, including two showy blue-flowered species of barleria found in Angola: Barleria deserticola and Barleria namba - one of which was refound in 2017, 160 years after it was first collected by explorer Friedrich Welwitsch, and one which was discovered on the previously unexplored Mount Namba.

- A striking bright pink, candy-striped flower from the African violet family (Cyrtandra vittata) was discovered this year in northern New Guinea. The shrub grows in the rainforest and its white berries are thought likely to be dispersed by doves and pigeons. It was collected under permit and was discovered to be a new species when it bloomed in cultivation.

- There were 11 new species of trees and shrubs from the genus Freziera discovered in the Andean forests in South America this year, some of which could have medicinal value or could make conservatory plants because of their attractive glossy leaves, but all have been assessed as threatened with extinction.

- A perennial herb (Costularia cadetii) which grows on the rims of the volcanoes in Reunion in the Indian Ocean was first collected in 1965 but more material was needed and it was only officially named this year. The species is already classified as endangered as it is restricted to a high elevation habitat that puts it at risk from volcanic activity, fire and climate change.

- A vivid orange flower (Gladiolus mariae) was found growing on a table-stone mountain in Kounounkan, in Guinea, and is restricted to two mountains in the area which are among the last to remain unaffected by humans. The finder, Kew scientist Xander van der Burgt, decided to name it after his wife Maria.

- Zonozono, a 20m tall tree in the ylang-ylang family, has been discovered in Tanzania, but with just seven trees known on Earth, it is very rare and has been assessed as endangered due to the low number of individuals, and threats from pole-cutting and an invasive tree species.

[Emily Beament is the environment correspondent for The Press Association (PA), a multimedia news agency operating in the United Kingdom and Ireland.]