The Apocalypse of Settler Colonialism

In this,his thirtieth book, Horne demonstrates that modernity arrived in the seventeenth century on the three horsemen of the apocalypse: slavery, white supremacy, and capitalism. 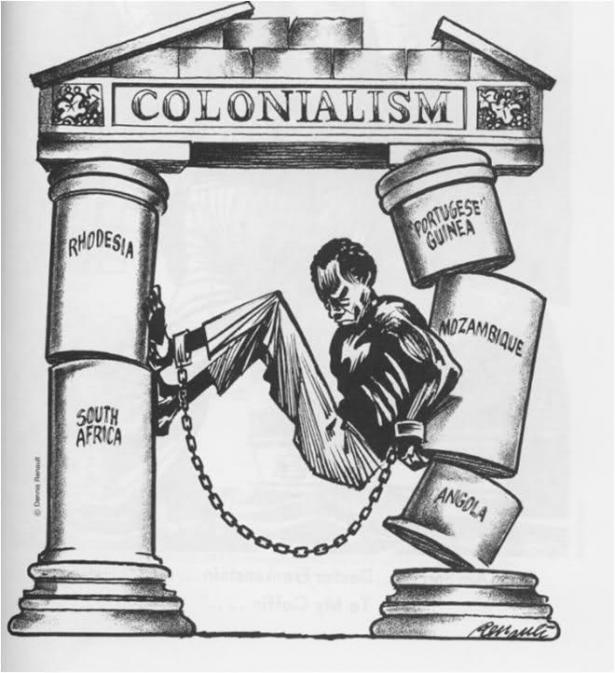 Gerald Horne once again earns his reputation as a nuanced transnational historian of race and class,

In The Apocalypse of Settler Colonialism, Gerald Horne once again earns his reputation as a nuanced transnational historian of race and class. In this, his thirtieth book, Horne demonstrates that modernity arrived in the seventeenth century on the three horsemen of the apocalypse: slavery, white supremacy, and capitalism. Through a focus on English colonial projects, Horne proves these phenomena to be inseparable and interlocking, rather than, for instance, separate pillars of a single structure. Horne’s deft archival work reveals rebellion to be a powerful and primary historical force, and clarifies whiteness as a category of convenience used to quell the vibrant cross-class and cross-racial revolutions which erupted throughout the seventeenth century—from England to Jamaica, Barbados to Boston—rebellions that reverberated through the formation of the United States forward to this day. In Horne’s adroit analysis, seventeenth-century merchant class revolts against the monarchy, long thought to be paeans to democracy and liberalism, are shown to be inextricable from the violent enslavement of Africans and Native Americans. For example, Horne shows how the American revolution of 1776, often understood as a liberal democratic rebellion, was less laudable: a merchant class of capitalists used the “democratic” spread of white supremacy to wrest wealth from a divinely ordained monarchy’s monopoly on slavery. White supremacy, as Horne’s historical research shows, is a tool of capital accumulation. Whiteness was used to justify the opening up of slave markets, the accelerated brutality of colonial and settler colonial genocide and extraction economies, and the solidification of a categorical Other underwriting the war logic that continues to define modernity. The Apocalypse of Settler Colonialism makes essential interventions into existing scholarship on the history of racial formation, the emergence of liberal democracy, and the transnational dynamics of settler capitalism.

In its attention to the conditions of crisis within seventeenth-century colonial projects, this book importantly backdates scholarship documenting the relationships between capital, class, and racial categories. Horne’s text traces a transnational and early history that Nell Irvin Painter takes up in the centuries that follow in her predominately American-focused The History of White People. Horne reveals the seventeenth century as an era where the preconditions for what Painter details are transnational. He establishes white supremacy (“often disguised in deceptive ‘non-racial’ words”) as an essential handmaiden to mercantile capitalism that crossed oceans, national boundaries, and political commitments (Horne 135). Merchants invoked white superiority to argue for their share of slave markets, making leaps from anti-monarchism to collaboration with royals with a flexibility that allowed an emergent capitalism to combine with elements of feudalism and slavery, a “blatant power and money grab by merchants [that] was then dressed in the finery of liberty and freedom” (Horne 172). Here, Horne joins the likes of Cedric Robinson, whose“racial capitalism” challenges the Marxist idea that capitalism was a revolutionary negation of feudalism. Instead, Horne and Robinson agree that a historical continuum of exploitation dominated by the merchant class who allied with republicanism or monarchism as it suited their financial and social gains. In some cases, too, this continuum was embodied in a single figure, as “some aristocrats by lineage became merchants by currency” (Horne 37).Tracing these continuities, Horne pays special attention to advancements in military technologies, national and imperial political dynamics, and the force of venture capital as the material conditions which allow for this “new kind of aristocracy that is whiteness” (13).

Horne’s book offers an early transnational history for work on the paradoxes of liberal democracy. Horne hones in on the Glorious Revolution of 1688––“Not So Glorious for Africans and the Indigenous”––as emblematic of the convenient use of liberal democracy to cover merchant capitalists in the dawning of the Africa and Native North America’s apocalypse(Horne 164). Horne catalogues the historical beginnings of what Chandan Reddy calls Freedom With Violence but argues“It would be an error to ascribe fiendish barbarity to Western Europeans alone, even settlers” (Horne 59). He instead attributes the apocalypse to the systems of settler capitalism that recruited from across Europe and Britain and had impacts across the globe (Horne 59).Indeed, “the bloody process of human bondage” which included nearly 13 million Africans and possibly as many as 5 million native Americans, was “the driving and animating force” of the apocalypse that made both democracy possible and the executors of this apocalypse unbelievably wealthy(Horne 9).

Horne’s text complements studies taking up more recent paradoxes of liberalism, adding transnational historical depth to studies of our contemporary moment. Horne’s research fills out the colonial history informing work such as the Economies of Dispossession explored in a 2018 issue of Social Text, Lisa Lowe’s Intimacies of Four Continents, Wendy Brown’s Walled States, Waning Sovereignty, David Theo Goldberg’s Sites of Race, and Grace Kyungwon Hong’s The Ruptures of American Capital. Horne’s book also provides an essential antecedent to texts that take up these paradoxes in the eighteenth and nineteenth centuries, such as Timothy Powell’s Ruthless Democracy, Brenda Bhandar’s The Colonial Lives of Property, Laura Stohler’s Race and the Education of Desire, and Patrick Wolfe’s Traces of History. The Apocalypse of Settler Colonialism is an essential colonial pre-history for Aileen Moreton-Robinson’s The White Possessive, Roxanne Dunbar Ortiz’s An Indigenous People’s History of the United States, and David Stannard’s The American Holocaust. Moreover, Horne documents the seventeenth century’s “racializing rationalization of inhumanity” in complement to Jamaican social theorist Sylvia Wynter’s essential insights that categories of the “human” were crucial to the creation of racial Others that accompanied conquest even before Columbus with the landing of the Portuguese on the shores of western Africa (Horne 8).

Horne’s focus on rebellions like King Phillip’s war, which was enflamed by colonists selling Indigenous peoples into slavery, connects Indigenous and African political movements and details their power in the face of right-wing populist demagogues like Francis Bacon (Horne 145). Crucially, just as Nick Estes’ Our History is the Future reveals Indigenous struggles to be a powerful historical agent, Horne’s attention to the power of seventeenth-century political movements, especially African and Native rebellions, makes clear that transnational solidarity is as old as colonialism and remains the greatest opponent of transnational settler colonialism and imperialism. Horne’s text enhances recent work in Indigenous, Black, and ethnic studies that explores the “apocalypse,” rebellion, and settler colonialism as a set of apocalypse-inducing technologies aimed at dispossession that communities of color have been outlasting for centuries (la paperson 10). Potawatomi environmental philosopher Kyle Whyte has shown the ways Native
communities in the United States and Canada already live “what our ancestors would have likely characterized as a dystopian future” (Horne 207). Whyte’s words resonate with scholars across disciplines such as Grace Dillon (English), Cutcha Risling Baldy (Native American Studies), Zoe Todd (Anthropology), Lawrence Gross (Race and Ethnic Studies), Sidner Larson (American Indian Studies),and other Indigenous writers who emphasize that Indigenous peoples are experienced survivors of the past and ongoing apocalypse of settler colonial capitalism. Indigenous Futurisms, a term coined by Grace Dillon, was inspired by Afrofuturism which builds on Mark Sinker’s claim that the “Apocalypse already happened: that (in Public Enemy’s phrase) Armageddon been in effect”(Sinker).Horne’s study offers a vital historical archive for these recent anti-colonial futurisms.

Horne’s vibrant language and anticolonial methodology tracing seventeenth-century apocalypse adds urgency to his argument that revolution today is not just possible, but long overdue. For instance, his historical narrative relates the rebellions in1640s Barbados, Antigua, Virginia, Maryland, and Bermuda to our own delayed revolutionary moment, making clear that the apocalypse was not merely a game of the elites, but, rather, perpetrated by those who could rapidly class-climb by consenting to a solidarity based on racial capitalism that has yet to disappear. To make these connections across decades, centuries, and geographies, Horne moves forward and backward in time in ways that can be dizzying for those more comfortable with linear chronology. However, Horne’s deliberate interruption of progressive time may be a methodological aspect of his argument. The Apocalypse of Settler Colonialism disrupts the forward movement of what Mark Rifkin calls “settler time” which normalizes colonial histories of modernity, and refuses the backward revisionism that Claire Colebrook reads in Western apocalyptic narratives(Rifkin). In this interruption, Horne’s methodology closely aligns with Nick Estes’ explorations of the apocalyptic prophecies informing the Standing Rock movement. Estes reminds readers that “Indigenous resistance draws from a long history, projecting itself backward and forward in time” (Estes 18). Similarly, Alexis Pauline Gumbo examines this forward-backward movement in terms of “black feminist time travel,” a time-space continuum where those seeking social justice today draw on the strength of people like Harriet Tubman, who, too, used her imagination of the freedom that many experience now as a source of strength to survive and free others. These Indigenous and Black studies scholars detail continuance through and beyond The Apocalypse of Settler Colonialism, vital scholarship that builds decolonial futures into the historical recognition so assiduously archived in Horne’s research. Horne’s research and powerful conclusion gain even more force when understood in conversation with this growing body of research. The Apocalypse of Settler Colonialism also draws attention to the ways apocalypse has been used to justify and reinvigorate these systems of exploitation, as scholars like Betsy Hartmann, Joanna Zylinska, Andrew McMurry, Eddie Yuen, Larry Lohman, and Frederick Buell show and the recent issue of ASAP/Journal explores. Though Horne does not make these literary connections explicit, his brief mention of today’s alarming reprise of fascism offers scholars an opportunity to connect his work to literary, Black, and Indigenous studies scholarship regarding contemporary invocations of the apocalypse such as ecofascist responses to climate change.

The Apocalypse of Settler Colonialism provokes, but does not plot, the correlations between the rebellions and climate crisis of the 1600s and the ways that relates to our own contemporary climate chaos and social justice movements. Horne does gesture to those connections, drawing Parker’s work on seventeenth-century climate change into relation with the piratical character of capitalism, anti-Blackness, Indigenous genocide, and settler colonialism. Horne gifts scholars the space to extend these exigent connections from his seventeenth century work even farther across time and space. The Apocalypse of Settler Colonialism is essential reading for any scholar, student, or civic intellectual interested in transnational American studies, global economic systems, or the contemporary parallel rise of fascism and the apocalypses of climate change.

Buell, Frederick. From Apocalypse to Way of Life: Environmental Crisis in the American Century. Routledge, 2004.

Estes, Nick. Our History is the Future: Standing Rock Versus the Dakota Access Pipeline, and the Long Tradition of Indigenous Resistance. Verso, 2019.

Hong, Grace Kyungwon. The Ruptures of American Capital: Women of Color Feminisms and the Culture of Immigrant Labor. University of Minnesota Press, 2006.

Sinker, Mark. “Loving the Alien/In Advance of the Landing” The Wire (February 1996).

Stohler, Ann Laura. Race and the Education of Desire: Foucault’s History of Sexuality and the Colonial Order of Things. Duke University Press, 1995.

Wynter, Sylvia. “Unsettling the Coloniality of Being/Power/Truth/Freedom: Towards the Human, After Man, Its Overrepresentation—An Argument.”CR: The New Centennial Review 3:3(2003)  pp. 257-337.

Zylinska, Joanna. The End of Man: A Feminist Counterapocalypse. University of Minnesota Press, 2018.