The first three seasons of The Expanse are largely concerned with how class structures and oppressive politics replicate themselves, even in the far reaches of space. 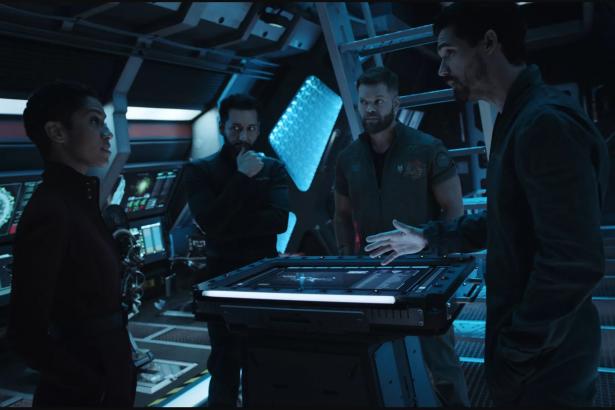 A year ago, The Expanse was canceled. News of its doom arrived while its third season was airing on SyFy, the reported rationale being that the rights agreement between its production company and its host network was not terribly profitable for the latter. In about two weeks, the show was saved by Amazon, an announcement made by Jeff Bezos himself. If pure entertainment is your concern, this was good news: The Expanse is one of the most dense and rewarding science fiction shows in recent memory, and at the time only one-third of the way through a nine-novel adaptation. Now it could continue, at the small cost of giving the world’s richest man a little bit more of your money and attention.

Despite its high-profile new home, The Expanse is very much the same show. Its fourth season, set to premiere on December 13th, picks up immediately after the events of the third season finale — which in turn was the slow-burn culmination that began with a missing girl and ended with the discovery of alien life and other worlds.

Season 4 pumps the brakes a bit to rearrange the show’s sprawling array of characters and places. The action centers around Ilus, a new, seemingly unpopulated world found beyond a newly opened gate to other star systems. Collectively, humanity is struggling to deal with the sudden revelation of new, habitable worlds, and ultimately dealing with it poorly. The first three seasons of The Expanse are largely concerned with how class structures and oppressive politics replicate themselves, even in the far reaches of space.

There’s a land rush. The RCE, an energy company with a contract to mine Ilus — dubbed “New Terra” by some — dispatches a research team. But their mission is complicated by refugees from the Asteroid Belt station Ganymede, who, with nowhere else to go, run a blockade to quickly claim land as their own. Knowing that this will likely end poorly, United Nations chief Chrisjen Avasarala (Shohreh Aghdashloo) dispatches the crew of the gunship Rocinante to arbitrate. Captain James Holden (Steven Strait) and his crew once again find themselves in the middle of a conflict that threatens to become the epicenter of something much larger — especially when it seems like the planet itself might be alive.

In the six episodes released in advance to critics, the new season of The Expanse feels like the beginning of a grand second act. The first three seasons of the show were driven by the slow realization of scale, as one mystery gradually unraveled into the increasing certainty of open, deadly war. With the pathway to other worlds open, the tensions between the various factions of The Expanse are dialed down as the show digs in for a story about the ugly, messy greed of colonization.

Fans of Battlestar Galactica will see a lot in common with that show’s third season, where colonization of a barren planet served as a crucible for its characters and a swing-for-the-fences attempt to make its themes about hostile occupation and resistance extremely clear. The Expanse has less of a handle on what it’s trying to do on Ilus / New Terra, partly because it operates on such a large scale, and it takes a long time to show how the effects of its now-larger universe begin to spiral outward.

At its best, The Expanse uses its new status quo to drive its characters into making a lot of bad calls. Holden and the Rocinante crew are meddling in the affairs of other meddlers, and all of them are acting in response to the actions and decisions of those in power. At the heart of it all are the fundamental hubris of colonization, the entitlement that makes people believe they can take whatever unclaimed land they find, and the desperation that forces the oppressed to make a similar gambit. While it’s possible for some characters to consider their actions noble in the moment, over time it gets harder to call what they’re doing good.

One of the things that makes The Expanse such compelling television is the way it makes space tangibly dangerous. Whenever the show leaves Earth, neither the viewer nor the characters are ever unaware of the razor’s edge they stand on every second they remain alive. That tension radiates outward to the political landscape of the show: the power plays and backstabbing and spurned populaces with chips on their shoulder gradually ratchet up the pressure on an already fragile stability. You watch the show and wonder if it’s all going to hold together just a little bit longer, and if it even deserves to.