If we truly want to live in a world that is equal, just and inclusive to all, a more honest conversation is required about the politics of borders and migration. 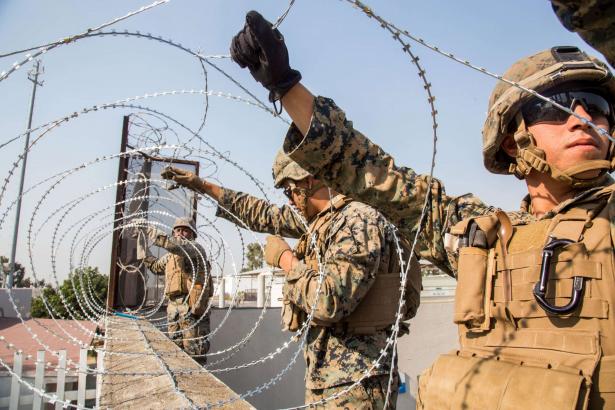 We can’t reckon with the extreme inequalities and inherent injustices of immigration policy without an analysis of how borders, the state and capitalism function to create them.

Current liberal immigration news is often centered on reducing current harm — resisting Trump’s “border wall” and expansion of concentration camps, advocating for immigration reform and countering attacks on the asylum process. All of these efforts are critical to preventing more unnecessary death and suffering and should not be dismissed. We need more of them.

However, if we truly want to live in a world that is equal, just and inclusive to all, a more honest conversation is required about the politics of borders and migration.

In order to understand immigration policy, it is important to acknowledge that we live in a world of global apartheid propped up by borders and nation states that exist to protect capital and territory, and restrict mobility. Border militarization is necessary in global capitalism in order to maintain a system of resource and labor exploitation that persists among nations, particularly in the North–South Divide.

Nandita Sharma — a professor of sociology at the University of Hawai’i in Mānoa and an activist in feminist, anti-racist, anti-capitalist, and the autonomous worldwide No Borders movement — told Truthout: “Every immigration policy is designed to exclude. You can fine-tune it … but at the end of the day, who are we to decide who gets to move and who doesn’t get to move — who gets to live and who gets to die?”

Immigration policies will never be “just” or “fair.” Let’s break it down.

For almost a century after the Declaration of Independence was signed, the United States had open borders. Restrictive immigration laws did not exist in the U.S. until 1875 when the Page Act was signed, which primarily targeted unfree Chinese laborers, or “coolies,” and women brought for “lewd and immoral purposes.”

The Page Act was a precursor to the Chinese Exclusion Act of 1882, which dramatically shifted immigration policy and laid the foundation for more restrictive mobility laws, and the U.S. grew into the contemporary nation state we know today.

There is a debate on what is meant by the “nation state” and when it emerged historically, but “all states … want to control people’s mobility,” Sharma told Truthout. Nation states control mobility by preventing people from entering. They tend to be less concerned with people leaving.

The “border” controls migration materially and in our mind. It exists in one place and yet, “the border is everywhere and is constantly shifting,” said Marisa Holmes — an activist filmmaker, graduate student at Rutgers University, and organizer with the Metropolitan Anarchist Coordinating Council (MACC) in New York City — in an interview with Truthout. In other words, the border is pervasive, making its way into everyday life even well within the confines of the country: It exists at Border Patrol checkpoints, as agents on New York busses, ICE raids in Mississippi, migrant detention facilities in Philadelphia.

Alejandra Pablos — an immigrant rights and reproductive justice organizer and a member of the migrant justice group Mijente — told Truthout that in Arizona, “it’s super militarized.”

With her Mexican passport, “a paper that lets you cross borders,” Pablos said she can travel easily into Mexico from Arizona, but she “can just never come back again … to this side of the wall.”

According to Roberto Lovato, a writer and journalist working out of the San Francisco Writer’s Grotto who has worked or reported on Central American refugee issues for almost 30 years, the border is “an illusion, a deadly, murderous, memory-destroying thing.”

To create a border, states have to destroy the memory of what came before it.

The Creation of Whiteness, Nationalism and Immigration Controls

Many of the memories destroyed by borders have to do with connection. Borders separate and rank people, helping to create and solidify hierarchies of identity. The creation of identities is woven into the fabric of national laws and ideology, and those laws and ideologies reinforce which identities “belong” (“white,” “male,” “heterosexual,” “Christian”), and which do not.

“Nationalism is an ideology that legitimizes the idea of the nation and organizes a political community on that basis,” said Sharma.

Whiteness is a sociopolitical construct, an American “lie,” as James Baldwin called it, that was created “because of the necessity of denying the Black presence, and justifying the Black subjugation.”

It is in The Naturalization Act of 1790, which stated that “any alien, being a free white person,” could apply for citizenship as long as they lived in the U.S. for two years and in the state where they filed for at least one year.

Whiteness has evolved in the U.S. over time and is inextricably attached to power and labor. It was essentially “an adjective for the ruling class,” said Sharma.

Whiteness, nationalism and immigration controls are systems of exclusion and hierarchy that the ruling class uses to maintain power. Solidarity among workers is fractured both within the state and across borders, as people imagine themselves to be divided by races and nations.

“It is a strategy to dupe this part of the working class into thinking they were something other than working class people,” Sharma added. “That portion [which] imagines themselves as white continually falls for it over and over again.”

The Fallacies of the Border and Who Profits From Them

Leftist migration scholars and activists point to two common misconceptions of the border. The first is that a “wall,” borders, or even the entire Department of Homeland Security can stop people from migrating when they need to move. All evidence and studies on this show that tougher immigration policies do not deter people from migrating.

The second, perhaps “bigger fallacy” according to Sharma, is believing that immigration controls are meant to stop people from entering. “They’re designed to weaken them once they get in,” said Sharma. “The whole system from start to finish is one that makes money off of all of this misery.”

Billions have been spent on border enforcement, migrant detention and surveillance. From detention camp contractors like CoreCivic and the GEO Group to tech companies like Amazon, Microsoft and Dell, and data-mining companies such as Palantir, who all contract with U.S. Immigration and Customs Enforcement (ICE), to the staffing of nearly 20,000 Border Patrol agents whose salaries start just above $55,000, to the private prison firms who lobby Republicans, the list of who profits from migration policing and surveillance goes on and on.

For Pablos, borders and capitalism go hand in hand. “We’re reproducing global mass displacement through our capitalism,” said Pablos, who spoke about how the North American Free Trade Agreement (NAFTA) fueled migration. Meanwhile, the criminalization of migrants ensures “that at the same time, capitalism thrives.”

Capitalists also profit off of those who make it across the border. When you have 11 million people with no legal status, who risked their lives to get here, who spent their life savings or went into debt in the process, you create a labor pool that is vulnerable, cheap and exploitable.

Trump himself has historically benefitted from undocumented labor and even admitted this is a common hiring practice among employers as “a way that people did business.”

A cutoff of undocumented labor could well cause a recession and lead the economy to contract.

“Entire sectors of the American economy would effectively cease to exist were it not for undocumented immigrants,” Sharma said.

A Future Without Borders and Nations

Transcending borders and nation states is a revolutionary project. The institutions that sustain them will not be taken down by politicians in our current political system, no matter how progressive that person may be, although the “most left candidate might create the political conditions … to expand our horizons” in terms of challenging borders, according to Sharma.

Like any revolutions in our past, dismantling these systems would require massive mobilization, direct action, organizing, political education, and drastic shifts in consciousness across all borders.

“When I talk about abolition, I’m talking a lot about creation,” Pablos said. “Organizers like myself do have that new vision, and we’re ready to have these conversations. And again, if people created the structures, we can create new things. We can create new values, new principles.”

Rebecca Centeno is an activist media maker and journalist covering border/immigration. Her work has been featured on Democracy Now!, The Washington Post, NowThis and act.tv. Follow her on Twitter: @r_centeno.

This story was produced with support from the Freedomways Reporting Project, a fellowship program for journalists in the U.S. South whose reporting advances justice.