Flashback: Trump Warned That a ‘Weak’ and ‘Ineffective’ President Would Start a War With Iran to ‘Get Re-elected’ 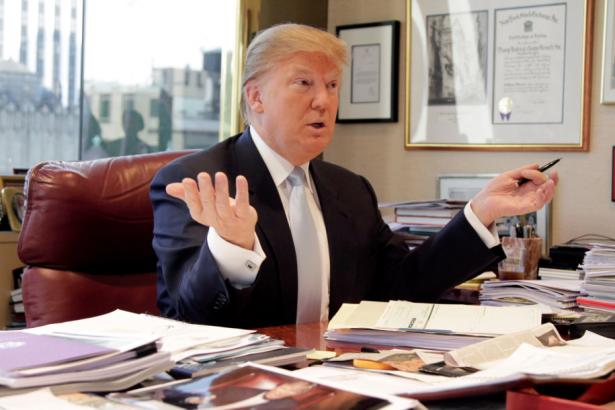 Donald Trump at his desk in his New York office, where he warned Barack Obama would start a politically motivated war with Iran, Richard Drew/AP/Shutterstock

The American public should distrust a “weak” and “ineffective” president whose “poll numbers are in a tailspin” if he provokes a military confrontation with Iran. He’s doing it to “save face” and “look tough” in a transparent attempt “to get reelected.”

That was the stark warning that Donald J. Trump voiced repeatedly on social media in the early 2010’s about his predecessor, Barack Obama. The comments have taken on discouraging resonance at the dawn of 2020, as president Trump — impeached by the House and facing trial in the Senate, his approval ratings mired in the low forties — ordered a drone strike that killed top Iranian general Qasem Soleimani. The assassination of the powerful commander of Revolutionary Guard threatens to spark a broader war with the Persian Gulf nation.

Trump is notorious for having foreshadowed the worst of his presidency on his Twitter account. But even by the standards of “there’s always a tweet,” Trump’s ideation about a president launching a conflict with Iran to boost his domestic standing is extraordinary.

Trump first began warning of a politically motivated war with Iran more than eight years ago, shooting a video at his desk in Trump Tower in November of 2011, in which he denounced the “outrage” of launching “a war in order to get reelected — and I believe that’s going to happen.”

“Our president will start a war with Iran because he has absolutely no ability to negotiate. He's weak and he's ineffective. So the only way he figures that he's going to get reelected — and as sure as you're sitting there — is to start a war with Iran.” pic.twitter.com/usZFLiHnBw

In order to get elected, @BarackObama will start a war with Iran.

Trump picked up the warning again with a pair of tweets in October 2012, in the heat of that year’s presidential campaign:

Now that Obama’s poll numbers are in tailspin – watch for him to launch a strike in Libya or Iran. He is desperate.

Don't let Obama play the Iran card in order to start a war in order to get elected--be careful Republicans!

Despite Obama being re-elected, soundly defeating Mitt Romney, without a conflict in the Persian Gulf, Trump did not let go of his theory that the commander in chief would use his war powers against Iran for political gain:

I predict that President Obama will at some point attack Iran in order to save face!

Remember what I previously said--Obama will someday attack Iran in order to show how tough he is.

Trump continued beating this drum into November of 2013, because of Obama’s alleged inability to negotiate with Iran.

Remember that I predicted a long time ago that President Obama will attack Iran because of his inability to negotiate properly-not skilled!

Here we sit now, as a nation, some five years later. Trump has ripped up the Iran nuclear deal that Obama negotiated. And he has assassinated an Iranian commander — threatening to spark another war in the Middle-East — just as Trump’s own reelection prospects look dim.

The White House insists the strike that killed Soleimani was pre-emptive in nature — seeking to block the general from launching deadly attacks. “General Qassem Soleimani has killed or badly wounded thousands of Americans over an extended period of time, and was plotting to kill many more,” Trump tweeted Friday. However, the New York Times reported, citing a Defense Department official: “There was nothing new in the threat presented by the Iranian general.”

Perhaps the president’s actions are above fully above board and serve the national interest.

Or perhaps we’re now facing what Trump warned of all the way back in 2011 — an outrage.

Tim Dickinson is an American political correspondent. Based in Portland, Oregon, he is a contributing editor to Rolling Stone.