Australia: “Magpies are Mimicking Emergency Vehicles, They’ve Heard So Many”

Australian social media is an “unfiltered waterfall of tragedy as the country burns.” Each day an area is declared a 'leave zone', an 'evacuation zone', a 'state of disaster', as vast chunks of the country are no longer suitable for human life. 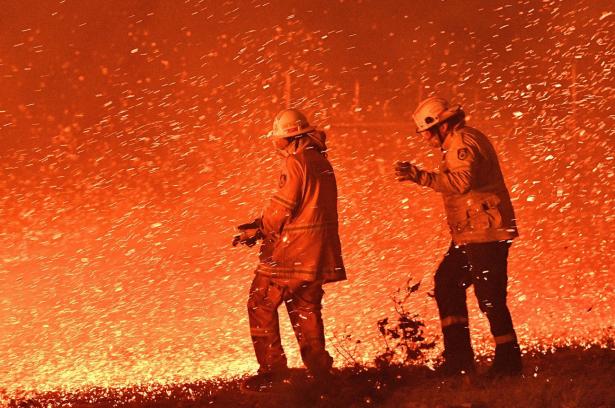 Firefighters struggle against the strong wind in an effort to secure houses from bush fires near the town of Nowra in the Australian state of New South Wales.,Saeed Khan/AFP via Getty Images

Existing on the internet in Australia right now is beyond imagining.

Sydney, where I grew up, where I spent my first twenty years, has been under smoke for months. Canberra, my gorgeous home for the eight years before this one, has been under smoke for weeks. It had the worst air quality of any major city in the world for much of this week; our beautiful valley traps smoke from hundreds of kilometres away. I know this because every photo I have seen of my two hometowns for months has been obscured by so much smoke that they hurt to look at.

Paihia, on the Bay of Islands in Aotearoa, New Zealand thousands of km to the east, is currently smelling the smoke from our fires. I know this because my friend Tobias moved there after we lived together for years. Glaciers south of there are turning pink and brown, from the ash of the burning land here. Dunedin’s sky is orange from the smoke.

Tomorrow will be Canberra's worst fire day this season. So far. Mum has escaped to Sydney after locking her most important belongings in a fire safe. The small home we built together when we moved to Canberra is three blocks from the bush. She messaged me tonight safe, but scared. Friends in Canberra are preparing their evacuation plans for tomorrow, when conditions will be catastrophic. Again. I know this because I looked at my news feed.

More than half a billion animals have died, and the ones who haven't died are walking up to my friends' homes dazed and confused and seeking water, miles from any fire front. I know this because I saw the photo my friend took of the exhausted koala next to his tap. Canberra ran out of face masks that make it safe to breathe there right now, so yet other friends organised to bring hundreds to town to distribute for free to people who need them. I know this because I saw the tweet.

Magpies are mimicking emergency vehicles, they've heard so many. Entire towns are walking into the ocean to survive the firestorm. There are children who will have as some of their earliest memories the smoke, the fire, and the sky turning red and black at 9.30am as they fled their homes. We know these things because our friends are sharing these articles and photos as part of an unending stream of unprocessed grief. Our whole world online is only grief. Angry grief, sardonic grief, just grief. That's what we do now. Grieve.

"An unending stream of unprocessed grief"

Each day brings a different part of a different state that has been declared a 'leave zone', an 'evacuation zone', a 'state of disaster'. They're all declarations distinct from one another but fundamentally they are entire vast chunks of the country that are currently not suitable for human life.

And Australia is a big place, but it's a place we know personally. That town is where mum and I walked on the beach just before I left Canberra. That district is where I drove through a few years ago on the way to meet a love in Melbourne. The rainforest national park that burned months ago is where a lifelong friend spent her short winter break. That's the airport down the road from where I lived, where I said my hellos and goodbyes for years and years, and where yesterday an elderly person died from just breathing the air. That's the road on the peaceful hill behind my old home in Canberra that might be closed tomorrow because if a fire started in that peaceful little bushland reserve, it would take hold so fast that emergency services in the centre of our nation's capital might not be able to save the lives of anyone in the reserve. Behind my old house. Where I began or ended my best days with a walk or run. Right there.

These places are where real live actual people live and where they've seen their lives destroyed, or curtailed, or filled with fear. That's where literally hundreds of the most important people in my life live their lives, right now.

We Australians live with fire as a constant in our lives. We've all had the 'oh I wouldn't live there, there's only one road out' or the 'it's so beautiful but I'd never stop thinking about the fires if I was there in summer' conversations. We know it. We understand the risks. Fire is not new.

But it's January 3. Summer has barely started.

The southern fire season has barely started. But then, fires started burning up and down the southeast coast in August. In winter. So what's summer?

We've also all had the 'it's rainforest, it'll never burn' conversation. But this year, the rainforest burned too.

2019 was just found to be the warmest year on record in Australia. And we have precisely no indication that this trend will change. Because the people who are supposed to be in charge, here and elsewhere spit on the lives of the people who voted them in, then ask us to be grateful for it.

It is impossible to describe the sensation of rage, and helplessness, and grief, all at once that so many of us are softly or loudly going through right now.

Every conversation on every platform is about the fires. Every group chat is filled either with people letting us know in quiet private ways that they can't handle the news, that they're scared, that they're angry, that they don't know what to do – or desperately trying to distract each other with something nice, or something funny, or just something.

And then there's the other side. Even now, as this unprecedented disaster rolls over all our lives, there are people still happily, belligerently declaring that the reason the fires are bad is that environmentalists have stopped fire prevention. This is a vicious, deliberate lie that has been swallowed by a number of our neighbours. Their inability to distinguish meme from fact is muddying the waters on behalf of the powerful. Its only purpose is to distract people from being angry at governments of every political stripe that have failed to plan for this. That have failed to give firefighters what they need.

The vast majority of Australian firefighters are volunteers, who fundraise for their equipment. What a disgrace. We are a country already made for fire that has dried out over the last decade, where the forests that once slowed fires are now dying kindling ready for the next lightning strike. But the people who are supposed to be in charge haven't prepared? This was a process that was foreseen, predicted, documented, reported on, yelled about. For years. Fire chiefs tried desperately, over and over, to meet federal government ministers last year to prepare for this. We knew this was coming. So did they. They knew. And they did nothing.

“We knew this was coming. So did they. They knew. And they did nothing.”

But who are we angry at? ‘The dang treehuggers’.

What, we’re told, had nothing to do with it? The hotter, longer, drier fire seasons. The winters with less rain. The wet seasons with less wet. All the things that the scientists warned us about, for decades. Nope. Nothing at all. Don't know what you're talking about. We've always had fire.

The process of going through the grief of places, people and landscapes you care about being ruined while watching other people tell you gleefully that nothing is happening is genuinely a mindfuck. I don't know any other word to describe how swivel-eyed it makes me feel. The fact that I'm thousands of kilometres away from the fire fronts in a calm place where our fire season has just finished – though the northern fire season was also extended for a month last year and only just ended on December 1, because it's so much hotter here than usual and the monsoonal rains haven't arrived properly in two years now and the bush is changing and my fingers just keep speeding up and it's like I can't stop because if I stop writing, I lose my entire mind.

I want people outside Australia to know and to feel the despair and the rage and the grief and the intense need to change something, because we all need to feel those things to spark the determination we need to get through this crisis that will last for the rest of our lives – but fundamentally I'm typing this out in my quiet loungeroom in Darwin because if I didn't, I think I'd just start screaming and I don't know when I would stop.

But I don't have it. I know without a shadow of a doubt that it exists. There are smart, important, urgent things that all of us can do and need to do. This can only turn around if we exercise all the power we have as assembled people to turn it around, ourselves. The people in charge of our federal government have made it clear that they will not do it themselves. They deserve our scorn – and to all lose their jobs. All of them. That's where 'it' needs to take us.

But today I don't have it. I just have this scream in my chest that I'm barely holding in, and that I'm telling you about on here so that my new neighbours in Darwin don't meet me by hearing me crying helplessly into the night. That's all I have.

The last thing I said on Facebook before New Year was that I've been living with climate grief for a long time, and that there are consistently four things we need to get through it. That's still true:

* You will want someone to talk to.

* You will want a way to get the grief out.

* You will want a joyful thing in your week to keep your chin up.

* And you will want something meaningful to do about the problem.

Thank you for being my someone to talk to.

And people overseas - if someone tells you that Australia always has bad fires and you shouldn't worry, point them to us. We want to have a word.

[Josh Wyndham-Kidd is an environment campaigner living on Larrakia country in Darwin, Australia.]