When Capital Threatens to Strike in Your City

With a resurgent left-labor movement and a new crop of progressive and socialist city council members, nervous Chicago real estate developers are hinting they’ll pull their investments in the city. 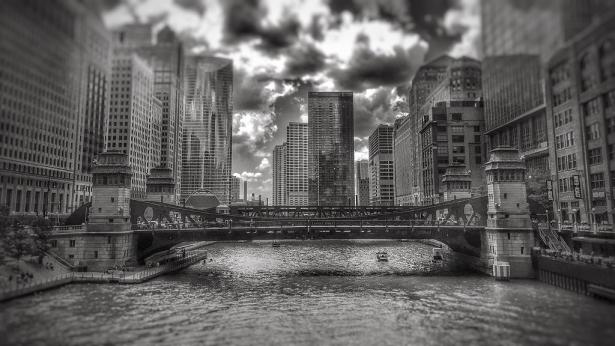 In Chicago, the rise of fighting unions, resurgent social movements, and the election of six socialist aldermen to the city council has raised demands for progressive tax reform, rent control, and more affordable housing. But whenever such demands are raised under capitalism, capital will strike back.

Real estate investors are implicitly threatening to deploy the capital strike, one of the most powerful tools in the capitalist arsenal, to head off left policy goals by shifting their investments from Chicago for more putatively business-friendly urban real estate markets. The logic of such a strike is to pull investment from Chicago and curb economic growth, starving Chicago of tax revenues and hobbling the nascent push for social-democratic reforms — a trump card capitalists are always able to deploy, since they control the resources needed to make investments in jobs and basic human needs like housing.  The democratic will of the people would be punished for not bending to capital’s will.

Understanding how capital levels such threats, and analyzing how seriously we should take them, is key for the rising municipal-level left movements throughout the United States.

In a recent Chicago Tribune piece, the CEO of Magellan Development Group, a firm with a multi-billion dollar real estate portfolio spanning the globe, claimed, “We love Chicago but are super nervous about the headwinds Chicago faces. … I would call it as difficult an environment from a capital standpoint as I’ve ever seen.”

Changes to the property tax system have developers particularly spooked. John Diedrich from CA Ventures, which manages a $13 billion real estate portfolio, claims, “Most of our institutional investors have basically redlined Chicago.” Due to uncertainty over property tax hikes, “they are not going to deploy capital here.”

Developers quoted in the Tribune also raise concerns over the rising “cost of doing business in Chicago” that include higher property taxes, increased affordable housing demands, rent control, and reforms to the city’s tax increment financing (TIF) system — long used to give away massive amounts of public dollars to corporations — which will impact their bottom line. Sterling Bay points to these “potential rises in expenses” as the reason they are exploring projects in other cities like Atlanta, Denver, and Los Angeles.

The city will have to raise $1 billion in new revenues by 2023, in part by raising property taxes to fully fund the public workers’ pension obligations that city officials have shortchanged over the last two decades. Developers are concerned that higher property taxes — the city’s common solution to fixing budget shortfalls rather than, say, taxing the rich — will dissuade families and firms from buying in Chicago.

This concern comes as progressive forces are attempting to retool the city’s property tax system to make it fairer. The previous Cook County Assessor Joseph Berrios, a Democratic political machine hack, purposefully under-estimated the market value of homes owned by the richest 10 percent of residents when putting together property tax bills. These low estimates effectively gave the rich an $800 million tax cut.

At the same time, he over-estimated the home values of the bottom 70 percent of Chicago residents, inflating their property tax bill and making them pay 20 percent more in property taxes to make up “the $800 million shortfall in property tax relief given to the rich.”

The progressive Cook County Assessor Fritz Kaegi, elected in 2018, is implementing a more equitable model for assessing real estate market values that is driving up property taxes paid by affluent residents. The real estate industry, however, sees Kaegi’s fair property tax model as a sign of larger political trends. They see a rising left-labor-community alliance gaining power and influence over how Chicago is governed.

The business sector’s neoliberal project of low taxes on the rich and regressive taxes on working people, colossal debt financing, tax subsidies for business, and austerity for everyone else is running up against its own political and economic contradictions. It has created a massive budget deficit that is pushing the city to the brink, in which it either eviscerates the public sector in order to service its debt or finds new revenue streams to fund vital public goods.

The left-labor-community alliance is calling for a more progressive tax system, an end to tax giveaways for businesses, and more robust public supports for the working class and poor people. In this struggle, the Left has, as usual, people power. Capital has economic coercion.  If political officials adopt the Left agenda, the real estate industry is signaling that they will go on strike by withholding capital investment from the city to discipline the mayor, city council, and working people.

In reality, the real estate capital strike is scapegoating the emerging left policy push for its own over-investment. Two recent real estate industry reports place Chicago’s housing market at the bottom of the top 100 metro areas in the United States, where they forecast prices and volume of sales will be flat.  Moody’s predicts that Chicago’s population economic growth will continue to lag behind other major US metro areas well into the next decade.

Chicago population and economic contraction is largely due to declines in immigration and the exodus of middle-class African Americans as neoliberal urbanization and austerity has made the city a more hostile and unaffordable place to live. At the same time, the city has experienced population gains of the coveted professional class able to pay premiums to live in Chicago’s downtown and gentrifying zones. Those areas have experienced a real estate development boom, with a multitude of fifty-story apartment towers and city-within-a-city mega-developments set to hit the market in upcoming years.

The Tribune piece also quotes Matt Garrison, from Chicago-based developer R2, saying his company is looking for opportunities outside Chicago because they have already tapped out the Chicago market. “A lot of the low-hanging fruit has been harvested in Chicago, so we’re looking at places where we can find the type of opportunities we saw five or six years ago in Chicago.”

The over-building of high end housing is being debt financed — on the public dime.  Two of the biggest mega-developments, Sterling Bay’s Lincoln Yards and Related Midwest’s The 78, received $2.4 billion in TIF giveaways. The TIF program is the city’s go-to economic development fund when officials want to bypass transparent channels of public budgeting processes to finance private projects.

Sterling Bay is particularly salty about increased affordable housing requirements for developers receiving TIF subsidies because left lawmakers and activists forced them to offer more affordable units in exchange for their billion dollar TIF handout. Such developers don’t want their affluent consumers to pay more in taxes to replenish those ill-gotten subsidies. But they still want unrestricted access to public dollars. Austerity is for the public, not for capital.

Even though Chicago’s market is not as profitable for billion-dollar investments on the scale of the mid-2010s, capital will not let a crisis go to waste. They are scapegoating left policy in order to discipline the public and lawmakers to support real estate class interest achieved by low property taxes for the rich, minimal and easily skirted affordable housing requirements, and unabated TIF handouts.

What lessons can leftists working in local electoral politics draw from this?

First, capital creates crisis conditions and then uses those conditions as a cudgel to beat back left reforms. Lawmakers are prone to accept business’s claims at face value, rather than as a pretext to promote business’s interests. The Left needs to counter this chicanery by revealing capital’s interests while arguing for our project.

Second, sometimes the bark is louder than the bite.  If there is demand, someone will seek to make a profit off that demand, even if they do not get to make as much profit as they want.  For instance, New York City experienced its greatest expansion in new housing construction after its rent stabilization program went into effect in 1974, even though real estate capital threatened to boycott the New York market when it adopted these measures.

But capital strikes aren’t entirely empty threats. Capital’s geographic mobility pits cities against each other in a race-to-the-bottom to create the most favorable terms for investment capital. This poses a genuine challenge to local and state social-democratic electoral strategy — but not an insurmountable one.

Solidarity between cities can undercut capital’s ability to play cities against each other. To minimize the effectiveness of capital using its mobility to extract concessions from cities, left, labor, electoral, and community groups need national-scale organization that can promote a common political platform for the working class. For example, the national housing agenda promoted by Sen. Bernie Sanders and Rep. Alexandria Ocasio-Cortez will make rent control the law of the land and expand affordable housing for all regions of the country.

Most immediately, for larger cities, leftists can make it politically impossible for capital to extract billion-dollar tax subsidies from the city. Ending subsidies for private real estate developments counteracts the economic impact of a capital strike while freeing up revenues for education, public mass transit, and other public goods.

Chicago’s centrality in the regional and national economy is due to capital’s need for agglomeration of headquarters, business and financial services, proximity to transportation/logistics, and access to research facilities and other sectors that facilitate accumulation. The scale and scope of its economy means Chicago will continue to attract investment capital seeking place-based advantages from the clustering of these business sectors, limiting the efficacy of a real estate capital strike (especially in relation to coastal cities as climate change continues).

Despite all the bluster, real estate capital is place-sticky because land development is inherently is local.  The city is and will remain a key location for capital accumulation in the twenty-first century. We don’t need to back down from fighting for an agenda that can make Chicago — and everywhere else — a city for the many, not the few.

Stephanie Farmer is an associate professor of sociology at Roosevelt University.