Today, people in sub-Saharan Africa are the most genetically diverse in the world. Newly deciphered genomes of four African children who died between 4 and 10 thousand years ago have some surprising implications for the period before then, and since. 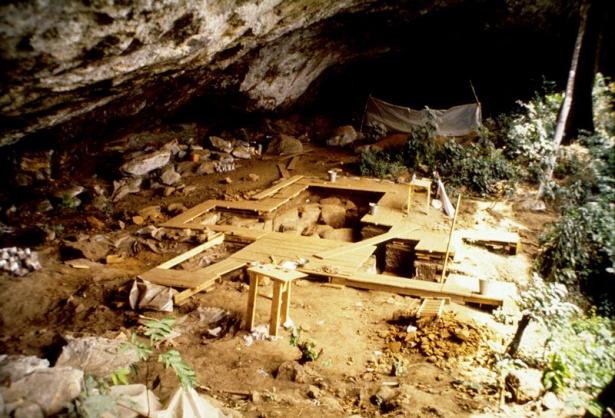 Excavations at the Shum Laka rockshelter in Cameroon, where the ancient human remains were found,Pierre de Maret

The ancient-genomics revolution is finally reaching the cradle of humanity: Africa. Researchers have sequenced the genomes of four children who lived in what is now Cameroon several thousand years ago.

Their genomes — the first to be collected from any ancient human in West Africa — raise questions about the origins of a migration that carried languages and agriculture across the continent, and hint at older events in human history, such as the emergence of Homo sapiens and its spread out of Africa.

But the findings underscore the yawning gap in scientists’ understanding of African population history, relative to that of Eurasia, the Americas and even Oceania. Researchers have sequenced more than 1,000 ancient human genomes from these regions, versus fewer than 80 from Africa, few of which are older than 10,000 years.

“We don’t have a clear picture right now,” says David Reich, a population geneticist at Harvard Medical School in Boston, Massachusetts, who co-led the study. “Africa is the most diverse place on Earth. It’s where our particular sub-lineage of humans originated.” It’s no surprise, he adds, that even the relatively recent history of its populations is hard to decipher today.

Today, although people in sub-Saharan Africa are the most genetically diverse in the world, many of the region’s inhabitants have similar ancestry because of a widespread migration that began around 3,000–5,000 years ago. Originating in West Africa, this migration — known as the Bantu expansion — spread agriculture and a family of common languages into eastern and southern Africa, where many residents still speak Bantu languages and have West African ancestry.

Linguists and archaeologists have theorized that an area called the Grasslands, near the border of modern Cameroon and Nigeria, was the origin of the Bantu expansion. Bantu languages spoken there are more diverse than anywhere else in Africa, and archaeological evidence suggests that humans in the region were in the early stages of domesticating crops and transitioning to an agricultural lifestyle thousands of years ago.

Researchers led by Reich and Mary Prendergast, an archaeologist at Saint Louis University — Madrid Campus and Harvard Medical School, analysed remains from a rock shelter in Cameroon called Shum Laka. The cave-like site holds human remains that are up to 30,000 years old, but Reich and Prendergast only managed to obtain sufficient quantities of DNA to generate full genomes for two young boys, who lived 8,000 and 3,000 years ago. They also collected more limited genome data from a boy and a girl from the same periods, respectively. A genetic analysis, published on 22 January in Nature1, suggests that the boy and girl from 3,000 years ago were second-degree relatives, such as half-siblings or an uncle and niece. The 8,000-year-old pair were fourth-degree relatives, perhaps distant cousins.

Despite a gap of 5,000 years in some cases, all four of the children’s genomes were remarkably similar to one another. But compared with the DNA of modern Africans, their genomes were more closely related to those of the hunter-gatherer groups in west central Africa that are sometimes known as Pygmies than they were to those of contemporary Cameroonians or other Bantu-speaking populations.

The disconnect between remains from Shum Laka and contemporary Bantu speakers was surprising, says Reich, and it suggests that the population the ancient children belonged to was not among those that migrated out of the area during the Bantu expansion. It’s possible that other groups from the area carried Bantu languages around Africa, but Reich says his team’s data should encourage researchers to explore whether the migration began elsewhere — perhaps further west, in present-day Nigeria.

“We shouldn’t jump to the conclusions that the Bantu expansion originated somewhere else,” says Pontus Skoglund, a population geneticist at the Francis Crick Institute in London. The Shum Laka individuals might have been from one of many populations living in the region at the time, he adds.

The researchers also used the genomes to understand even older events in human history. The four children seem to descend from a group of Homo sapiens that branched off from the common ancestors of our species more than 200,000 years ago — perhaps even earlier than the ancestors of distinct Indigenous southern African groups known collectively as Khoesan peoples. Previous studies of modern human genomes had suggested that these groups descended from the oldest distinct lineage of Homo sapiens.

“These results show that West and Central Africa are now the front line of research on human origins,” says Eleanor Scerri, an evolutionary archaeologist at the Max Planck Institute for the Science of Human History in Jena, Germany. “We now see that populations from these regions have roots as deep as those seen in southern Africa.”

Ann Horsburgh, a molecular anthropologist at Southern Methodist University in Dallas, Texas, says the study adds little to our understanding of African prehistory — for now. But that’s unsurprising, given how little researchers know about the continent’s past genetic diversity. “You cannot expect data into the void to be very meaningful. We need much more data,” she says. “It’s early days for this kind of work in Africa.”