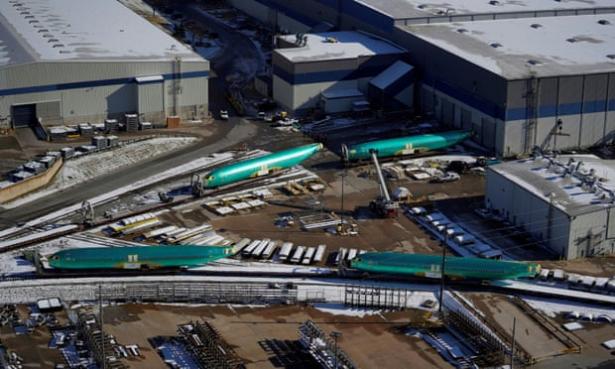 “We’ll get through it,” Boeing’s new chief executive, Dave Calhoun, told investors this week after the aerospace giant announced its biggest losses in 20 years. The thousands of workers reliant on the company are not so sure.

With production of its bestselling plane, the 737 Max jet, on hold after two deadly airline crashes, thousands of workers in Boeing’s US supply chain are have suffered layoffs and loss of hours. The cost to Boeing of the grounding is now estimated at close to $19bn. The impact of the grounding is so severe it is holding back the wider economy, according to government figures, and hurting companies and their employees.

“I’m worried about my bills and how I am going to pay them,” said Jordan Simoens, a sheet metal mechanic at Spirit AeroSystems in Wichita, Kansas, who was one of 2,800 employees recently laid off. “I’m going through the struggle of finding a job, which is hard enough here in Wichita without 2,800 others also looking.” He previously worked as an auto mechanic and is considering moving to find a new job in that field.

Spirit, Boeing’s largest parts supplier, employed about 13,000 workers in Wichita prior to the layoffs. The company also laid off about 130 workers at its plant in McAlester, Oklahoma, and several other workers at its Tulsa plant. A spokesperson for Spirit attributed the layoffs to the suspension of 737 Max production and “ongoing uncertainty regarding the timing of when production will resume and the level of production when it does resume”.

John Phillips, an underwing mechanic at Spirit, is also looking for work outside Wichita after being laid off.

“Right now what we are going through is confusion, anger, sadness – because we have families to provide for, and our income runs out on March 10. Trying to find a job which may be in another state means spending money to move,” said Phillips. “As far as paying my bills it’s going to be a struggle, and financial hardship will be there.” 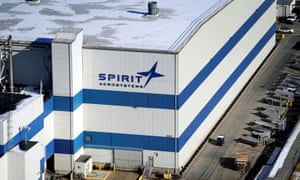 The headquarters of Spirit AeroSystems in Wichita. Photograph: Nick Oxford/Reuters

Laid-off employees will receive severance pay until 10 March, but workers who survived the layoffs are still concerned more job cuts are coming.

“Everyone’s future is uncertain. Until the 737 program goes back into production no one is safe. Spirit and and all companies who deal with Boeing are in jeopardy,” said Mike Crawford, who still works at Spirit as an assembly mechanic. “All companies will have to take the necessary step to ensure future revenues and business stability. Sadly this means more layoffs. No work means [a] reduced workforce. It would seem the only ones not paying for Boeing’s mistakes is Boeing.”

Other laid-off workers at Spirit also blamed Boeing and criticized the company’s former chief executive Dennis Muilenburg, who left with a $62m payout when he resigned shortly after the company announced 737 Max production would be suspended. A Boeing spokesperson noted Muilenburg received no severance or 2019 annual bonus, only the benefits he was contractually entitled to receive.

“We just want Boeing to know that they ruined lives for not even upholding the quality standard they set in place for Spirit to provide,” said Conner Ederund, an assembly mechanic at Spirit who was laid off. “Most of us are pretty worried about finding other jobs and what we can continue doing for our families.”

When Boeing announced its plan to halt production of the 737 Max line, it insisted none of its employees would be laid off or furloughed – but companies within its supply chain are rolling out mass layoffs across the US. About 36 people were laid off from Albany International in Rochester, New Hampshire, and numerous workers at Skills Inc in Auburn, Washington, have been laid off, furloughed or had their hours reduced.

Julian Moffitt, 32, was laid off along with a few dozen others as a quality assurance technician in Huntsville, Alabama, working for a contractor of General Electric (GE), which built the Max’s engines through a joint venture with France’s Safran and is suffering significant losses after the production shutdown.

“We were given no warning, I was repaid my remaining healthcare payments, so now I am also uninsured,” said Moffitt. He worked there for a little over a year, received no severance, and recently filed for unemployment as he tries to switch to a different job field. “If Boeing had taken the proper precautions to listen to their engineers, not rush the certification process and listen to their pilots, I would still have a job now because we would have smoothed out all the issues with the parts we produced.”

A GE spokesperson said the company does not disclose discussions with suppliers. But it said: “We are partnering with our customers and suppliers to mitigate the impact of the temporary shutdown of the 737 Max, while protecting the company’s ability to accelerate production as needed in the future.”

In addition to 2,800 jobs cut at Spirit, the logistics company DB Schenker laid off 255 workers also in Wichita and 144 workers in St Peters, Kansas.

“I was working at DB Schenker for 90 days as a temp, and the day I was to get hired they did layoffs,” said Kelly Chetina, who worked in quality control and received no severance. “It’s very hard looking for work, difficult to cover bills.”

A spokesperson for DB Schenker saidl: “DB Schenker is taking this action to adjust to order demand by our client.”

A spokesperson for Boeing estimates the 737 Max grounding restrictions will be lifted some time in the middle of this year. They said: “This is a difficult time for the industry, and we recognize the challenges the temporary 737 production suspension poses for our suppliers, our customers, and our employees. We will continue working and with all of our 737 suppliers, to address hardships and manage risk during this time.”

... in the coming year, and the results will define the country for a generation. These are perilous times. Over the last three years, much of what the Guardian holds dear has been threatened – democracy, civility, truth. This US administration is establishing new norms of behaviour. Anger and cruelty disfigure public discourse and lying is commonplace. Truth is being chased away. But with your help we can continue to put it center stage.

We also want to say a huge thank you to everyone who generously supports the Guardian. You provide us with the motivation and financial support to keep doing what we do. Every reader contribution, big or small is so valuable. Support the Guardian from as little as $1 - it only takes a minute. Thank you.