Earlier this month a Newsweek article featured quotes on how the recent introduction of the W76-2 was the result of Pentagon planning a potential first strike scenario against adversaries, especially Iran. 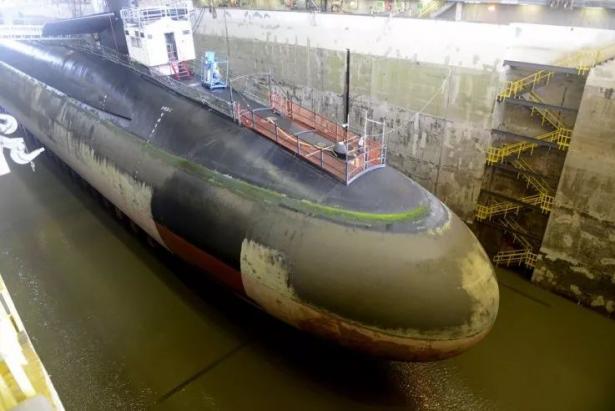 The United States has deployed a new low-yield nuclear warhead that experts warned could increase the likelihood of a conflict going nuclear, according to a new report.

The Federation of American Scientists reported Wednesday that the W76-2 low-yield nuclear warhead was supplied to Ohio-class USS Tennessee ballistic missile submarine, which deployed to the Atlantic Ocean from Kings Bay, Georgia, late last month. The report estimated that the new warhead was fitted on at least one or two of the vessel's 20 Trident submarine-launched ballistic missiles, each of which could carry up to eight warheads.

The report was authored by military analyst William M. Arkin and Federation of American Scientists Nuclear Information Project director Hans M. Kristensen. Earlier this month, Arkin authored a Newsweek article featuring quotes by Kristensen on how the recent introduction of the W76-2 was the result of Pentagon planning a potential first strike scenario against adversaries, especially Iran.

While the authors of the February 2018 Nuclear Posture Review said that the new warhead was "not intended to enable, nor does it enable, 'nuclear war-fighting.' Nor will it lower the nuclear threshold," critics have long argued that such a tool could be viewed as more usable in the event of a potential war scenario.

The W76-2 is estimated to produce about an explosive yield of about five kilotons, about a third of that produced by the atomic bomb dropped on the Japanese city of Hiroshima by the U.S. military in the final days of World War II in August 1945. Other Trident missiles are equipped with either the W76-1, which produces around a 90-kiloton blast, or the W88, capable of unleashing around a 455-kiloton yield.

Though the W76-2 may appear milder in comparison, analysts point out just how destructive such a weapon really is in comparison with non-nuclear assets. Writing for the Bulletin of the Atomic Scientists, Belfer Center for Science and International Affairs Publishing Manager Andrew Facini said Tuesday that "it's worth noting that a six-kiloton weapon is still 500 times more powerful than the most powerful conventional explosive in the American arsenal."

This weapon, the GBU-43/B Massive Ordnance Air Blast, also known as "Mother of All Bombs" or "MOAB," produces a blast barely surpassing a .01 yield. President Donald Trump, who has championed the recent reforms to the U.S. nuclear arsenal, dropped the MOAB for the first time on a reported Islamist State militant group (ISIS) complex in Afghanistan in April 2017.

Facini describes these weapons "low-yield, high risk" in his article in the Bulletin, which just last week moved its Doomsday Clock to the latest to the closest its been to midnight—the apocalypse—since its inception by some of the atomic bomb's original creators in 1947. The dual threats of nuclear war and climate change have placed the clock at 11:20 p.m., leaving humanity "perilously close to obliterating itself," the Bulletin stated.

Non-proliferation activists say the W76-2 does little bring the world back from the brink. Tim Wright, treaty coordinator of the 2017 Nobel Peace Prize-winning International Campaign to Abolish Nuclear Weapons, called the new nuclear warhead deployment an "alarming development that heightens the risk of nuclear war."

"The United States' new 'low-yield' nuclear warheads are still powerful enough to kill many tens of thousands of people," he tweeted Wednesday.

Nuke Map, a tool developed by Stevens Institute of Technology nuclear history expert Alex Wellerstein, estimates the aftereffects of hypothetical nuclear detonations using various parameters such as kilotons, location and the type of impact. A Trident W76-2 hitting Newsweek's offices in lower Manhattan, for example, could kill nearly 80,000 people, injure over 170,000 more and leave radioactive fallout debilitating much of the southern tip of the borough, according to the tool.

Such casualties vary wildly between civilian and military targets, but as 1945 showed, this line may quickly blur with such weapons of mass destruction. As Newsweek reported earlier this month, U.S. Strategic Command's Global Thunder 20 exercise in October—although certainly threatening to Iran—focused on Russia, which the Pentagon believes has developed low-yield nuclear devices of its own.

The exercise was the first to be conducted entirely at the U.S. military's new Command and Control Facility located Offutt Air Force Base in Nebraska. Navy Vice Admiral Dave Kriete was quoted describing the new headquarters as "the first visible sign of how we are modernizing our nuclear force."

"Testing our ability to communicate, make decisions, and thwart threats is key to validating strategic deterrence," said Strategic Commander commander Navy Admiral Chas Richard said. "The American people and our allies can rest assured that our forces are ready, if ever called upon."