This month the most extremist elements of Europe’s radical right will mobilize in marches, concerts, and remembrances of the defeat of Nazi Germany. They are also hoping an election in Slovakia, will provide them with a victory at the ballot box. 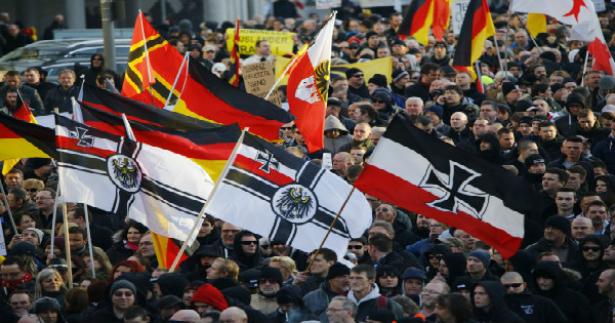 Far-right demonstration in Cologne, Germany led by the Patriotic Europeans Against Islamization of the Occident (PEGIDA) movement and the right-wing extremist Pro Germany Citizen’s Movement., Reuters

February 2020 will be a busy month for some of the extreme elements of Europe’s radical right. Multiple events are expected: marches, concerts, an election in Slovakia where a radical right party is second in the polls, in addition to the continent’s radical right fringes remembering the 75th anniversary of the last days of World War II in their own way.

On February 11, 1945, tens of thousands of Nazi German and collaborating Hungarian troops, along with a number of civilians, tried to break through the Soviet Red Army siege of Budapest. While several thousand civilians and several hundred soldiers managed to reach the Nazi German front lines away from the besieged city, the majority of attempted escapees, civilian and military, were killed or captured by the Red Army. Budapest fell to the Red Army two days later.

For Hungary’s radical right, the attempted breakout by Nazi and pro-Nazi forces has been a day to commemorate since the 1990s. And 2020 will be no different, as the radical right Légió Hungária is hosting a commemorative event and concert, “Festung Budapest” (Fortress Budapest), or the “Day of Honor” on February 8.

Légió Hungária is a relatively new radical right group, but they have already made international news for attacking and vandalizing the Aurora community centre in October 2019.

They won’t be doing it alone. Last year’s event featured several hundred members of radical right and outright neo-Nazi groups from across Europe, including Ukraine’s neo-Nazi Karpatska Sich, the Nordic Resistance Movement, Germany’s Die Rechte (“The Right”), Bulgaria’s Bulgarian National Union (BNS) and Blood and Honour (B&H) comrades from Serbia. The event featured a speech from German Die Rechte member Matthias Deyda quoting Hitler about what would happen if “our old enemy and adversary tries again to attack us.” Also attending the event was a man in a t-shirt with an image of Hitler on the front, who shouted “Juden raus!” (“Jews out”) and gave Nazi salutes.

This year promises much of the same, including a concert that will feature a number of bands with long histories in Europe’s radical right music scenes, including Germany’s FLAK, Hungary’s Fehér Vihar (“White Storm”), and Italy’s Green Arrows, who have a sponsorship deal with Ukrainian neo-Nazi clothing brand Svastone.

The week after, one of the long-time main events for the continent and especially Germany’s radical right will take place in Dresden, remembering the 1945 Allied bombing that took the lives of an estimated 25,000 people. Dresden continues to be plagued by radical right extremism – in November 2019 the city council passed a resolution declaring a “Nazi emergency” in the city, and six extremists were recently given jail sentences for being part of a Dresden-based radical right group that attacked a refugee accommodation facility.

Antifascist activists in Dresden have warned that radical right forces, for the 75th anniversary, “will make a committed effort to organize a particularly big and impressive march in Dresden in this anniversary year.”

A less well-known commemoration is taking place in southeastern Europe the weekend after. On February 22 the Bulgarian capital of Sofia will once again be home to the Lukov March.

Hristo Lukov was a pro-Nazi general who pushed hard for Nuremberg-style laws to be passed in Bulgaria, and was assassinated in February 1943 by communist partisans. Since 2003 the Bulgarian National Union (BNS) has hosted this march honouring Lukov, continuing to claim that the Nazi collaborator was a Bulgarian hero – and, despite all evidence to the contrary, continuing to claim that march participants aren’t anti-Semitic or radical right extremists.

In recent years the mayor of Sofia has tried to ban the march, only to have courts overturn the ban and allow the march to take place through Sofia’s central streets. Last year’s march featured an estimated 2,000 participants from radical right extremist groups across Europe, including the Czech Národní a sociální fronta (National and Social Front; NSF), Germany’s Die Rechte, and the Nordic Resistance Movement. Some of these groups have since formed a radical right alliance they call “Fortress Europa,” a grouping that includes Légió Hungária.

The Lukov March will also include a Bulgarian group called White Front, whose closeness to BNS and presence in last year’s Lukov March – marching near the front of the column – pours cold water on the organizers’ continued claims that the march isn’t a meetup for neo-Nazis and anti-Semites. White Front, linked with the violent neo-Nazi Vorherrschaft Division, is overt with their anti-Semitism; they recently published a post about “Jewish Satanism” on their website unironically quoting The Protocols of the Elders of Zion.

The continent’s radical right fringes might be able to end the month with a victory at the ballot box. In Slovakia, parliamentary elections are taking place on February 29. With the country’s governing parties reeling from a series of scandals, including the murder of journalist Jan Kuciak and his fiancée Martina Kusnirova, Slovakia’s radical right is trying to take advantage. Recent polls suggest that the People’s Party – Our Slovakia (Ľudová strana – Naše Slovensko, ĽSNS), led by Marian Kotleba, may finish as high as second in the polls, up from fifth place in 2016. This could put the party known for its harsh anti-Roma rhetoric and praise for the Nazi-era Slovak puppet state, in a position of influence, or possibly even part of the government.

Kotleba’s ĽSNS denies being a neo-Nazi or extremist party – the leader has sued outlets before for calling him and his party “neo-Nazi” – but its past is well documented. Before he became governor of the Banska Bystrica region in 2013, Kotleba used to appear in public wearing a uniform modelled on the Hlinka Guard, the militia of the Nazi puppet state in Slovakia; he was arrested for shouting out the militia’s greeting at a 2009 event honouring the puppet state’s founding.

While Kotleba and colleagues no longer march around in suspiciously Nazi-like uniforms, their extreme anti-Roma, anti-Muslim rhetoric and the actions of members and candidates of their party, from donning swastika tattoos and denying the Holocaust, to singing in a neo-Nazi band called Juden Mord, to signing checks with obvious neo-Nazi symbolism, makes clear the party hasn’t at all lost touch with its extreme roots. A strong showing on February 29 wouldn’t just be a victory for Kotleba and friends, but for the entire continent’s radical right.

[Michael Colborne is a Canadian journalist and former social/health researcher based in Prague. He tweets at @ColborneMichael.]