food The Difference Between Yams and Sweet Potatoes Is Structural Racism

In the United States, the terms “yam” and “sweet potato” are used interchangeably, but they are completely different vegetables. The mix-up between yams and sweet potatoes originated from the Trans- Atlantic slave trade. 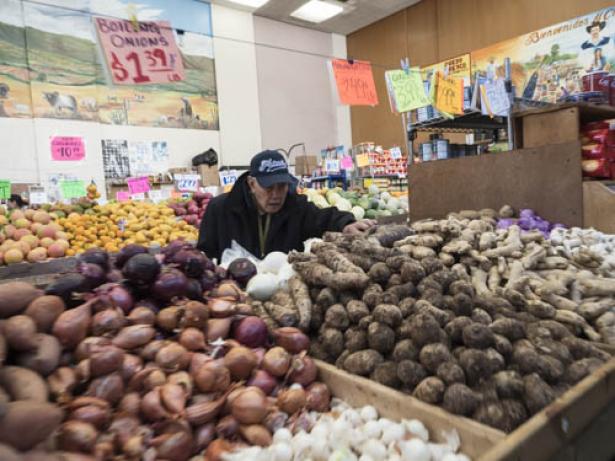 Yams and sweet potatoes have different origins as well as different meanings, jeannetteferrary.photoshelter.com

The confusion goes all the way back to the Trans-Atlantic slave trade.

When Adaorah Oduah attended her first American Thanksgiving feast at an aunt’s house in San Bernardino County in 2018, she was looking forward to one dish in particular: candied yams. Oduah had recently moved from Nigeria to California to study for a master’s in Global Communication at USC, and the yam was a food that reminded her of home.

“As a West African, I’ve had yam all ways: fried, boiled, porridged, pounded, souped, and even coated, but never ever candied,” Oduah wrote in an essay for Ampersand LA. The candied yam was the final frontier of innovation with the tuber. But at her aunt’s house, Oduah found a totally unfamiliar dish, a casserole of “orange blobs drenched in sugar and butter” that was nothing like the root vegetable she was familiar with. “Until now, I had presumed that yams needed no introduction, but upon coming face to face with its transatlantic imposter, I believe I need to make one on its behalf.”

In the United States, the terms “yam” and “sweet potato” are used interchangeably, but they are completely different vegetables. Yams are starchy and have a rough, brown exterior. They can grow up to 45 feet long and are eaten in parts of Latin America, West Africa, the Caribbean, and Asia. Sweet potatoes are a New World root vegetable, have a softer, reddish skin, a creamier interior, and often, a darker interior. Most American supermarkets are selling you sweet potatoes, not yams. To find the yam that she was familiar with, Oduah had to trek to an African market that imported them from Ghana.

The mix-up between yams and sweet potatoes originated from the Trans- Atlantic slave trade. Yams are an important part of West African food traditions. European slave traders steered their ships across the Middle Passage, they packed yams, along with black-eyed peas, to feed their captives. Slave merchant John Barbot estimated that 100,000 yams were required to sustain a ship bringing over 500 enslaved people, just 200 yams per person for a journey that could take months. In the Americas, where yams were not readily available, sweet potatoes, which had traveled from Central America with Christopher Columbus, took their place. As Dr. Scott Alves Barton, a chef and culinary educator who teaches at NYU, wrote in the February issue of Food & Wine , sweet potatoes became one of several transfer foods, a throughline allowing enslaved peoples to preserve their traditions and spiritual practices even in the face of captivity and abuse.

Even the word “yam” is an echo of the West African heritage of the vegetable—as Barton explained on a phone call, it has roots in the words “nyami,” “nyam,” or “enyame,” which mean, in different West African languages, literally, “to eat.” That’s how crucial yams were and are to the regional diet. “These foods in the African context have a religious significance, and a cultural heritage,” Barton said in a phone interview. “They gave the enslaved a reference.”

Nor is that spiritual connection just a historical remnant. To Oduoh, that was part of why the candied yams were a surprise. “Where I’m from, my people, the Igbo, consider Yam the king of crops,” she wrote me in an email. “We even have a whole festival celebrating a new harvest, ‘New Yam Festival,’ [where] the first yam from the harvest is offered to the spirits, a.k.a. our ancestors. Honoring the people that came before us is a big deal, and Yam is one of the few remaining physical representations of a dwindling tradition.”

In the United States, the yam and sweet potato conflation was further inculcated thanks to a marketing campaign for the trade group Louisiana Sweet Potatoes. Researcher Julian C. Miller developed a new variety of sweet potato at the

Louisiana Experiment Station that had creamier, less stringy flesh, a more tender skin, and a higher content of vitamin A than the other sweet potatoes on the market. To distinguish these new sweet potatoes from their East Coast counterparts, the Louisiana sweet potato industry started using the term “yam.” Today, California sweet potato growers, where a huge number of sweet potatoes are grown commercially, are working to drop the word “yam,” and the USDA requires “yam” to be accompanied by “sweet potatoes” in official descriptions.

But the confusion persists among the American public, and the perpetuation of sweet potatoes as yams is a testament to how deeply West African food traditions undergird American cuisine. The mix-up has roots in the structural racism that built the country, but the use of sweet potatoes as yams by African- Americans is ultimately a result of resilience and innovation.

Oduah’s feelings toward candied yams have since changed, and now she has a fondness for the dish.“I wish [Americans] knew how versatile and delicious yams are. I personally believe the yam deserves to be where French fries are,” she wrote. “I wish more people knew the history there.” Or, as Dr. Barton wrote, “As the sweet potato takes up the role of the yam—foodstuff for sacred twins and ancestors—it epitomizes the creativity of the diaspora.”

For more on 400 years of African-American cooking, check out "The Original Innovators."