"The one percent may be powerful, but there are a lot more people in the 99 percent." 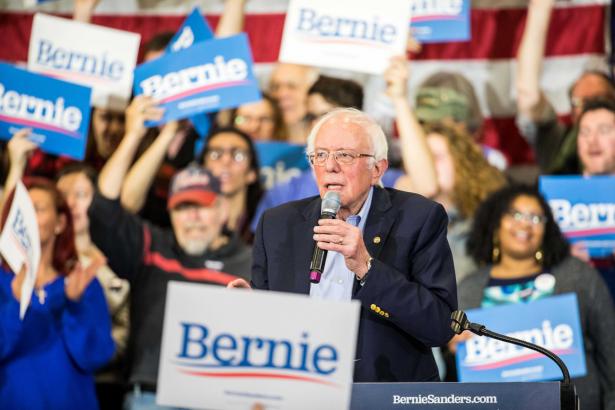 Sen. Bernie Sanders exhorted around 6,000 supporters at Southern New Hampshire University's Whittemore Center in Durham, New Hampshire Monday night to get out the vote and bring the "Not me, us" movement to the White House in November's general election against the incumbent President Donald Trump.

"Donald Trump intends to win reelec dividing color of skin, ethnic background, gender, and sexuality," said Sanders. "We are going to do exactly the opposite we are going to bring our people together."

"We're coming together in the strongest grassroots movement in the history of American politics," Sanders thundered to deafening applause in the arena.

The senator addressed the crowd after a concert by bands Sunflower Bean and the Strokes and speeches by Rep. Alexandria Ocasio-Cortez, campaign co-chair Nina Turner, and others.

"We have to nominate somebody with a political revolution at their back," said Ocasio-Cortez.

Turner said that Sanders represents a radical opportunity for the country, and called the senator a "champion." Referring to comments from centrist Democrats like James Carville questioning the practicality of Sanders' positions, Turner listed the challenges faced by the U.S. and told the crowd half measures were insufficient.

"If you're out in the middle of an ocean drowning, who do you want to save you?" Turner asked the crowd. "Someone who's practical, or someone who's radical?"

Education was a key part of Sanders' message as the senator called for teachers to receive salaries of at least $60,000 and for the end of student debt. The senator also emphasized his universal healthcare message, hit Wall Street and billionaires, and pushed for immediately addressing the climate crisis and ending mass incarceration.

It was a closing argument for the senator, who hopes to have a significant showing in New Hampshire on Tuesday before he heads to the next early states Nevada and South Carolina.

Sanders saw a boost in national polling numbers over the weekend and on Monday. As Common Dreams reported, a Quinnipiac University poll released Monday showed the senator taking a commanding lead nationally over his rivals and in a statistical tie for "electability" with former Vice President Joe Biden, whose numbers are falling after a fourth place finish in the Iowa caucuses.

Sanders asked the crowd to consider their place in history.

"The world is looking at you, New Hampshire," he said. "What you do will have international consequences—it defeats the most dangerous president in history but it also begins the movement to create an economy and government that works for all of us, not just the one percent."

"The one percent may be powerful, but there are a lot more people in the 99 percent," Sanders added. "Let's go forward, let's win this thing, and let's transform America."